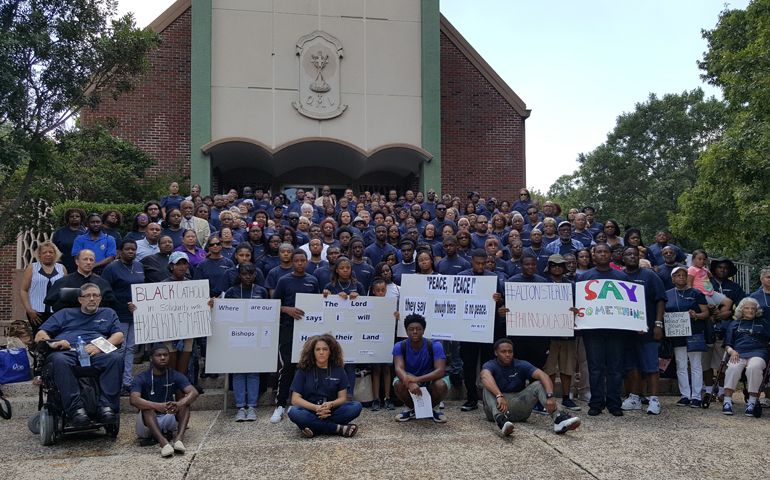 In the world of African-American Catholic life, San Antonio was the place to be July 5-9. The annual Archbishop Lyke Conference, named for the late former Atlanta archbishop James P. Lyke, was to explore and celebrate liturgy and worship in the black American tradition. The expectation was that there would be joyous song, praise, and dance at the meeting, held at the Oblate School of Theology.

And then reality hit. As word spread about the killing by police of Alton Sterling on July 5 and Philando Castile on July 6, young black men in Louisiana and Minnesota, respectively, joyous praise no longer was appropriate.

"We can't just be happy," said one young participant.

The youth at the conference led the way in redirecting the meeting agenda, according to Jesuit Fr. Joseph A. Brown, professor of Africana studies* at Southern Illinois University, the conference keynoter.

"We shifted to real-world issues," Brown told NCR, noting that the conference atmosphere abruptly changed. At its conclusion, a photo of participants included young people holding signs proclaiming "Black Catholics Support Black Lives Matter" and "Where Are Our Bishops?"

A sprinkling rite included the names of young black men killed by police. Brown told NCR that in response to the anger and pain felt by many African-American Catholics, bishops across the nation should hold rites of reconciliation in their cathedrals to address the sin of racism.

Other black Catholic leaders last week called on the church to be unambiguous in its condemnation of violence, particularly regarding police officers who kill young black men. They argued for increased and better police training, and overcoming what they said was a reluctance among some bishops to speak out because many Catholics work as police officers.

"It's shocking and deplorable that this is happening so frequently in different parts of the country," said Fr. Kenneth Taylor, pastor of Holy Angels Catholic Church in Indianapolis and president of the National Black Catholic Clergy Caucus. He said the shootings of young black men by police is something "I have not seen on the radar" of the national conference of bishops.

"There is an element of the church that doesn't want to look like they are going against law enforcement," he said.

He said that community policing strategies have improved police/civilian relations in Indianapolis. It's common, said Taylor, for police to meet with students at his parish school, which is predominantly African-American.

But the recent shootings, he said, are bound to increase tensions. "It's going to put more on edge. It has a potential for really escalating out of control."

Milwaukee-based Franciscan Sr. Callista Robinson, president of the National Black Sisters' Conference, said there is a need "to excise the sin of racism" in the country. She suggested that better police training could be a start in curbing police shootings.

Her organization was founded in 1968, a particularly turbulent year for race relations, including the assassination of Martin Luther King Jr. and riots across the country. The group was formed to address issues of racism in the church and to spur action on justice concerns.

"We are facing the same issues we faced in 1968," said Robinson.

She said the shootings of five police officers in Dallas on July 7 by an Army veteran with a vendetta against police, "will not help the situation. ... The violence has to stop. We have to look at ways to make that happen."

Fr. Michael Pfleger is a white priest and pastor of St. Sabina Church in Chicago, a largely African-American congregation. Pfleger has a long history of social activism, and is known for a prophetic speaking style, akin to that of African-American preachers.

He noted that this month is the 50th anniversary of King's march in Chicago, an effort to address racism and segregation in a large northern city. That effort was met with large-scale resistance at the time.

"We can take all he said then and just change the date," said Pfleger. "It is the same reality."

He said outrage should exist about the shootings by police of black youths across the church, not just in African-American parishes.

"The wealthy and the removed are co-conspirators," he said. "It is not a time for anyone to be silent. The church will become what she is called to be or become irrelevant," he said.

In a column shared on the website of CBS-affiliate station WWL-TV, Redemptorist Fr. Maurice Nutt, director of the Institute for Black Catholic Studies at Xavier University in New Orleans, addressed the killing of Sterling in nearby Baton Rouge, La.

He noted that African-American men comprise about a quarter of Baton Rouge's population, but are 100 percent of those recently killed by police officers.

"This is an American dilemma that transcends Baton Rouge. That city just happened to have the latest videotaped killing of a black man," he wrote.

He addressed criticism of the Black Lives Matter movement for its focus on young black men being killed by police.

"Why does this mantra infuriate some in the dominant culture? Is it not a prerogative of any ethnic group to affirm their right to exist and not be killed? When people rebuff the purpose of the Black Lives Matter movement by insisting, 'All lives matter,' they not only miss the point that all lives are not at risk but also further diminish the realities of racism and oppression in our country," he wrote.

He wrote that Black Lives Matter is needed because young black men are nine times more likely to be killed by police than other Americans.

"Peace is not a polite conversation between the oppressor and the oppressed. Peace is dismantling the hierarchies of oppression," he wrote. "Peace is redistribution of the economic and social power. Peace does not come from seeking the lowest common denominator, but in seeking radical and universal principles that will be fair to all."

Fr. Bryan Massingale, a priest of the Milwaukee archdiocese who will begin teaching theology at Fordham University in New York this fall, commented that too many recent church statements focus on racial relationships, not racial justice. He said there is a "disembodied spirituality" apparent among many priests, who are ill-prepared to confront justice issues in their pastoral work.

He said bishops should pay attention to four factors in dealing with July's crisis:

At St. Benedict Catholic Church in Oakland, Calif., a largely African-American church, pastor Fr. Jayson Landeza asked parishioners to share their thoughts on the situation at Masses the weekend of July 9-10. What he found echoed much of what was said at San Antonio's Archbishop Lyke Conference.

"Incredible pain (and) fear that our society has taken a step back regarding race relations and how African-Americans are perceived," Landeza shared on his Facebook page. "Terrified for their sons and grandsons, particularly regarding interactions with law enforcement. Angry about the killings of Alton Sterling and Philando Castile. Heartbroken about the killing of the five Dallas officers. Much tears shed."

*This story has been updated to correct Jesuit Fr. Joseph A. Brown's title.

Editorial: Defund the police — or at least de-escalate their excessive use of violence