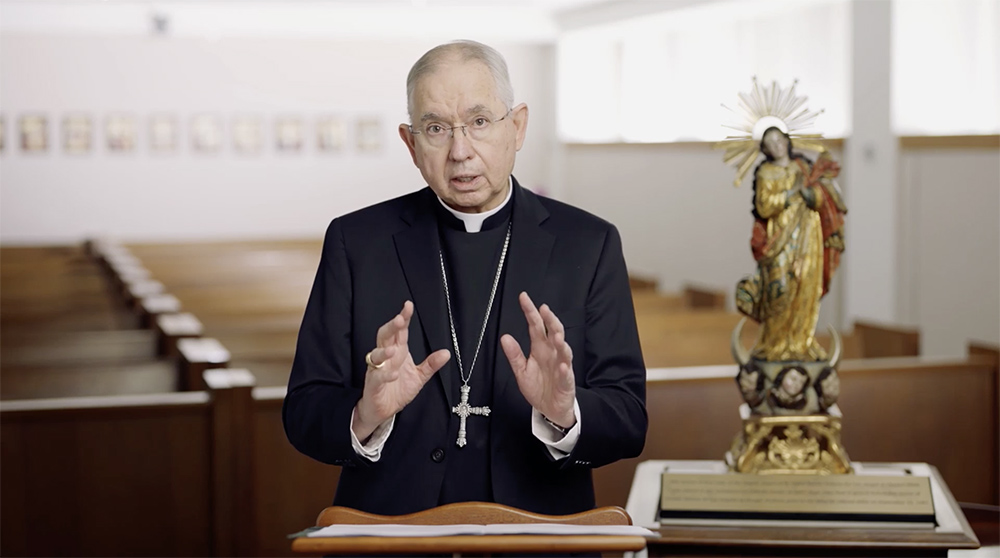 Fr. Bryan Massingale, a leading Catholic theologian in the U.S., says he read Los Angeles Archbishop José Gomez's Nov. 4 speech to a Catholic group in Spain with "dismay and disbelief."

Gomez, who is also the president of the U.S. Conference of Catholic Bishops, claimed that some modern social justice movements were Marxist-inspired, anti-Christian "pseudo-religions."

"He has a serious misunderstanding, and perhaps even a willed ignorance, about the goals and motivations of contemporary social justice movements," said Massingale, a Fordham University theologian and author of Racial Justice and the Catholic Church.

Massingale and other Black Catholics told NCR that they were appalled at how Gomez framed today's social justice activism, including the anti-racist movement in the United States, as an angry expression of a corrosive secularism being pushed by an "elite leadership class."

"For example, he blanketly characterizes social justice movements such as Black Lives Matter as pseudo-religions based on profoundly atheistic ideologies that are hostile to Catholic belief," Massingale said. 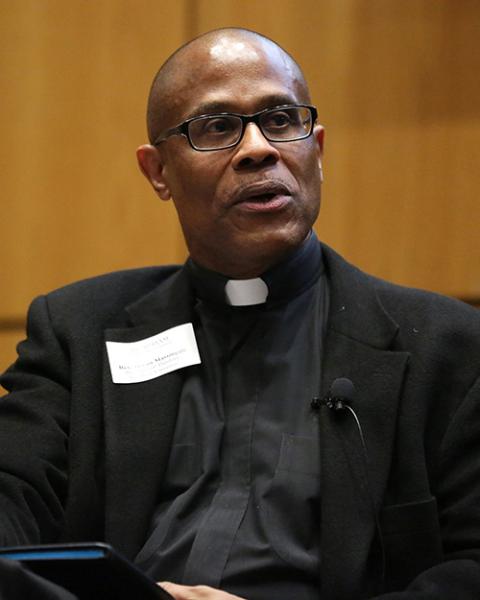 Tia Noelle Pratt, director of mission engagement and strategic initiatives and a sociology professor at Villanova University, said Gomez's talk sends a message to Catholics who are people of color or involved in anti-racism that the bishops' conference president does not stand in solidarity with them.

"This is beyond disappointing because the president of the [conference] should, in fact, do more than stand in solidarity. He should be an anti-racism activist in his own right," Pratt said.

Alessandra Harris, a cofounder of Black Catholic Messenger, an online publication, told NCR that one of her immediate takeaways from Gomez's speech was "how out of touch and erroneous" his interpretation of social justice movements in America is.

Harris noted that Pope Francis, in an Oct. 16 video message to the fourth World Meeting of Popular Movements, commended activists who protested against police brutality and racism as the "Collective Samaritan" who did not turn away when they saw "the wound to human dignity, afflicted by such an abuse of power."

Harris said, "Today's social justice movements are rooted in the very ideals that Catholics profess: that all life is sacred, that the least among us deserve respect and protection, and that we must strive to end oppression and hatred."

Harris also suggested that Gomez's message sought to "erase the voices of millions" of Catholics and Christians of color who are involved in the anti-racism movement.

"Seventy-nine percent of Black Americans identify as Christian, and you better believe most of those people are also against racism," she said. "He is revealing the blind spot that many leaders in the church have."

A spokeswoman for the Los Angeles Archdiocese told NCR that Gomez was unavailable for an interview because he was traveling this week.

Gomez delivered his address to the Congress of Catholics and Public Life in Madrid by video. He is due to travel to Baltimore later in the month for the fall assembly of the U.S. bishops' conference, which is being held Nov. 15-18.

In his speech, which the archbishop tweeted, Gomez analyzed the modern social justice movement through a distinctly conservative political lens. He used terminology popular in right-wing media such as "wokeness" — a term conservatives often use to dismiss social justice activism.

Gomez also suggested that today's social justice movements all originate from "the same Marxist cultural vision." He made an apparent nod to conservative anger over critical race theory when he said that "even public schools are actively promoting and teaching this vision."

The archbishop further warned that the traditional Christian perspective is being "canceled" from public life.

"With the breakdown of the Judeo-Christian worldview and the rise of secularism, political belief systems based on social justice or personal identity have come to fill the space that Christian belief and practice once occupied," said Gomez, a Mexican-born prelate who in 1978 was ordained a priest of Opus Dei, a widely conservative Catholic movement.

Gomez discussed today's social justice activism against the backdrop of "a global movement of secularization and de-Christianization" that he argued is championed by elites who are uninterested in religion and have "no real attachments to the nations they live in" or to local traditions and cultures.

"The new social movements and ideologies that we are talking about today, were being seeded and prepared for many years in our universities and cultural institutions," said Gomez, who also attributed the COVID-19 pandemic, social isolation and the May 25, 2020, murder of George Floyd with causing those movements to be "fully unleashed in our society."

Early in the speech, Gomez did acknowledge that Floyd's murder by a white police officer, which sparked nationwide protests, was "a stark reminder that racial and economic inequality are still deeply embedded in our society." But he argued that modern social justice efforts, including the antiracism movement, "cannot promote authentic human flourishing" because, he said, they "deny the human person."

But just because a movement is secular doesn't mean it is anti-Christian, said Pratt, who curates the #BlackCatholics Syllabus, a collection of resources related to Black Catholics in the United States.

"George Floyd's murder only revealed injustices in our society to those who were wearing blinders. For the rest of us, Mr. Floyd's murder amplified and shone a spotlight on what we already knew," she said.

Pratt added that Gomez's description of social justice movements as "pseudo-religions" that are "rivals to traditional Christian beliefs" is "an affront to the important work" of those involved in those movements, especially young people. 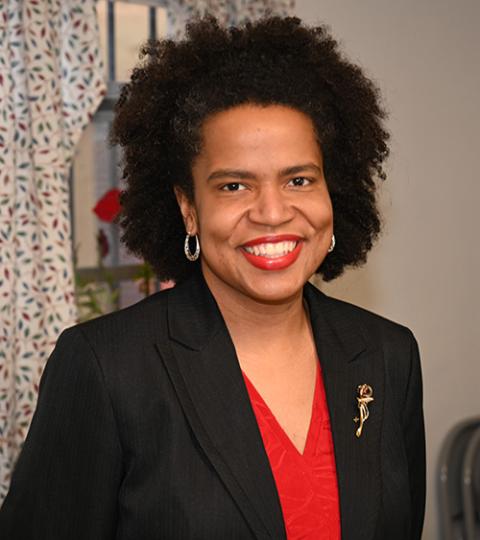 Pratt criticized another portion of Gomez's speech where he discussed the "woke story of salvation" that he characterized as being defined by harmful power struggles and political allegiances based on race and class.

"This is dismissive not only to the nuance of the analysis, but also to the faith-based organizations — be they Catholic, rooted in another tradition, ecumenical, or interfaith — that are doing the painstaking and necessary work of bringing about a better world," Pratt said.

As far as offering an alternative to social justice movements like Black Lives Matter, Gomez offered an answer he called "simple": "We need to proclaim Jesus Christ. Boldly, creatively."

Said Gomez: "The Gospel remains the most powerful force for social change that the world has ever seen. And the Church has been 'antiracist' from the beginning."

However, the archbishop's statements ignore the historical reality that Christians, including the Catholic Church, have historically been complicit in systemic racism and other injustices, including slavery, said Harris of Black Catholic Messenger.

"So, unfortunately, Christianity has lost the moral authority for too many people," Harris said.

Massingale, of Fordham University, said Gomez rejects social justice movements because they are ostensibly based on "identity politics." But, said the theologian, Gomez says nothing about similar dynamics behind the Jan. 6 insurrection at the U.S. Capitol or ongoing efforts in conservative states to restrict voting access, which Massingale described as attempts to shore up white political dominance.

"White nationalism is the real idolatrous pseudo-religion that poses a grave threat to both national unity and authentic Christian faith," Massingale said. "Yet, the archbishop suggests that the forces that oppose this movement are the real threats to genuine religion."

Said Massingale: "What especially saddens me is that there is no evidence that the archbishop, as president of the nation's bishops, made any effort to use the best scholarship on contemporary social justice movements that is available in the American church."

"There are many committed Catholic scholars, especially those of color, who could have provided him a more accurate perspective on contemporary events," said the theologian.

A version of this story appeared in the Nov 26-Dec 9, 2021 print issue under the headline: Black Catholics dismayed with Gomez's social justice speech.