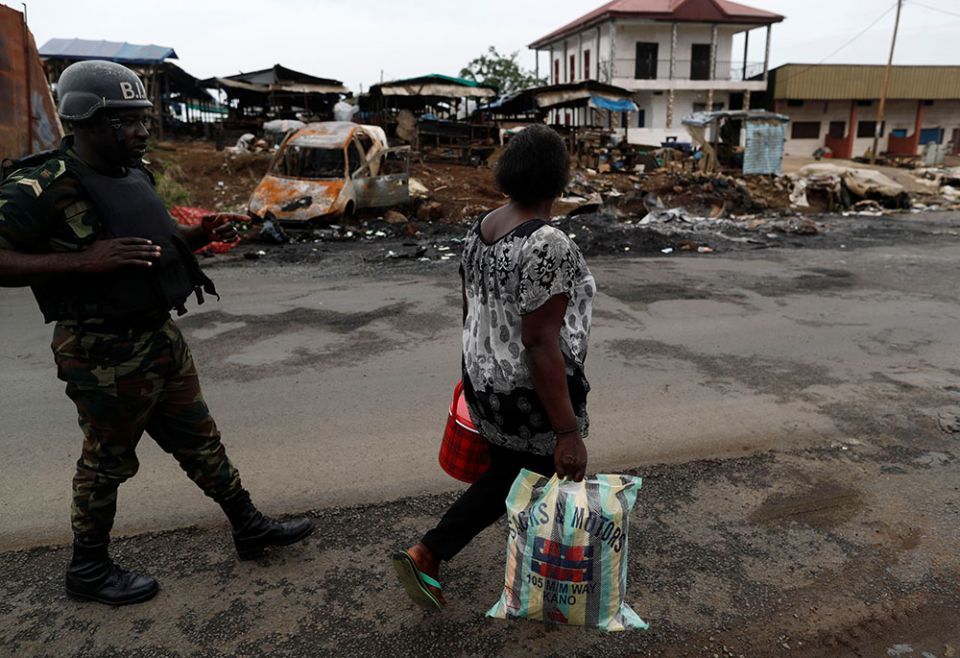 A woman walks past a soldier of the Cameroon army's elite Rapid Intervention Battalion in the city of Buea in the Anglophone Southwest Region Oct. 4, 2018. (Newscom/Reuters/Zohra Bensemra)

In recent NCR interviews, three prelates suggested that Biya's government had initially underestimated the growing influence of those calling for the creation of a new, separate state and then responded with disproportionate force.

Retired Archbishop Cornelius Fontem Esua, who led Cameroon's Bamenda Archdiocese from 2006 to 2019, said Biya had erred drastically in late 2017 when he pledged to "eliminate" independence fighters.

"Violence only begets violence," Esua told NCR. "The moment the government started using live bullets on peaceful protesters, it was evident that things would simply go out of hand." 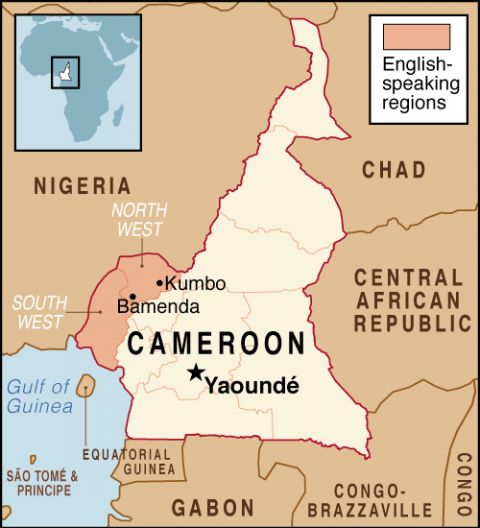 The conflict had erupted in Cameroon's Northwest and Southwest regions earlier in 2017 when protests against new government-appointed judges in the regions turned violent. As government forces responded with lethal force, tensions mounted and many English speakers in the predominantly French-speaking country started asking for independence.

The ensuing conflict between separatist fighters and government forces has killed at least 3,000 civilians, according to Human Rights Watch. The Internal Displacement Monitoring Centre estimates that at least 460,000 have been forced to flee the affected areas, with tens of thousands seeking refuge in neighboring Nigeria.

The Catholic bishops said the government has been too violent in its response to those seeking to form an English-speaking state.

Esua said Biya's 2017 pledge effectively made clear that "anybody who identified himself with the Anglophone cause was considered a terrorist."

After two years of fighting between the two sides, Biya called for a one-week "Major National Dialogue," held Sept. 30-Oct. 4, 2019. However, the president said the dialogue would not only consider the insurgency but also "issues of national interest such as national unity, national integration and living together."

Bishop George Nkuo, who has headed the Kumbo Diocese in the Northwest Region since 2006, said that approach was wrong because it didn't address the urgency of the Anglophone problem.

Nkuo said the forum should have been used to discuss the Anglophone problem and not all the problems of the nation. He said it was necessary to use that dialogue to revisit the root causes of the conflict as the only possible way of bringing forth a sustainable solution.

And the causes of the problem, he said, are rooted in Cameroon history. Initially colonized by Germany in 1884, Cameroon would be divided between Britain and France after the defeat of the Germans in World War I.

Britain got one-fifth of the formerly German territory, which it administered as part of Nigeria until 1961 — when through a plebiscite, the British Southern Cameroons (as the British administered entity of Cameroon was then called) voted to reunite with the part formerly administered by France (which had gained its independence in 1960).

The two entities went into a federal structure of government, with each entity allowed to freely run its affairs in line with the systems inherited from the colonial powers. But in recent years, some people in the English-speaking regions had accused the central government of trying to quash their traditions. 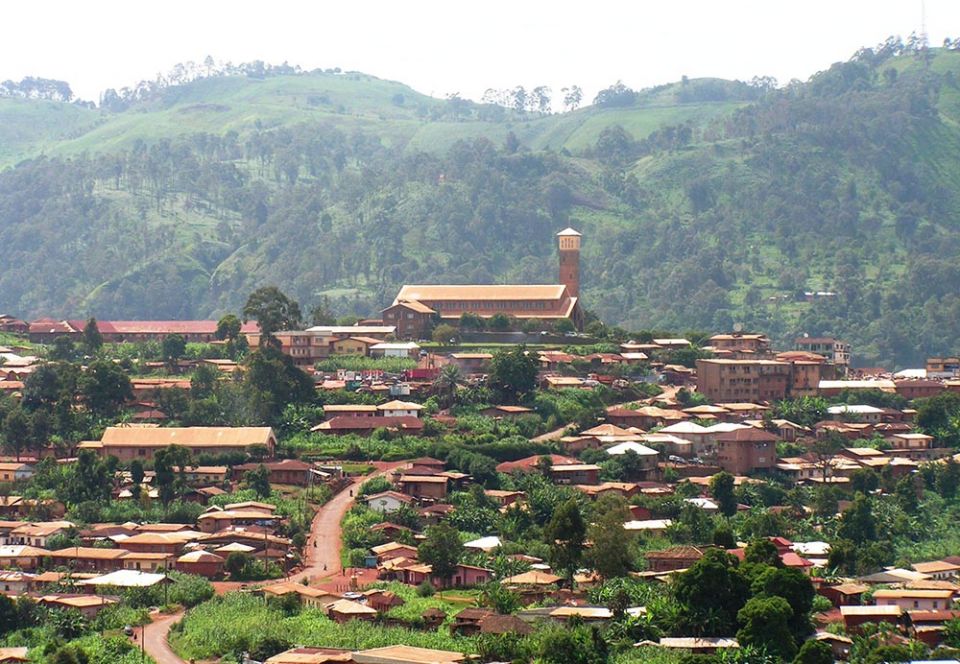 A view of the Catholic cathedral of Kumbo, in Cameroon's English-speaking Northwest Region (Wikimedia Commons/Kintong)

In 2016, four Catholic bishops in the English-speaking regions accused Biya's government of trying to strangle their culture.

"Anglophone Cameroonians are slowly being asphyxiated as every element of their culture is systematically targeted and absorbed into the Francophone Cameroon culture and way of doing things," they wrote at the time.

Nkuo said the 2019 dialogue should have revisited these historical perspectives to come up with the right answers to the problem. The current archbishop of Bamenda, Andrew Nkea Fuanya, criticized the format of the dialogue, saying it didn't involve the appropriate representatives of the English-speaking regions.

"That wasn't a dialogue at all," Fuanya told NCR.

Esua was invited to participate in the dialogue.

"Ninety percent of the participants at the National Dialogue were all government people, or people with government allegiance, but the real persons with whom you had to dialogue were not there," said Esua.

Separatist leaders weren't part of the dialogue. Sesseku Ayuk Tabe, the recognized leader of the movement to form a new country of Ambazonia, was arrested in 2018 and is now serving a life sentence.

"You couldn't talk of a dialogue if these people weren't there," Esua said of the separatist leaders' absence at the negotiating table.

Nevertheless, the dialogue came up with a number of recommendations, including the adoption of a special status for the two Anglophone regions, the immediate relaunch of certain airport and seaport projects in the regions, the rapid integration of ex-combatants into society, and a hastening of decentralization of power away from the central government.

Esua said none of these recommendations responds to the demands of Cameroon's English speakers.

He said he was frustrated that a "special status" for Anglophone regions should even come up as a recommendation, since it's something already enshrined in the country's 1996 Constitution.

"It's not a question of a special status, because it's not a gift they are giving to the Anglophones. The Anglophones have a right to organize themselves according to their customs and cultures as inherited from the British," said Esua.

He also blasted the recommendation about hastening the decentralization process, noting that it was paradoxical that the government keeps the centralized structures in place and continues talking about decentralization.

"I'm afraid they are not giving the right solutions to the problem," said the retired archbishop.

[Ngala Killian Chimtom is a Cameroonian journalist who worked for state broadcaster CRTV from 2003 to 2017 before joining the BBC, where he worked from 2018 to 2021. He has written for Crux, DW, CNN, Dpa and Timescape Magazine.]