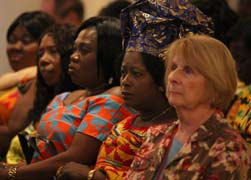 Women listen to a presentation Feb. 13 by Ghanaian Cardinal Peter Turkson, president of the Pontifical Council for Justice and Peace. He spoke on the first day of the 2011 annual Catholic Social Ministry Gathering in Washington. (CNS photo/Bob Roller)

There's no snow on the ground this year, John Carr said, but the annual Catholic Social Ministry Gathering is meeting in the midst of another storm: elected politicians ready to turn their backs on the poor.

Carr, executive director of the Department of Justice, Peace and Human Development at the U.S. Catholic bishops' conference, addressed the 2011 Catholic Social Ministry Gathering in Washington, a four-day annual gathering of more than 300 social ministry workers from around the country.

His address came the same morning that President Obama unveiled his budget for next fiscal year that included extensive discretionary spending cuts. Republican legislators responded by saying Obama had not cut enough from the budget.

Carr emphasized that the far-reaching cuts will have significant effects on the nation's poor.

This year's storm will last longer than last year's, Carr said. “The snow melted away but these costs will last...they will cost us economically, socially and morally.”

Carr cited Matthew 25 as the basis of the Church’s mission and continually highlighted the theme that the moral measure of a nation depends on how it treats its most disadvantaged.

Carr expressed disappointment in Congress since last year's gathering. He noted Congress' failure to pass the DREAM Act, as well as health-care legislation that doesn’t include federal funding for abortion, or comprehensive immigration reform.

Though Carr spoke passionately, the tone of this year’s speech was less optimistic than his speech last year and more cognizant of the difficult challenges that lay ahead.

Carr criticized Democrats and Republicans for failing to address the 14.3 percent poverty rate, the 20 percent poverty rate for children, and the 13 million unemployed, and called on Catholics of all political orientations to press Congress to protect the nation’s most vulnerable.

“We’re counter-cultural in Washington today,” Carr noted, in reference to the problems posed to Catholics by both major parties.

While lamenting the withering away of a “compassionate conservatism”, Carr also noted that Obama’s recent State of the Union was only the second time since 1948 that a sitting Democratic president had not mentioned the words “poor” or “poverty” in the address.

The annual Catholic Social Ministry Gathering is co-sponsored by a dozen Catholic organizations, including various departments of the U.S. Conference of Catholic Bishops, Catholic Charities USA, JustFaith, the Society of St. Vincent de Paul, the Conference of Major Superiors of Men, the Roundtable Association of Diocesan Social Action Directors, the Catholic Daughters of the Americas and Catholic Relief Services, among others.

[Cole Stangler is a freelance writer in Washington.]

Biden administration must include rural poor in his policies