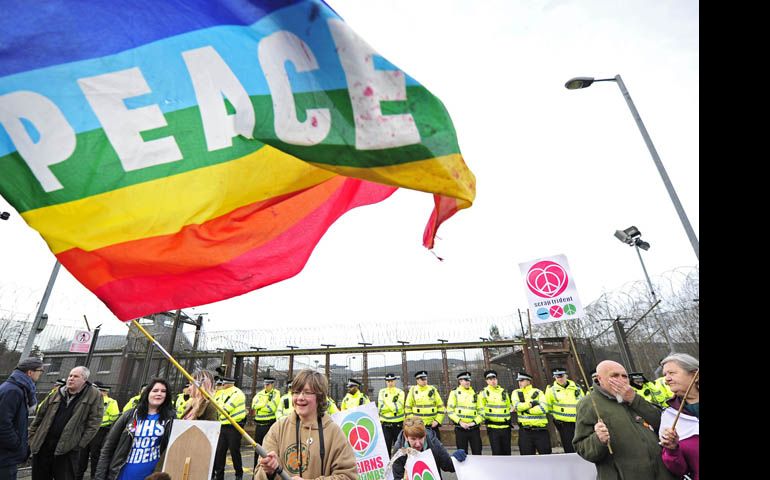 A woman waves a flag during a nuclear weapons protest April 13 outside Faslane Naval Base in Helensburgh, Scotland. (CNS/EPA/Joey Kelly)

Washington — It was April 11, 1963, as the Catholic church was in the midst of the Second Vatican Council, that St. John XXIII issued his landmark social encyclical Pacem in Terris ("Peace on Earth") that included a call for a verifiable ban on nuclear weapons.

More than 50 years later, the Holy See continues to make the moral case for nuclear disarmament.

The Vatican's most recent public comment came in December at the Vienna Conference on the Humanitarian Impact of Nuclear Weapons.

"The time has come to embrace the abolition of nuclear weapons as an essential foundation of collective security," the Vatican said in a paper titled "Nuclear Disarmament: Time for Abolition" delivered to the conference.

In it, the church held firm to its stance that any use of nuclear weapons was immoral and argued that the time has come to abandon nuclear deterrence -- the principle that such weapons might be used and that they exist to deter another country from using them. Previously, the Vatican conditionally accepted deterrence as "a step on the way toward progressive disarmament."

But that has not happened, and Archbishop Bernardito Auza, the Vatican's permanent observer to the United Nations, is likely to reiterate its call for total nuclear disarmament during the monthlong Non-Proliferation Treaty Review Conference opening April 27 at the United Nations.

"What [the Vatican in Vienna] noted 25 years after the Cold War is that deterrence, what was meant as a temporary position, has become permanent," said Bishop Oscar Cantu of Las Cruces, N.M., chairman of the U.S. bishop's Committee on International Justice and Peace. "And they said this is unacceptable.

"Look what the policy of deterrence means morally," the bishop continued. "In order for deterrence to work, you have to intend to use it. What does that intention mean? That means you are willing to use an indiscriminate weapons to kill innocent people. Again, that is not morally acceptable."

Franciscan Fr. Kenneth Himes, associate professor of theological ethics at Boston College, puts it more succinctly: "I do think the Holy See is becoming impatient with the complacency of the nuclear powers with the status quo."

Countries with nuclear arsenals include China, France, India, North Korea, Pakistan, Russia, United Kingdom and the U.S. Nuclear experts say Israel is a member of the nuclear club, as well. Israeli leaders have neither confirmed nor denied that possibility.

Catholic observers do not expect much progress toward the treaty's ultimate goal of the elimination of all nuclear weapons to come out of the conference. Still, church officials, Catholic think tanks and Catholic peace advocates have been preparing for the review conference for months through various events, including an April 9 symposium hosted by Auza at the U.N.

Stephen Colecchi, director of the U.S. Conference of Catholic Bishops' Office of International Justice and Peace, said the Vatican recognizes the world is more complex since the end of the Cold War, when the U.S. and Russia were the dominant nuclear powers, making a weapons ban more necessary.

While the two nations still possess the bulk of the world's nuclear weapons, countries such as India, Pakistan and China make for a less stable environment that complicates the road toward abolition, he said.

"We've got to get more bilateral reductions from the United States and Russia because they still have more than 90 percent of the nuclear weapons. Once they get low enough then you need multilateral negotiations to get down further and further," Colecchi said.

"We've got to keep it on the public agenda, in front of Catholics, in hopes of educating people," he said.

Cantu agreed in an interview with Catholic News Service, saying the church must continue to question the morality of stockpiling nuclear weapons.

Catholic peace advocates such as Marie Dennis, co-president of Pax Christi International, suggested that a separate treaty enacting a nuclear weapons ban may be the way to go.

"There's absolutely no reason why a ban treaty would interfere with the NPT process," said Dennis, who will be at the U.N. for the start of the conference as well as at events designed to build momentum for a ban in the days before the April 27 opening.

"Both the negotiation of a ban treaty and the process of implementing it educate people about the danger of nuclear weapons and puts pressure on nuclear weapons possessing states, or those who think that's how you gain power, to move in another direction," she told CNS.

Pax Christi is among dozens of peace groups meeting and marching in New York in the days leading to the conference. Pax Christi also sent a statement to Catholic members of Congress signed by more than 1,200 people and organizations calling attention to the church's stance. A copy of the Vienna statement and a letter from the Japanese bishops' conference addressing nuclear weapons on the 70th anniversary of the use of atomic weapons at the end of World War II also were part of the package.

Sr. Mary Ann McGivern, an NCR contributor and member of the Sisters of Loretto who served on her order's Committee for Peace, joined the Pax Christi delegation. She attended the 2005 review conference.

McGivern told CNS her community has proposed that the U.S. enact a unilateral nuclear weapons ban.

"We're saying that no matter what the rest of the world does, it's time for the United States to set aside our nuclear weapons," she said.

While it is unlikely that any proposal for quick action on a ban will find its way into the U.N. conference's final report, McGivern said she hopes the idea will begin to percolate among the delegates.

"The only way real abhorrence against nuclear weapons develops," she said, "is for people to gather, hear one another and take those ideas back home."

2017 was the year I started to take peace more seriously

We could all learn a lesson on disarmament from Archbishop Hunthausen