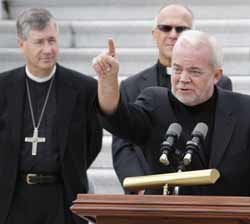 WASHINGTON -- Christian leaders and policy experts from across the political and religious spectrum released a set of proposals Feb. 17 that they say will, if adopted, ease the strain on the poor and those facing poverty.

Members of The Poverty Forum, an 18-member committee headed by the Rev. Jim Wallis, president of the progressive Christian network Sojourners, and Michael Gerson, a syndicated columnist and former chief speechwriter to President George W. Bush, outlined a plan

that calls on lawmakers to:

The Forum, funded by a grant from the Annie Casey Foundation, represents a bipartisan effort among faith leaders to put aside ideological differences and political point scoring, said Wallis. “It was about what is right and what works in terms of helping poor families,” he said. “The moral test, the religious test, and the biblical test of any society is how we treat the poorest and most vulnerable,” he said.

Among the Forum’s participants are Kathy Saile, director of Domestic Social Development for the US Conference of Catholic Bishops, James Capretta, a Fellow at the Ethics and Public Policy Center, Chuck Donovan, the Executive Vice President for Family Research Council, and Ronald Sider, President of Evangelicals for Social Action.

One Forum participant, Mary Nelson, a former community organizer and founder of Bethel New Life in Chicago, said she sees the faces of poverty every day: The woman who lost her house because the landlord went into foreclosure, the low-wage earner who works two jobs and struggles to make ends meet, and the man who came out of prison and can’t find a job. She said she hopes Forum participants and other people of faith will, “like the hound of heaven,” urge lawmakers and the administration to move quickly on the agenda.

Wallis, speaking at a Feb. 17 press conference, said the Obama administration has asked for a meeting on the proposals later in the week.

“In my experience in Washington, good, innovative ideas have a power and momentum of their own,” added Gerson. “There’s always a void and vacuum, both on Capital Hill and in the policy process of the White House,” he said, “that can be filled by interesting, innovative policies.”

For more information on the initiatives, visit www.thepovertyforum.org.

(Alice Popovici is an NCR contributor who writes from the Washington area.)