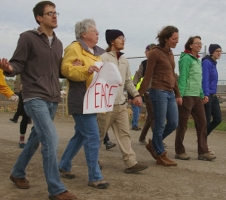 Anti-nuclear weapons activists walk towards the construction site of the new Kansas City Plant. 52 activists were arrested for blocking a gate to the facility May 2. (NCR photo/Joshua J. McElwee)

KANSAS CITY, Mo. -- Hoping to quash a push by activists for a citywide vote on the construction of a major new nuclear weapons facility, the city council here voted yesterday to block placement on a fall ballot of a petition that could halt nuclear work at the site.

The vote is the latest step in a years-long local struggle over what is set to be the nation's first new nuclear weapons plant in 33 years. At heart in the struggle are questions over what control the city can exert over the facility, which, in an unprecedented arrangement, is to be owned by a state agency.

Those backing the initiative say that arrangement means the city has the power to prohibit nuclear weapons production at the facility. They want their measure, which they brought before the city government in May with just under 5,000 signatures, to be placed on a Nov. 8 ballot for voter consideration.

In yesterday's vote, the council approved a resolution declining placement of the measure because it "conflicts with the constitutional power of the federal government to provide for the national defense."

The council voted 12-1. Activists say they will pursue legal action as early as this afternoon to have the decision overturned. Their measure, if passed, would direct the operator of the weapons facility to cease nuclear work in favor of green energy programs.

Tuesday is the last day for certification of initiatives for the Nov. 8 ballot.

Councilmember Ed Ford, who was the lone vote against the measure, said in a phone interview that while the other council members' objections to the constitutionality of the measure are "important," petitioners "have a right to bring their measure to the public."

The new facility, set to replace an existing one here and estimated to cost a total of $1.2 billion, is thought to be the first not to be owned by the federal government. Construction is being subsidized by the city with $815 million in municipal bonds.

The questions surrounding who will have ultimate control over the plant show that the activists' initiative cannot be immediately considered unconstitutional, Ford said, and questions of constitutionality could be addressed in court proceedings following placement of the initiative on the fall ballot.

Over the past few years, Ford has been the lone council vote against approving the arrangement for construction of the new facility several times.

Asked what has caused his continued resistance to the plant, the council member said that while he wished to support measures that would lead to job growth in the city, he couldn't support the production of nuclear weapons.

Ford also cited President Eisenhower's 1961 farewell address warning of a new military-industrial complex to say there may be a lesson for other cities facing weapons program projects.

Said Ford: "I don't even think Ike ever envisioned it would reach down to municipal government -- that the federal government will spend money on defense and do things that they wouldn't do for social programs."

"In other words, we never would have been able to get the federal government to build this green building technology that the petitioners are asking for. It wouldn't have been on their radar."

'We do not want war': the plea of Afghan youth

Pope hosted homeless people at his residence to interview him