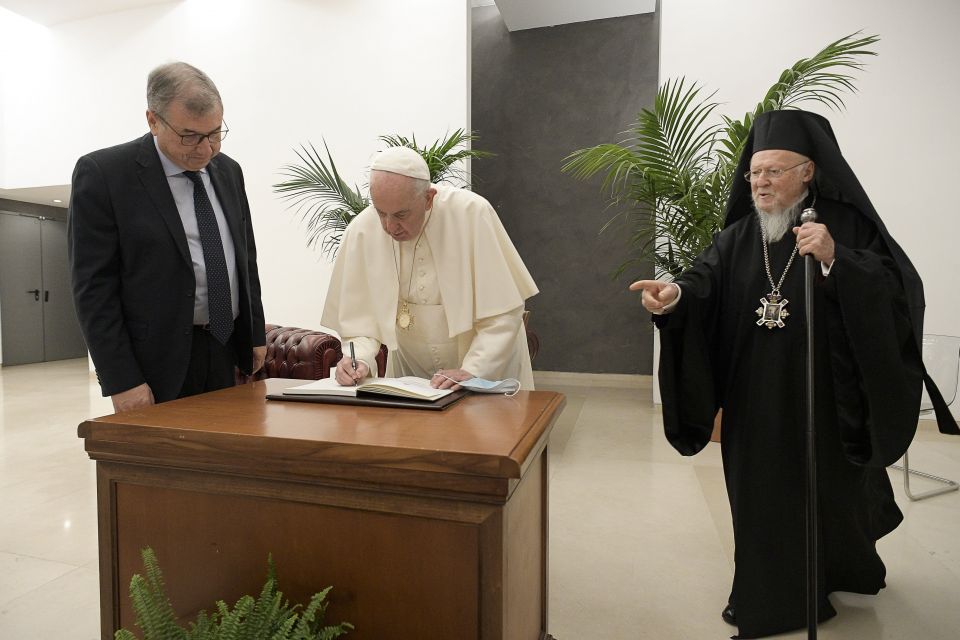 Pope Francis signs documents alongside Vincenzo Buonomo, rector of Rome's Pontifical Lateran University, and Ecumenical Patriarch Bartholomew of Constantinople, at the university Oct. 7, 2021. The event was to launch a new chair supported by UNESCO "On Futures of Education for Sustainability" and a new program of studies in "Care of our common home and safeguarding creation." (CNS photo/Vatican Media)

Rome — The coronavirus pandemic has not only shed light on the issues and societal ills plaguing the world, it also has provided a unique opportunity for humanity to band together for the common good, said Ecumenical Patriarch Bartholomew of Constantinople.

Addressing the opening assembly of the 35th International Meeting for Peace in Rome Oct. 6, the patriarch said that although the world before COVID-19 "is no more," all men and women "have in our hands the possibility to build a new beginning, a new beginning that can only be together."

"Let us begin again by affirming what the pandemic has made more evident: The belonging to one human family of all the peoples of the earth and the attention to caring for creation, which has been able to rest and renew itself, allowing us to rediscover life in many places where it was impossible to imagine it until a few months before," he said.

The Oct. 6-7 gathering was organized by the Rome-based Community of Sant'Egidio. The community has invited religious, political and cultural leaders from around the world to gather for dialogue and to pray for peace each year since St. John Paul II's interreligious prayer for peace in Assisi in 1986.

The meetings include panel discussions and workshops on various themes related to peacemaking, interreligious dialogue and service to the poor.

The two-day event was to conclude with an ecumenical prayer for peace and a closing ceremony at Rome's Colosseum. Among those scheduled to attend were Pope Francis, Patriarch Bartholomew, German Chancellor Angela Merkel and Egyptian Sheikh Ahmad el-Tayeb, the grand imam of Al-Azhar.

Addressing the opening session, Patriarch Bartholomew said the path to peace lies in knowing, listening and understanding others and not by "homogenizing the other to a single global identity."

"It is important to undertake a new path to globalization, to which modern communication systems have introduced us, not to erect barriers, but to save the peculiarities of each people, each territory, each culture," he said.

Mohamed al-Duwaini, deputy of Sheikh el-Tayeb, echoed the patriarch's sentiments and told participants that even though people around the world do not share the same language or country, they do share a "common origin" and duty to "seek the good of the whole world."

He also emphasized the need for collaboration, communication and the sharing of ideas, which would allow humanity "to deal with the consequences and challenges arising from the coronavirus pandemic.

"Civil and constructive communication must move beyond shiny slogans to concrete realities. And it must be translated into an exchange of experiences and goods between nations," al-Duwaini said.

In his address to the assembly, Anglican Archbishop Justin Welby of Canterbury said the pandemic revealed "the places where inequality and injustice have made their home in the darkness of ignorance and selfishness."

However, he added, men and women are offered an opportunity "to seize this moment of great change" and rebuild a world that is "not pushed apart by false promises and idols" but instead protects the vulnerable and the environment.

"This does not mean we have to agree on everything," Archbishop Welby said. "This is why we have politics, to engage well on the issues which define how we live and how we live with each other. But it does mean that where we disagree, we are called to disagree well and love one another across division."

If you can train for war, you can also train for peace