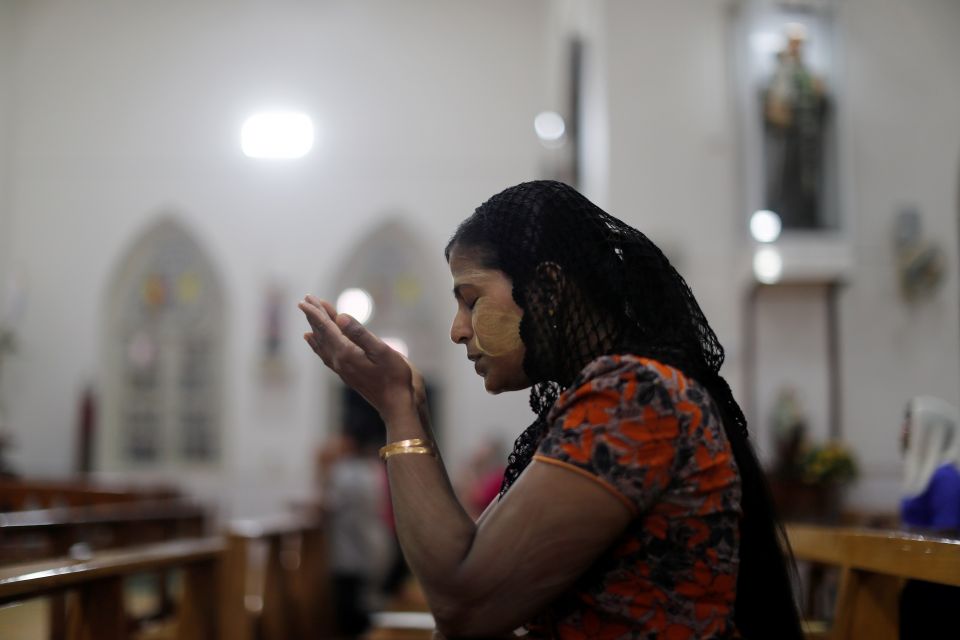 Washington — The Feb. 1 coup by Myanmar's military forces, overthrowing the democratically elected government, has made a bad situation only worse for the nation's religious and ethnic minority groups, panelists said during a Nov. 4 video forum on the situation in the Southeast Asian nation.

Since the coup, "Pope Francis has called for peace, dialogue and a respect of human rights in Myanmar," noted William Canny, director of the U.S. bishops' Migration and Refugee Services. He was a panelist at the forum, "After the 2021 Military Coup in Myanmar/Burma: Impacts on Internally Displaced Persons and Refugees."

"Violence, human rights abuses and political instability (are) only part of the problem," Canny said, as outward migration has been occurring for a long time there. "The COVID pandemic has only exacerbated these issues."

He lauded the efforts of Myanmar Cardinal Charles Bo of Yangon.

"Cardinal Bo and the larger church have engaged in interreligious dialogue. This has been a prominent avenue for promoting reconciliation," Canny said.

Since the Tatmadaw, Myanmar's military forces, seized control of the country, there have been 219,000 new internally displaced persons in Myanmar, coming largely from Chin state and the Sagaing region, said Zo Tum Hmung, head of the Chin Association of Maryland. Another 22,000 have fled to neighboring countries, including 14,000-20,000 in India, Hmung said.

The numbers come from a new report, also named "After the 2021 Military Coup in Myanmar/Burma," produced by the Chin Association of Maryland. About 85% of the country's Chin people profess Christianity, Hung said.

"The United Nations decried it as a 'brute force terror campaign,'" Hmung said. "There's been a devastating humanitarian impact on internally displaced persons and refugees from Burma."

Hmung added he uses Burma, Myanmar's former name, because the military regime changed the name. "They did not have the right to change the country's name. They are not elected by the people at all. So that's why we use Burma."

Because of world attention focused on the country's Rohingya Muslim population, "there's less understanding about the situation of the Chin and some of the other ethnic and religious minorities in Myanmar," said Jana Mason, a senior adviser on U.S. government and external relations for the U.N. High Commissioner for Refugees. "They're facing a very similar situation of violence and human rights challenges in Myanmar."

Forced displacement in Myanmar, Mason said, is "nothing new. It's been going on for decades." All told, "we're looking at about 600,000 internally displaced persons in Myanmar. They would be looked on as refugees if they crossed the border."

That would include "over 200,000 that have been displaced since February, since the coup," Mason added.

"In these past two months, we've seen an uptick in violence in Myanmar," Mason noted. "We know that tens of thousands of refugees have sought safety in India each week. ... New arrivals since the coup have been offset by the return — not all of them voluntary."

Jenny Yang, senior vice president of the global Christian organization World Relief, remembers visiting Chin refugees in India during a 2014 trip with Hmung. She recalled meeting Chin families in the towns' marketplaces, but their children were not in school.

"They would pull the children out of school and have the children sell goods on the streets" because the parents could not afford to send them to school, Yang said.

Another issue: "They could not find land to bury their dead," Yang said. "They were pleading with the local governments to find plots for them to bury their dead." Without nearby burial sites, "they spent hours transporting their bodies" and digging  the grave themselves.

"Local integration is very challenging," Yang said. "India continues to not extend full protection to refugees from Burma. There's an ongoing state of insecurity these individuals face." But by the same token, "safe and voluntary repatriation is not an option right now," Yang said.

"LIRS has resettled almost 7,000 Chin, women and children," she added. "We see time and time again the promise of peace fulfilled" once Chin refugees arrive in the United States, to become, "eventually, our fellow citizens."

She added ethnic Chin should be prioritized for U.S. resettlement.

The panelists are not alone in pointing to the abuses against Myanmar's religious and ethnic minorities.

"The United States is gravely concerned by reports of gross violations of human rights that Burmese security forces have perpetuated in Chin state, including reports that forces have set fire to and destroyed more than 100 residences as well as Christian churches," said an Oct. 31 State Department statement.

"We condemn such brutal actions by the Burmese regime against people, their homes, and places of worship, which lays bare the regime's complete disregard for the lives and welfare of the people of Burma," it added.

"These abhorrent attacks underscore the urgent need for the international community to hold the Burmese military accountable and take action to prevent gross violations and abuses of human rights, including by preventing the transfer of arms to the military."

In a Nov. 2 statement, Christian Solidarity Worldwide's England office called the attacks "part of a continuing offensive on four villages in Falam township by the Tatmadaw, which has bragged about their ability to 'obliterate Chin in two weeks' time.'"

Hundreds of migrants are in limbo on rescue boats in Mediterranean