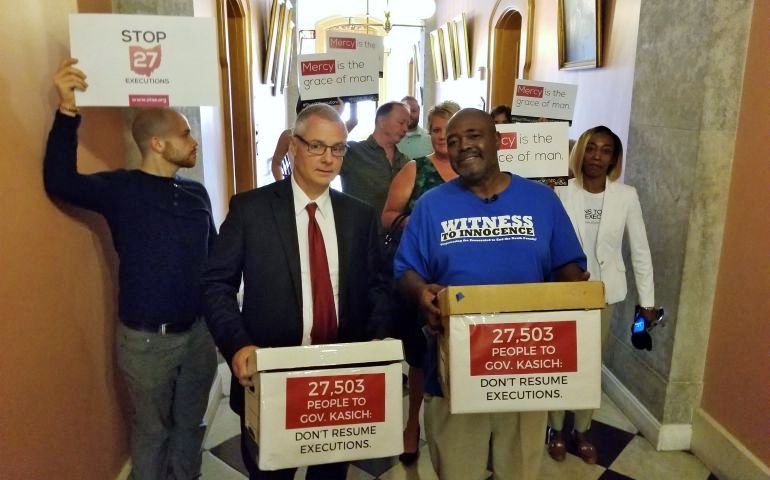 Executions are expected to resume in Ohio July 26 after an Ohio court overturned a preliminary injunction against the state's lethal injection protocol June 28.

The U.S. Court of Appeals for the Sixth Circuit in an 8-to-6 decision ruled against previous court orders that have halted all executions in the state since January. Two courts previously ruled in favor of the three plaintiffs in the case — all death row inmates who argued that the state's lethal injection protocol violates inmates' Eighth Amendment right against cruel and unusual punishment.

After a five-day evidentiary hearing in January, Magistrate Judge Michael Merz from the U.S. District Court for the Southern District of Ohio granted a temporary stay of execution for the plaintiffs. The injunction provided temporary relief for the plaintiffs until the case was either overturned or another drug protocol was found.

The state appealed the ruling, and April 6 a three-judge panel from U.S. Court of Appeals for the Sixth Circuit again ruled 2-1 in favor of the plaintiffs.

Allen Bohnert, one of the attorneys representing the death row prisoners in the case, released a statement following the ruling.

"Ohio should not take the risk of continued botched executions by going back to using these dangerous, unsuitable drugs," Bohnert said. "This is especially true because Ohio still has open avenues where it may be able to obtain reliable execution drugs."

In the court's June 28 opinion, the judges write that "the State's chosen procedure here is the same procedure (so far as the combination of drugs is concerned) that the [U.S.] Supreme Court upheld in Glossip," and thus has already been found not to violate the plaintiff's constitutional rights.

However, experts argue that the Ohio courts have benefited from the evidentiary hearing held in January that presented additional history and facts surrounding the usage of midazolam, information that was not available to the U.S. Supreme Court at the time of their 2014 decision.

Robert Dunham, executive director of the Death Penalty Information Center, told NCR in April that the January ruling and April 6 decision was based on the "fullest evidentiary hearing" on midazolam, the controversial first drug used in the state's lethal injection three-drug protocol.

"There's nothing that the Ohio court did that is inconsistent with the United States Supreme Court precedent; there's no legal judgment it made inconsistent with what other courts have done, it's just the judgment was based on different findings of fact," Dunham said.

The drug's effectiveness has been called into question following the problematic executions of Christopher Brooks and Ronald Smith in Alabama, Paul Howell in Florida, Joseph Wood in Arizona, Clayton Lockett in Oklahoma, Ricky Gray in Virginia, and in the Ohio execution of Dennis McGuire.

McGuire's execution became a crucial part of the plaintiff's argument against the state's drug protocol. McGuire, who was executed Jan. 16, 2014, was the first in Ohio to be executed using midazolam.

During the evidentiary hearing, Ohio Department of Rehabilitation and Correction Director Gary Mohr testified about McGuire's execution. Mohr — who has overseen 11 executions — witnessed "phenomena [not seen] before and was concerned," according to court documents.

"I saw the stomach first. I saw what looked like a knot in his stomach ... and his stomach was moving. I had not seen that before," Mohr said. "And then I saw his mouth open, and I heard audible sounds. I don't know whether it was like a snore or a snort."

Alan Johnson, a reporter for The Columbus Dispatch also testified during the hearing. Johnson, who has witnessed 20 executions in Ohio, testified that McGuire's reaction was unique.

"After the end of five minutes, roughly, inmate McGuire began coughing, gasping, choking in a way that I had not seen before at any execution," Johnson testified. "And I remember it because I relived it several times. Frankly, that went on for 12 to 13 minutes."

Johnson said that none of the other 19 executions he had witnessed matched "th[e] intensity or th[e] duration" of McGuire's.

McGuire's execution was the last to occur in Ohio, however that may change this week. Ronald Phillips, one of the plaintiffs in the case, is scheduled to be executed July 26.

On July 19 a press conference was held at the statehouse to ask Ohio Gov. John Kasich to oppose the execution of Phillips and the 26 other executions Kasich scheduled through March 2021.

Those speaking on behalf of the death row inmates represented a wide range of both officials and citizens.

Nearly 200 faith officials signed a letter addressed to Kasich. In the letter the signatories cite that their faiths "demand fairness, accuracy, and mercy at a threshold far higher than the law currently prescribes." The letter expressed concern that recommendations presented by the Ohio Supreme Court Joint Task Force on the Administration of Ohio's Death Penalty have yet to be undertaken since the final report was released in April 2014.

"Therefore, as people of faith, we affirm our support for implementation of reforms recommended by the Ohio Supreme Court Joint Task Force on the Administration of Ohio's Death Penalty before any execution takes place," states the letter.

Five Ohio death row exonerees also addressed Kasich. Together they launched an online petition, which nearly 100,000 people have signed according to a press release from Ohioans to Stop Executions. Those petitions were delivered to Kasich's office June 24.

"We are some of the nine men exonerated from Ohio's death row, proving that innocent people have been sentenced to death in our state," the exonerees wrote. "We cannot restart executions until there are better safeguards in place to ensure that Ohio never executes an innocent person, which would be unthinkable."

In addition to the support from some of the Ohio community, lawyers filed a last minute application for a stay of execution with the U.S. Supreme Court on July 18. The stay of execution would cover Phillips and the two other inmates represented in the drug protocol case.

Attorneys are arguing that the full U.S. Court of Appeals for the Sixth Circuit "used the wrong standard of review in overturning the federal district court's preliminary injunction against Ohio's controversial lethal injection protocol."

"Of the 15 federal judges who have reviewed this case so far, 8 would allow the executions to proceed next week, while 7 would allow a trial on whether their use is cruel and unusual. No circumstances call out more for additional review than these — where courts are so closely divided on such a consequential, irrevocable issue," stated Mark Haddad, of Sidley Austin, LLP, in a press release from Ohioans to Stop Executions. Haddad is one of the attorneys representing the death row prisoners who brought the lethal injection lawsuit.

Lawyers also filed a Petition for a Writ of Certiorari with the U.S. Supreme Court to review the lower court's decision based on "representations by Ohio officials to the courts, the plaintiffs, and the public that it would never again use a three-drug execution method that involves a paralytic and potassium chloride."