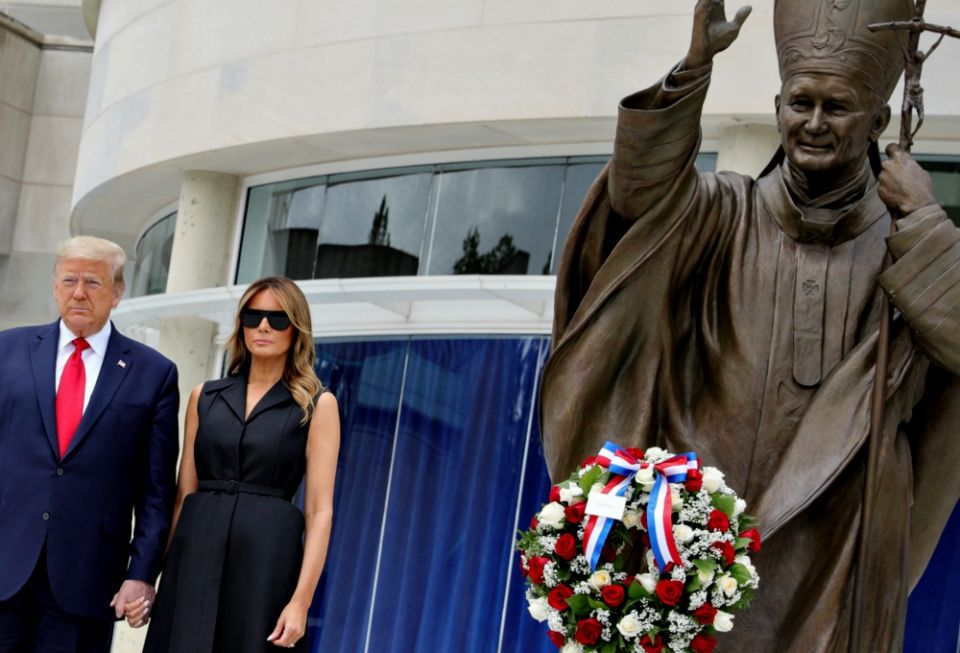 In response to President Donald Trump's June 2 visit to the St. John Paul II National Shrine in Washington, D.C., hundreds of Knights of Columbus members have signed a petition urging Baltimore Archbishop William Lori to apologize for the "hurtful violation" and also asked the leadership of the Knights to acknowledge their "long history of complicity with prejudice and institutional racism."

The Knights of Columbus fraternal order owns the St. John Paul II Shrine, and Lori is the Knights' supreme chaplain.

Trump's visit came a day after federal law enforcement officers fired tear gas to disperse a protesting Black Lives Matter crowd outside the White House, which was soon followed by a photo op of Trump holding a Bible outside the nearby St. John's Episcopal Church.

The petition said that Lori has allowed the Knights "to be co-opted in the service of self-aggrandizement and injustice. We call on you, as the Supreme Chaplain of the Knights of Columbus, to acknowledge the deep hurt your organization has caused," it said.

Petitioners called on the organization to acknowledge its racist past when it "did not admit African Americans during the era of Jim Crow." They also pointed out that "no person of color currently serves as a Supreme Officer of the organization."

Petitioners have asked the council to "commit to engaging in an internal process of healing and reconciliation with its racist legacy."

Although the first African American member joined the Knights of Columbus in the 1890s, members were known to follow the method of "blackballing" — where any single member could oppose or end a candidacy. In many places, this was done to prevent black members from being accepted. This led to the birth of the predominantly African American Knights of Peter Claver in Alabama on Nov. 7, 1909.

The Knights of Columbus amended their admission and voting rules in 1964, and then again in 1972.

The recent petition was spearheaded by Wesley Cocozello and Alexandra Carroll, two Catholic advocates from Washington who were present at the demonstration outside the shrine during Trump's visit there, joining others in protest.

"As people of faith we wanted to write to Archbishop Lori and express our sense of betrayal. We sent out the petition to folks we know, and soon it spread among other Catholics and members of the Knights. Their grievances are more personal than ours," said Cocozello.

The events from June 2 have prompted many lifelong Knights to examine their ties to a group they say has become politically partisan.

Martin Kearney from Harrisburg, Pennsylvania, resigned his membership in protest of the Trump visit. Kearney said he had no idea the shrine was owned by the Knights of Columbus until he read about it.

"What Trump did with protesters the day before the visit struck me as authoritarian. When I found out he was visiting the shrine, I thought it was reprehensible. I emailed the Grand Knight of my parish the next day and said I can't be a part of an organization that turns a blind eye to racism," said Kearney.

Kurt Krouse, from Lexington, Kentucky, watched the events unfold with disappointment and bewilderment.

"I'm a cradle Catholic. I've got no problem with anyone wanting to come and worship, or to learn what it is to be Catholic. But to use the shrine as a photo-op to rile up your base is just abhorrent," said Krouse, who wrote to the Supreme Council of the Knights expressing his disappointment.

"If I don't hear from them, I will no longer be a member. If the organization doesn't listen to its members and their diverse viewpoints, there's no reason to be part of it. I can do my charity work in other ways," said Krouse, a member of the Knights of Columbus Council 762.

The Knights of Columbus leadership has been politically active for decades. They fund conservative political organizations and are known to demonstrate considerable clout within political circles.

"For the Knights of Columbus to make things political makes me cringe," said Tim Kasun, a member from Omaha, Nebraska.

Anthony Bigesby, the grand knight of St. Augustine Council 15723 in Washington, has welcomed the support from other members and fellow Catholics. "It makes me feel grateful. People are talking about the issue of the day, which is racism. It's not something to be joyful about. But the whole idea is to try and fix the problem. And that's what the protest [Black Lives Matter] is all about," he said.

Bigesby said that Fr. Pat Smith, the St. Augustine pastor, has written to Lori and the Grand Council of the Knights and is awaiting a response. "They have not reached out to us yet. We will follow the lead of our pastor and Archbishop Gregory."

The Knights of Columbus headquarters in New Haven, Connecticut, defended its position. Joseph Cullen, the Knights' spokesperson, said the order does not endorse any political candidate. Instead, he said, the Knights work with all leaders to fight for social justice and religious freedom.

In a statement to NCR, Cullen said the shrine was a "favorable venue" for the president to plan to sign an executive order on religious liberty.

"Unfortunately, due to the protests and demonstrations going on in Washington, the signing at the shrine was canceled on the eve of the ceremony and moved to the White House," said Cullen.

Responding to the criticism from members and fellow Catholics, Cullen said, "To promote a spirit of peaceful reconciliation in the face of today's unrest, we have invited all to join in a novena of prayer for unity and an end to racism, and we will continue to contribute to the good and necessary work that is needed now more than ever."

[Sarah Salvadore is an NCR Bertelsen editorial intern. Her email address is ssalvadore@ncronline.org.]

Read this next: I'm done with the Knights of Columbus

Black in America: I am tired