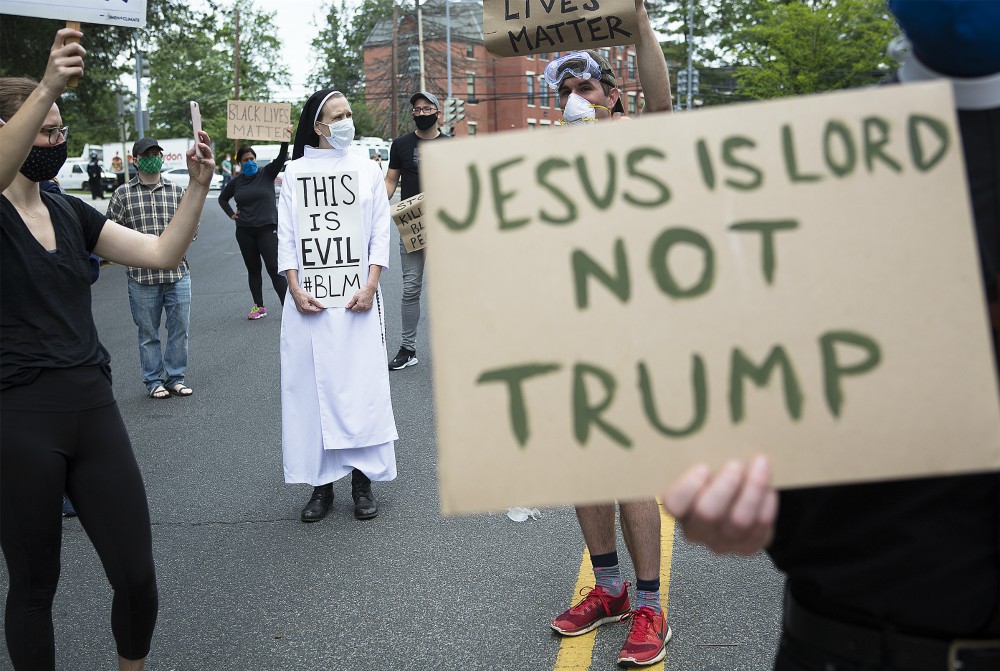 Trump's visit came a day after his controversial appearance in front of St. John's Episcopal Church, across from the White House, where he posed for photos holding up a Bible. Federal authorities used rubber bullets and smoke cannisters to disperse peaceful protesters in front of the White House before Trump, accompanied by aides, walked to St. John's.

Earlier on June 2, Washington Archbishop Wilton Gregory issued a statement criticizing the use of the shrine for Trump's visit. The John Paul II Center is operated by the Knights of Columbus.

"I find it baffling and reprehensible that any Catholic facility would allow itself to be so egregiously misused and manipulated in a fashion that violates our religious principles, which call us to defend the rights of all people even those with whom we might disagree," Gregory said.

The archbishop also highlighted the use of force against protesters on June 1, saying St. John Paul II would not "condone the use of tear gas and other deterrents to silence, scatter or intimidate them for a photo opportunity in front of a place of worship and peace."

Stephen Schneck, executive director of the Franciscan Action Network, told NCR over the phone, "It's absolutely inappropriate for the president of the United States to be using a Catholic facility like the shrine for a photo op for his reelection. We have to insist that the Catholic Church in the United States maintain its distance from a person who represents nothing that our church represents."

Trump was accompanied by First Lady Melania Trump. They arrived at the shrine around 11:30 a.m., according to a White House pool report.

Around 2,000 people were demonstrating in front of the shrine, said Schneck.

Franciscan Sr. Marie Lucey told NCR she was "distressed" by the visit. "St. John Paul II said racism is a sin. And we believe the president is promoting racist policies. We are here to say 'Black Lives Matter'; we are here to say unless things change, we are going to be destroyed as a country."

"As Catholics, we needed to make sure our voices were heard, that we are not in agreement with his policies and that the black lives matter to the Catholic community," said Maggie Conley, a member of the justice team of the Sisters of Mercy of the Americas.

Susan Gunn, director of the Maryknoll Office for Global Concerns, said she was representing all the religious in her organization and that first and foremost on their minds was the death of George Floyd. Floyd, a 46-year-old black man from Minneapolis, was killed on May 25 after an arresting officer pressed his knee into Floyd's neck for eight minutes and 46 seconds. His death has sparked protests across the country.

"We are here to say his name, and Breonna Taylor and Ahmaud Arbery*. Our Christian faith calls us to recognize the tremendous suffering of our brothers and sisters. I believe it's absolutely shameful that the Knights of Columbus is hosting the president at this time at the St. John Paul II National Shrine, our great pope, a man of peace," she said.

Trump's visit to the shrine coincides with the anniversary of St. John Paul II's visit to Poland in 1979. The president's visit was planned before the current protests erupted after Floyd's death.

"President Trump is now using the Catholic faith in another photo op to defend his appalling refusal to address racism and police violence in the United States. He is trying to create a false dichotomy of peaceful protesters versus the Church. That could not be further from the truth, and any Christian who believes it does not understand Jesus's message," Campbell said in a statement.

The demonstration was called last night by members of various Catholic organizations, including Pax Christi International, Maryknoll and the DC Catholic Coalition.

Demonstrators said they came prepared in case the police fired tear gas and flash grenades. "My wife wrote down her daughter's telephone number on her arm. But so far, the police have been polite," said Schneck.

They praised Gregory's statement and hoped that more bishops would speak up. "This is a moment of leadership and clarity. It's time for the bishops to recognize the Gospel and the values it articulates in personal life," said Judy Coode, project coordinator of the Catholic Nonviolence Initiative of Pax Christi International.

*This story has been edited to correct the spelling of Arbery's name.