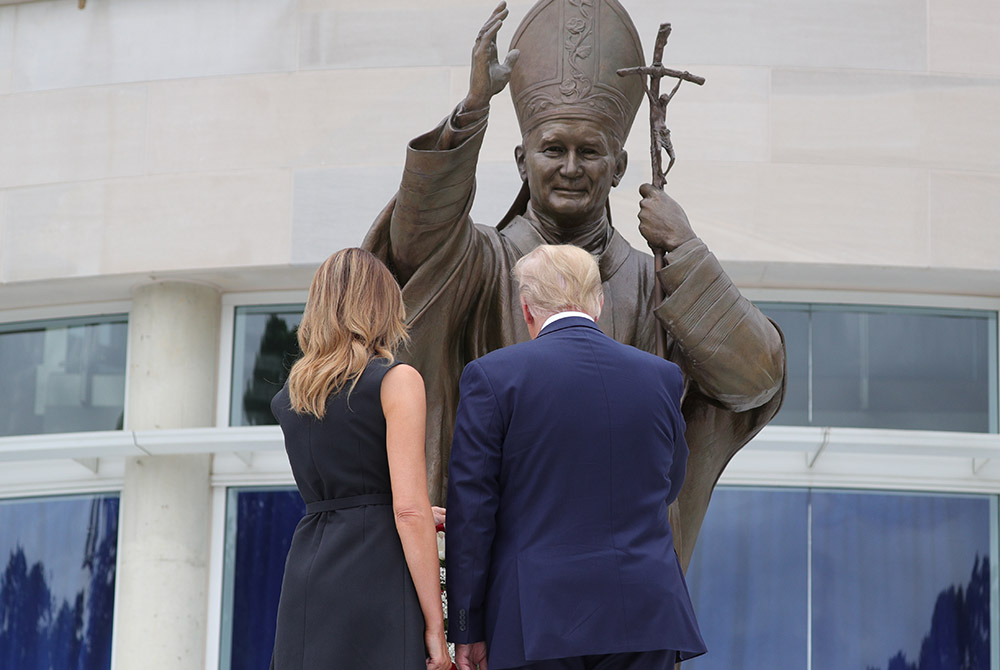 U.S. President Donald Trump and first lady Melania Trump look at a statue of the pope during a visit to the St. John Paul II National Shrine June 2 in Washington, the 41st anniversary of beginning of the pontiff's 1979 historic visit to Poland. (CNS/Reuters/Tom Brenner)

I'm done with the Knights of Columbus.

Because the top brass of the Knights of Columbus (known as the Supreme Council) injected the Knights into a partisan campaign at a moment of crisis in our national life. They politicized the order and took the side of racial bigotry and the violation of the constitutional and human rights of American citizens. They invited President Donald Trump to use the St. John Paul II National Shrine in Washington, D.C., as a prop for a photo for his political campaign. They did it at a moment of national crisis, the day after he had used St. John's Episcopal Church in Washington, D.C., as a prop.

The context of this Knights of Columbus photo op cannot be ignored. On June 1, Trump, through attorney general William Barr used violence to clear away peaceful protestors along streets near Lafayette Square in Washington so he could walk across the square and hold a Bible aloft like some sort of alien object.

He took both photos without the consent of either the Episcopal or Catholic bishops. He did this over the strenuous objections of Washington Archbishop Wilton Gregory. In a strongly worded statement released the morning of Trump's visit, Gregory said:

I find it baffling and reprehensible that any Catholic facility would allow itself to be so egregiously misused and manipulated in a fashion that violates our religious principles, which call us to defend the rights of all people even those with whom we might disagree. Saint Pope John Paul II was an ardent defender of the rights and dignity of human beings. His legacy bears vivid witness to that truth. He certainly would not condone the use of tear gas and other deterrents to silence, scatter or intimidate them for a photo opportunity in front of a place of worship and peace.

Now the archbishop is under attack from right-wing Catholic groups, like LifeSiteNews and Church Militant. He should consider their attacks a badge of honor. These people frequently and viciously attack Pope Francis as well.

Trump is a combative and angry man. He used federal officers to take away the rights of American citizens, to incite police violence. He has threatened to release vicious dogs and awesome weapons on demonstrators and to shoot looters. He does not seek to calm but to enflame. He does not seek to unite, but to divide. And at a crucial moment, the Knights of Columbus top brass came to his aid with a photo opportunity.

Why? It is inexplicable unless they had decided at a crucial moment to endorse Trump. 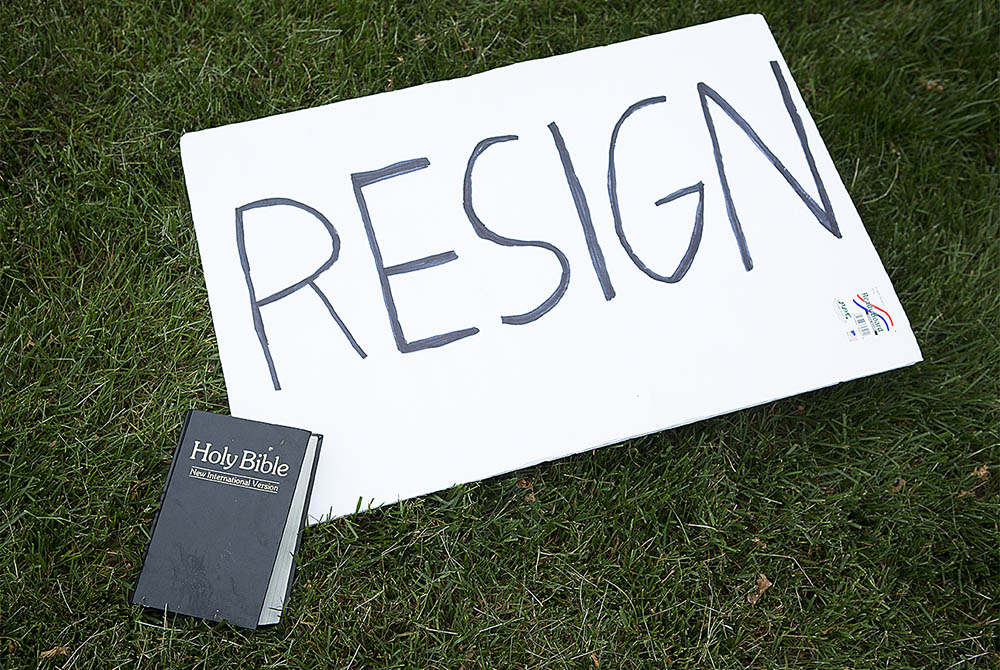 A Bible and placard are seen near the Capuchin College June 2 in Washington. President Donald Trump and first lady Melania Trump visited the nearby St. John Paul II National Shrine for the 41st anniversary of the beginning of St. John Paul's historic nine-day visit to Poland in 1979 during which he called for religious and political freedom in that country. (CNS/Tyler Orsburn)

At the shrine, Trump made no speech, signed no document, met no dignitaries or delegation and attended no prayer service. While he toured the building briefly, he did nothing except bring a wreath to the statue of John Paul II. He stood there for an awkwardly long time and appeared to have to instruct the first lady to smile.

The existence of the St. Pope John Paul II Shrine is itself a scandal. It was built by the Archdiocese of Detroit at a time when archdiocese was closing many schools and parishes for lack of funds. It cost $75 million.

But it is a dramatic setting for a Catholic type campaign photo.

Who could have approved this visit? Surely a presidential visit would be approved at the top echelons of the Knights, including Supreme Knight Carl Anderson and supreme chaplain Baltimore Archbishop William Lori. By allowing the visit, the Supreme Council disrespected our local bishop and church and showed that they had a tin ear to the controversy over racism. It was a stick in the eye to the local church which is heavily African American.

Because Trump countenances and encourages racism. I don't have space here to recount all the evidence from the last three years, including the campaign, Charlottesville, his statements about immigrants and refugees and his remarks about athletes "taking a knee" before football games to protest racism, calling any player who "disrespects our flag" a "son of a bitch" who should be fired. As former Secretary of Defense James Mattis said, he is the first American president who seeks to divide Americans, not unite them.

Racism is a sin. It has been condemned by the last three popes, and by the U.S. Conference of Catholic Bishops. The Supreme Council knew this visit would amount to political support for Trump in a national controversy over racism.

Anderson is not a politically naive man. He has been a political operative in Washington for many years. He was a legislative assistant to Sen. Jesse Helms of North Carolina, from 1976-1981. Helms was well known as a segregationist and who opposed the effort to establish a national holiday honoring the Rev. Martin Luther King Jr. Anderson went on to work at the Reagan White House and then was appointed by George H.W. Bush to the U.S. Civil Rights Commission, where he gained a reputation for slow walking civil rights enforcement. Anderson knew what he was doing in this controversy. 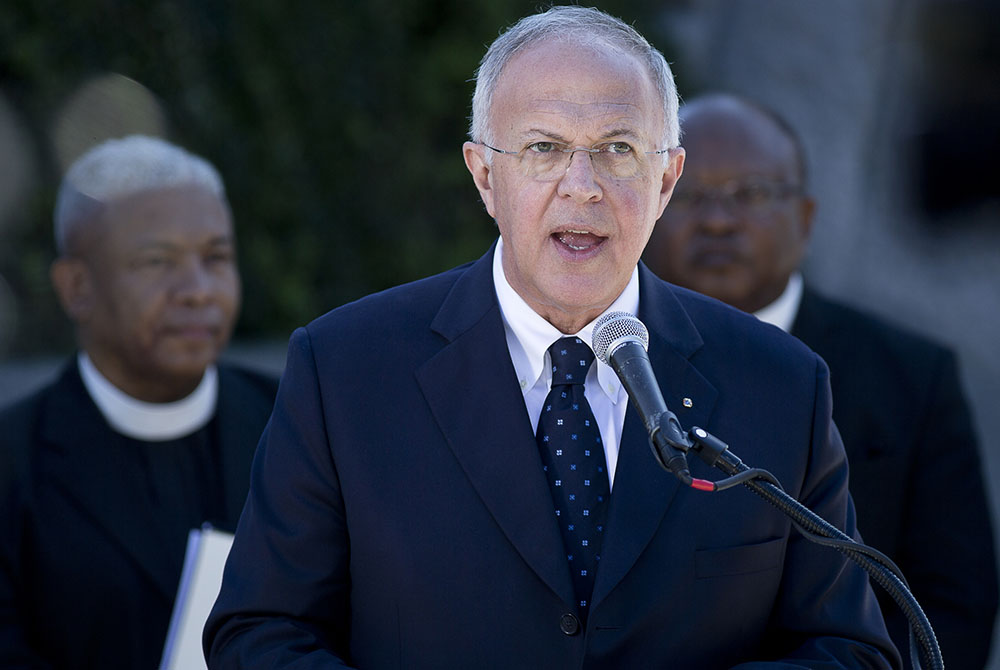 Supreme Knight Carl Anderson, CEO of the Knights of Columbus, is seen in Washington in this 2017 file photo. (CNS/Tyler Orsburn)

In my opinion, the Knights of Columbus is no longer the small mutual aid society and fraternity founded by Fr. Michael McGivney in the 19th century. It is now a big, rich corporation that seeks to be a political player in the American scene. Its nearly 2 million members, the vast majority of whom never go to a meeting, give it clout. It is principally an insurance company, which underwrites $105 billion in policies, has $22 billion in assets. Money and membership that give it power.

The Supreme Council are extremely well paid. Anderson was paid more than $2 million in 2014. His annual base salary is around $900,000, according to press reports and tax filings. All of the other top brass is paid in the hundreds of thousands per year.

I will not be dragged into the political campaign on the side of Trump, whom I consider a racist who violates the U.S. Constitution and his oath of office by taking away the constitutional rights of American citizens.

Therefore, I resign. Not only do I resign, I encourage others to resign from the Knights of Columbus. I stand with my archbishop in this controversy. He was right.

I have met many wonderful men in the Knights, some of them African American. Some of them are among my best friends whom I admire deeply. While I regret this decision, it is a matter of conscience. They have injected themselves into politics at a time of national crisis. They have politicized the order and the church. This is unacceptable.

Read this next: Decrying Trump shrine visit, petition calls on Knights to address racist past

A version of this story appeared in the July 10-23, 2020 print issue under the headline: I'm done with the Knights of Columbus.