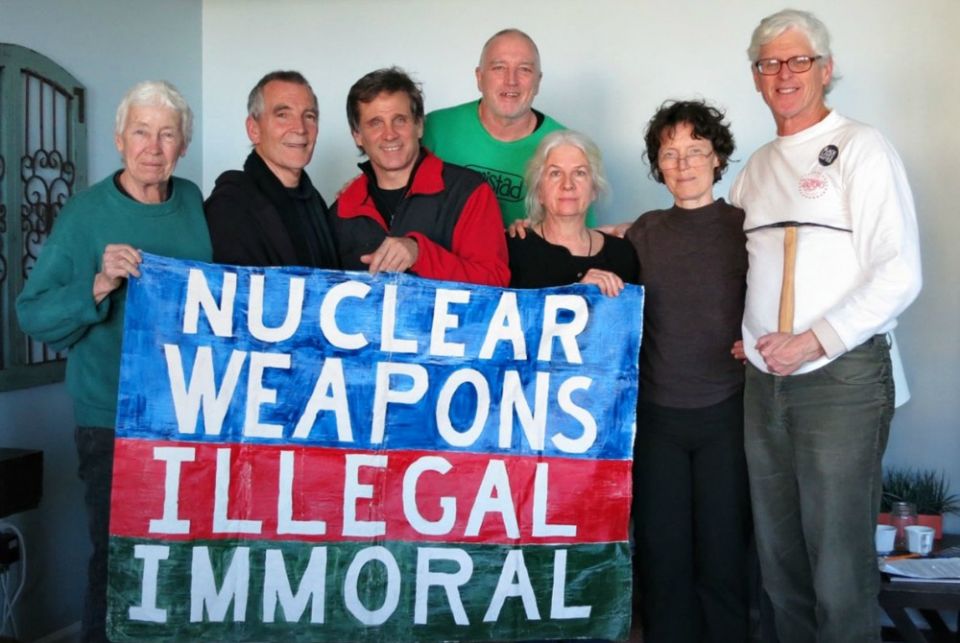 Let's say the house across the street is on fire. You hear someone trapped inside, calling for help. The only way in to save that individual is to kick down the door, go inside, and pull them out.

"Necessity," under the law, means that should you kick down the door, you could argue you should not be charged with breaking and entering because force was required to prevent a greater evil. It was necessary, in this situation, to enter someone else's property without permission. It wasn't trespassing, wasn't a crime. It was a rescue operation.

Patrick O'Neill says that "necessity" is what drove him and six other Catholics to break into a naval submarine base in Kings Bay, Georgia, the night of April 4, 2018, and vandalize the military complex to protest the existence nuclear weapons.

The Catholic peace activists who refer to themselves as the "Kings Bay Plowshares 7" believe the prospect of nuclear war and the potential for annihilating humanity is only "a hair trigger away." O'Neill said that such conditions necessitated a dramatic, high-profile action to call attention to the dangers of nuclear weapons or, what he calls, "this evil." 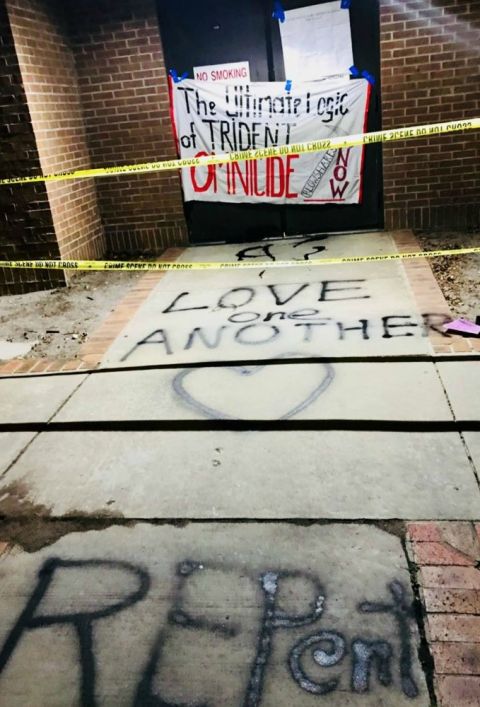 It's like when Jesus cleansed the temple by throwing the tables of the moneychangers, O'Neill explained. Theatrics were necessary.

So that's what they did.

On the 50th anniversary of the assassination of the Rev. Martin Luther King Jr., the seven activists cut a lock, entered the base, and then split into three groups. Two activists poured blood on an outdoor replica of a nuclear missile and, using hammers made of melted-down guns, attempted to topple the large statue. Two others put up an anti-war banner and police tape outside of the base's administrative building. The remaining three headed for the bunkers where nuclear warheads are stored but, according to Religion News Service, were caught before they reached the missiles.

"It was simply a religiously motivated, sacramental action," said Martha Hennessy, one of the seven and a retired occupational therapist.

"We would argue that if a bunch of people in the early '40s broke into concentration camps in Nazi Germany and destroyed them, that would not be unlawful. The concentration camps incinerated people and they needed to be destroyed," O'Neill, a North Carolina-based journalist and founder of the Fr. Charles Mulholland Catholic Worker House, told NCR. "So we argue that instead of bringing people to the incinerators, nuclear weapons are the incinerators."

This line of reasoning is part of the seven's overall strategy for explaining their action but, according to O'Neill, "the government doesn't want us to say what our motivation is" when the case goes to trial because it could potentially affect a juror's decision to convict. 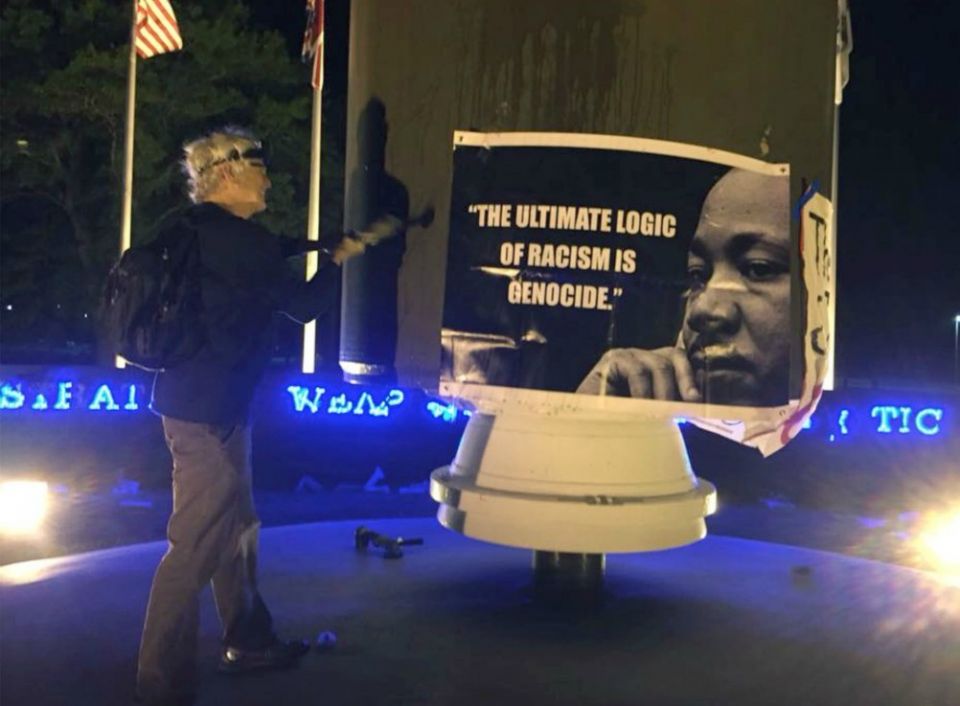 Patrick O’Neill attempts to deface a nuclear monument with a hammer at the Kings Bay Naval Submarine Base in April 2018. (RNS/Courtesy of the Kings Bay Plowshares 7)

For this reason, the activists will appear in federal court for a pretrial hearing in August in Brunswick, Georgia. The seven will argue for a second time why their case falls under the Religious Freedom Restoration Act, which could allow them to include their religious motivation as part of their defense or, possibly, even have the charges against them dismissed.

"We want to get motivation into the court of law," O'Neill said. "Speak truth to power."

The seven activists will present oral arguments to federal Judge Lisa Wood, who will eventually oversee their trial. They are appealing an April 26 decision by a federal magistrate judge that denied their motion to dismiss all charges under the Religious Freedom Restoration Act.

Catholic News Service reported April 29 that although the magistrate judge found the activists to be sincerely motivated by their religious beliefs, the defendants failed to show that the government violated their rights under the law.

According to the Kings Bay Plowshares 7 website, the magistrate judge concluded that the 20-year prison sentence the seven face is the federal government's "least coercive response" to their actions.

"We disagree with the idea that it's appropriate that the least restrictive means for the government to address people's religious belief is by exposing them to 20-plus years in prison. That's going to be one of the key challenges we bring [in the appeal]," Bill Quigley, a law professor at Loyola University New Orleans who is pro bono legal consultant for the seven, told CNS in April.

The seven have received support from a number of prominent peace activists, including South African Archbishop Desmond Tutu and Bishop Thomas Gumbleton, through the form of a "global petition" addressed to Attorney General William Barr. The petition writes, in part, "We who share the moral vision of the Kings Bay Plowshares 7 proclaim our support for their courage and sustained sacrifice and call for the immediate dismissal of all charges against them." 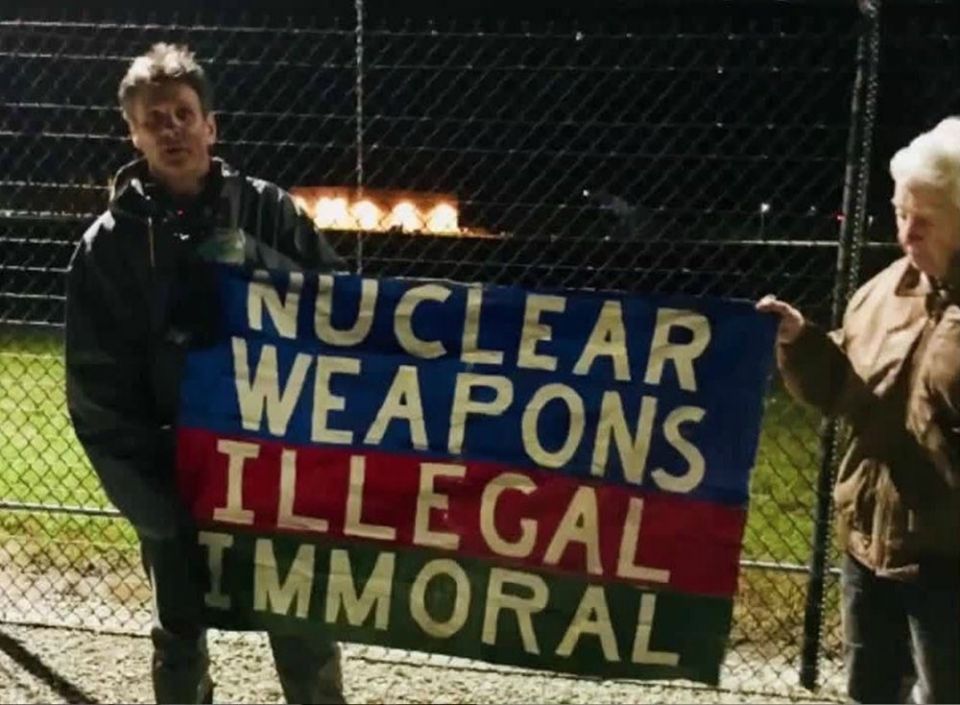 Three of the seven defendants — including 70-year-old Jesuit Fr. Steve Kelly and 79-year-old Elizabeth McAlister — have remained in the Glynn County Detention Center in Brunswick, Georgia, over the course of this legal battle, which has lasted 15 months now and still does not have a trial date. That date will be set sometime after Wood rules on the seven's appeal over the Religious Freedom Restoration Act.

O'Neill said the three decided to stay in jail rather than agree to the conditions of paying $50,000 in bail and wearing an ankle monitor.

"This was never anything that we anticipated," O'Neill said of the lengthy court proceedings. "The seven of us have not been able to meet together and adequately prepare for trial. We haven't even seen our co-defendants [still in jail] since last November." 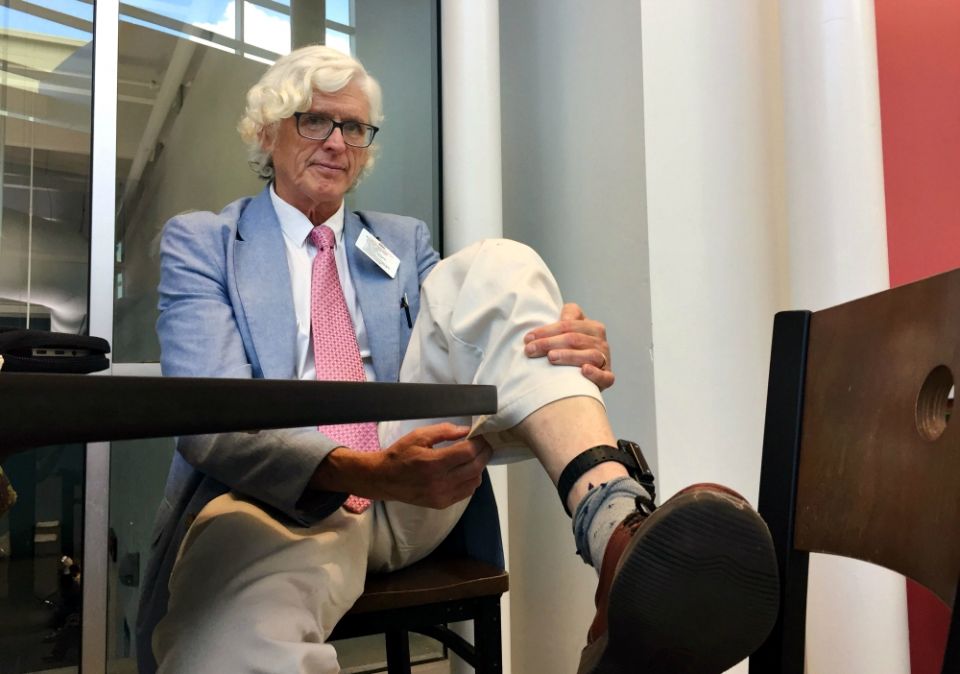 Patrick O’Neill, one of the Plowshares 7, shows his ankle monitor. (RNS/Yonat Shimron)

Plowshares activists have never received maximum sentences, according to Religion News Service. Nevertheless, as RNS reported, the seven activists all have previous experience being jailed for civil disobedience and were aware they faced yearslong prison sentences heading into their 2018 break-in.

"I'll be relieved if I get one year," Carmen Trotta, one of the seven and a member of the St. Joseph Catholic Worker House in New York, told Religion News Service. "Two years is a lot harder. Three years is hard to imagine. Five years is unimaginable. But it's quite possible."

The 2018 action and ongoing legal struggle is the latest episode in a decadeslong history of the Catholic Plowshares movement of protesting war and nuclear weapons. The movement was inspired and took its name from Isaiah 2:4, which says militaries throughout the world "shall beat their swords into plowshares."

Direct actions began in 1980 when Jesuit Fr. Daniel Berrigan and his brother Philip, along with six other activists, broke into a General Electric plant in King of Prussia, Pennsylvania, and hammered and poured blood on weapons there.

McAlister is the widow of Philip Berrigan, who was also known for countless acts of civil disobedience in resistance to the Vietnam War and U.S. militarism in general.

Others involved in the Kings Bay action include Mark Colville, a founding member of the Amistad Catholic Worker community in New Haven, Connecticut, and Clare Grady, a longtime activist whose first Plowshares action was in 1983.

Since its inception, the Plowshares have remained active, with different groups of activists intermittently breaking into nuclear weapons facilities and symbolically hammering nuclear warheads in protest. In all, there have been about 100 actions carried out, according to Religion News Service.

The Kings Bay Plowshares 7 hope their efforts can draw attention to the grave threat they believe nuclear weapons continue to pose, a threat they see as far too overlooked by the general public. 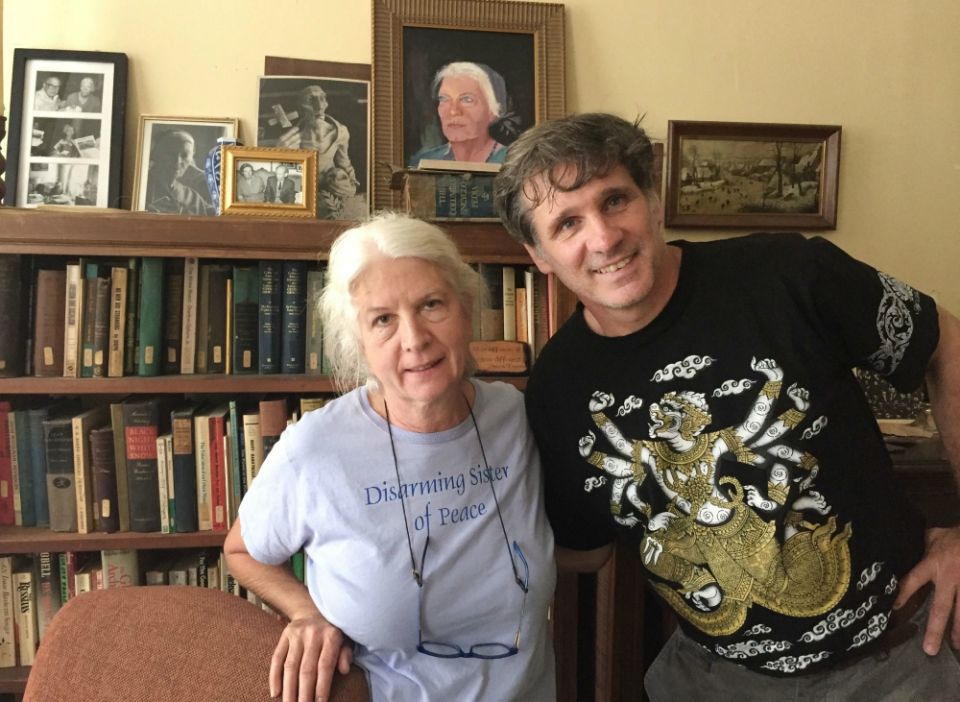 Martha Hennessy, left, and Carmen Trotta are two of the Kings Bay Plowshares 7. Hennessy is the granddaughter of Dorothy Day, whose likeness appears in the painting on the bookcase. (RNS/Yonat Shimron)

Hennessy traced her concern with nuclear weapons back to her childhood when her grandmother, Dorothy Day, handed her a copy of John Hersey's Hiroshima. Now, as a mother and grandmother herself, she ultimately hopes the Kings Bay action sparks a dialogue about the legality of nuclear weapons' very existence.

"We can at least have a discussion about the nuclear blackmailing of the last 70 years. Most Americans aren't even aware we are on a hair-trigger alert," the activist said. "To me the outcome is to force our supposed 'stellar' judicial system, under a 'stellar' democracy, to look at this question of legality."