Editorial: It's time to end the perpetual war 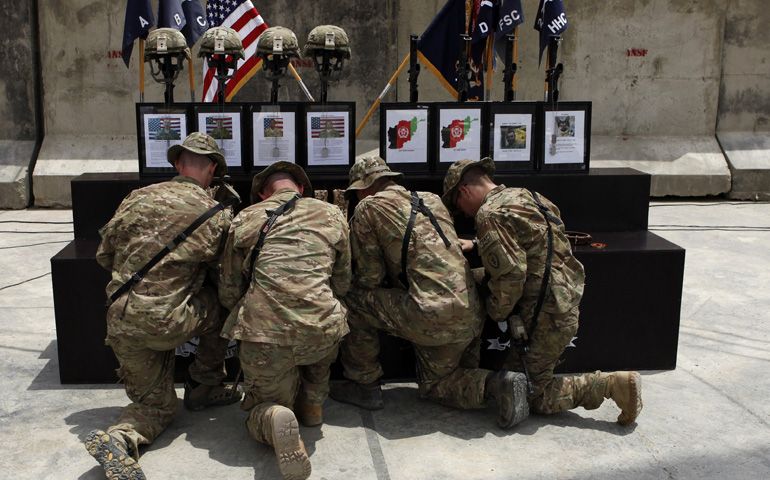 U.S. Army soldiers kneel during a memorial service in Forward Firebase Joyce in Kunar province, Afghanistan, in 2011. Four U.S. Army soldiers, two Afghan soldiers, an Afghan linguist and a military sniffer dog died during operations in Kunar district in the last week of June of that year. (CNS/Reuters/Baz Ratner)

President Barack Obama announced May 27 that 13 years of American combat engagement in Afghanistan will end by December this year. It is also time to put an end to the congressional resolution that not only authorized the war in Afghanistan, but has kept this nation on a perpetual war-footing since September 2001.

The Authorization for Use of Military Force Against Terrorists, or AUMF, is a joint resolution that Congress passed and President George W. Bush signed into law while the nation was still in shock from the Sept. 11, 2001, terrorist attacks on New York and Washington. Sixty words of the resolution have defined our foreign policy and shaped our domestic policy for 13 years.

The law gives the president the authority to "use all necessary and appropriate force against those nations, organizations, or persons he determines planned, authorized, committed, or aided the terrorist attacks that occurred on September 11, 2001, or harbored such organizations or persons, in order to prevent any future acts of international terrorism against the United States by such nations, organizations or persons." It gives no ending date to this authority nor does it signal what action or event would trigger an end to the authority.

With AUMF, Congress abdicated its oversight authority and made an emperor of the president. By effectively sanctioning endless war, and couching it in the noble guise of combating terrorism, the resolution stifled political discussions that could have brought sanity to more than a decade of violence that has left the world not all that much safer.

The legacy of AUMF is more than a decade of squandered lives and resources. According to icasualties.org and the Watson Institute for International Studies at Brown University, more than 4,800 U.S. and coalition forces were killed in Iraq and more than 3,400 have been killed in Afghanistan since 2001. More than 10,000 Iraqi soldiers and 134,000 Iraqi civilians have been killed by roadside bombs, in crossfire and as "collateral damage." Millions of Iraqis have been displaced. At least 18,000 Afghan civilians have died violent deaths as a result of the war, countless more will have had their lives shortened because the war has exacerbated problems that plague Afghanistan: poverty, malnutrition, poor sanitation, lack of access to health care, and environmental degradation. In Iraq, too, the health, infrastructure and education systems devastated by war remain in shambles.

After the initial routing of the Taliban and al-Qaida in Afghanistan, the subsequent years of war have not made the world safer or better. Instead, we face a long future of political instability.

The wars have been a fiscal disaster, as well.

The cost of the conflicts in Iraq and Afghanistan total $4 trillion to $6 trillion, Linda Bilmes of Harvard University estimated in a study released last year. (With Memorial Day fresh in memories and the news of the failure of the Department of Veterans Affairs to meet the needs of servicemen and servicewomen, it is worth noting that almost a trillion dollars is in promissory notes for veterans' health benefits.)

Because the wars were financed through borrowing, we have added $2 trillion to the national debt, contributing about 20 percent of the total national debt added between 2001 and 2012. We've already paid $260 billion in interest on the war debt and future outlays are likely to reach into the trillions. "This level of debt is thus one of the reasons the country faces calls for austerity and budget cuts," Bilmes wrote. This debt hangover is a major reason the U.S. economy is fragile, unemployment remains high and recovery tentative.

It could be argued that the AUMF resolution can't be blamed for all these problems, but we would counter by saying that because AUMF stifled political discussion, the search for alternatives ceased. The idea of including social and economic development planks in our foreign policy is no longer a financially viable option. The hammer of AUMF became the only tool in our toolbox, and every problem has been a nail. Syria and Ukraine are cases in point: Whether we should intervene militarily or not is the only question asked.

We should not forget that there was a time, shortly after Sept. 11, 2001, that the U.S. had the opportunity to engage a large part of a willing world in discussions about what should be done. Instead, we rushed into the use of old military categories and language to deal with a problem for which those methods were horribly inadequate.

Uncalculated in the tallies above is the psychic damage AUMF has done to our society. It has been used as cover for some of the ugliest, darkest and most disturbing episodes in our national history. Under the shadow of AUMF, we found public officials authorizing and then defending torture, secret prisons on foreign soil and indefinite detention at Guantánamo Bay. It has been used to justify drone strikes in Pakistan and Yemen, and military actions in places as far-flung as the Philippines and Somalia, there against terrorist groups that didn't exist when the twin towers fell. The Justice Department even cited it in defense of the National Security Agency's electronic surveillance of Americans.

Attempts to end or amend AUMF have failed repeatedly, despite bipartisan support. Truth be told, that bipartisan support has radically different ends in sight. Some want to amend the authorization to make it, in the words of Sen. John McCain, R-Ariz., "more explicitly consistent with the realities today, which are dramatically different from what they were on that fateful day in New York and Washington." Some, like Rep. Adam Schiff, D-Calif., see little point in the unending nature of the authorization. Schiff's proposal to put a sunset date on the resolution that would have forced a debate in Congress died on the House floor. We would welcome the debate Schiff called for, but put ourselves in a third group: those who simply want the failed policy to end.

Thirteen years ago, Congress abdicated its responsibility to check the juggernaut of war. Our democracy and the world community have suffered and continue to suffer. It is time to end AUMF.

Editorial | Editorial: It's time to end the perpetual war

Religion and war in the Central African Republic

'American Sniper': A question of heroes