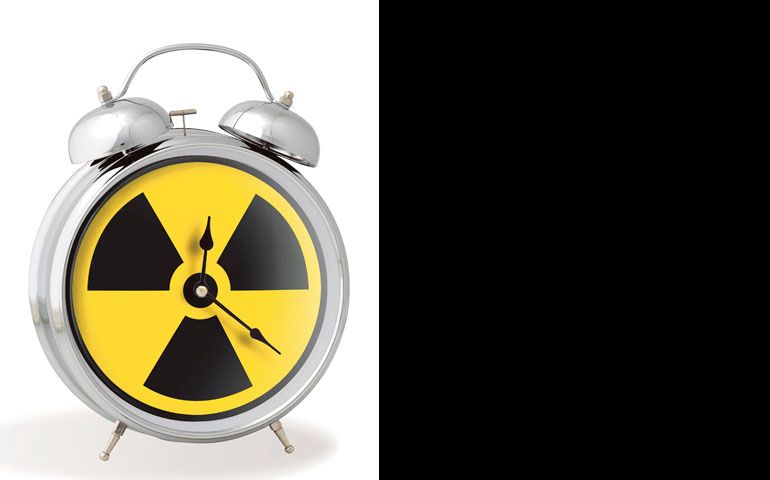 On Jan. 24, 1961, three U.S. Air Force B-52 bombers were flying over the East Coast. One, carrying two hydrogen bombs, reported an oil leak in its left landing flap. Hours later, during an in-flight refueling, a funnel broke off the plane's tank and fuel began pouring from its right wing. Ninety seconds later, the aircraft was losing equilibrium. The pilot asked to land at a local Air Force base, but was told to first dump more fuel to lessen the risk of a fire upon landing. As the plane eventually began its descent, the pilot reported a loud bang -- and the plane went into a nosedive. The crew ejected; as the plane cracked in two, the nuclear bombs separated from the aircraft. One descended beneath a parachute; the other crashed, drilling 20 feet into muddy soil near Goldsboro, N.C.

The story of this accident, known as the Goldsboro Incident, is in Rudolph Herzog's 2013 book, A Short History of Nuclear Folly: Mad Scientists, Dithering Nazis, Lost Nukes, and Catastrophic Cover-ups, which details how close our nation came to a catastrophic nuclear explosion. Herzog writes: "At first, the U.S. Air Force denied that there had been significant risk of an accidental detonation. But in 1983, former Secretary of Defense Robert McNamara admitted that the bomb with the parachute had gone through all but one of the seven automatic steps toward detonation." Each megabomb had 250* times more destructive tonnage than the one the U.S. exploded over Hiroshima in 1945.

Early last month, the National Security Archive, a nonprofit organization that uses the Freedom of Information Act to pry open classified U.S. documents, published a report confirming just how close the bombs in the Goldsboro Incident came to exploding. "Both multi-megaton Mk 39 bombs involved in the mishap were in the 'safe' position," the report states. "Yet the force of the crash initiated mechanical actions that normally required human intervention. In both cases, the 'fuzing sequence' had begun: an important step toward arming a nuclear bomb."

As a nation, we are kept largely in the dark about our stockpile of nuclear weapons. We seem to like it this way. We are led to believe these weapons deter nuclear attacks, and we go on with our lives without thinking much about their dangers or the morality of keeping them.

A 1981 Department of Defense study reported that 32 accidents involving nuclear weapons occurred between 1950 and 1980. The number of subsequent accidents has not been made public.

In the early days of the Cold War, the U.S. kept up to 12 bombers loaded with launch-ready nuclear weapons in the air at all times. In 1968, the continuous flights stopped, but bombers on the ground were kept on alert status 24 hours a day, ready to take off with their nuclear loads at a second's notice. That alert status finally ended in 1991: The bombers stood down, and the nuclear weapons were removed and put in storage.

Yet to this day, the U.S. and Russia maintain some 900 missiles and some 2,580 nuclear weapons on "launch-ready status." The logic has been that a fully deployed nuclear arms system on hair-trigger status -- one that could strike or retaliate within minutes -- protects the U.S. from surprise attack and keeps us "safe." Deterrence works best when the threat is credible and immediate.

The Cold War has ended, but substantial "deterrence" policies generated within that era remain intact, perpetuated by outdated circumstances and fears. What hasn't changed is the danger of human error and miscalculations, including miscalculations of intent. Recall, for example, that in 1995, Russian President Boris Yeltsin, believing his country was under nuclear attack by the U.S., rallied his generals to prepare a full-scale retaliation -- until he realized "the U.S. attack" was simply a Norwegian research rocket.

U.S. presidents have promised to "step down," that is, to move our nation out of hair-trigger alert status. Proponents of such change talk about "de-alerting" stockpiles to hours, then days, and eventually getting rid of nuclear weapons altogether.

In 2007, President Barack Obama stated he would work with Russia to take nuclear weapons off high-alert status, as did former President George W. Bush in 2000. They did not.

Russia, too, has balked at stepping back from high-alert launch status. In the U.S., a general lack of public awareness and a sense of nuclear complacency has meant little pressure has been exerted on U.S. policymakers. But the clock continues ticking.

Strong leadership is required -- the kind of leadership Obama showed upon entering office, the year he received a Nobel Peace Prize for taking on the nuclear beast. But this won't happen without public awareness and public pressure.

President John Kennedy captured the gist of the matter 53 years ago, when he spoke about a "nuclear sword of Damocles, hanging by the slenderest of threads, capable of being cut at any moment by accident, or miscalculation, or by madness." That sword still hangs -- and we still live in a world of accidents and miscalculations, a world still capable of madness.

*Correction: An earlier version of this editorial overstated the destructive tonnage of the Goldsboro bombs compared the the Hiroshima bomb.

Editorial | Editorial: Leadership is needed to take on the nuclear beast