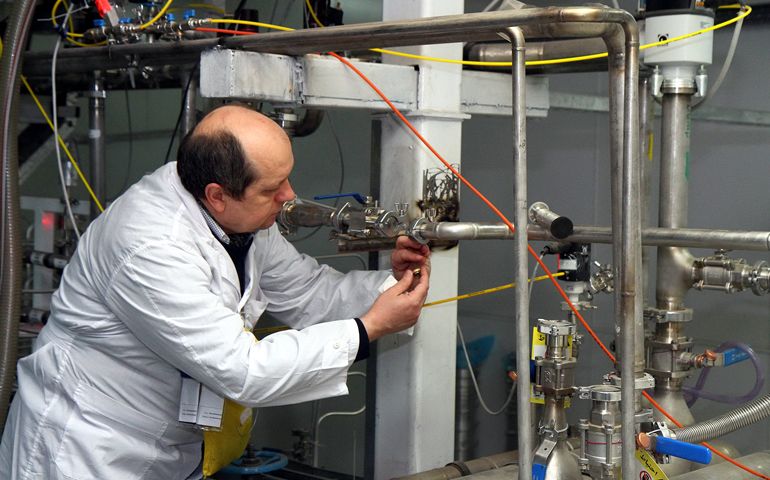 In the next few months, we will see the emergence of either a comprehensive, internationally backed plan that will keep nuclear weapons out of Iran's arsenal, free that nation from economic sanctions, and welcome Iran into a more stable and functional relationship with the global community, or we will see a newly isolated Iran again racing to develop nuclear weapons and a Middle East even less stable than it is today.

Over the last two years, a strong, cohesive and coordinated international effort has made significant progress on this issue. Britain, China, France, Germany, Russia and the United States have forged a successful partnership that has convinced Iran to stop producing its most highly enriched uranium, to limit its production of new centrifuges for enriching uranium and to refrain from installing additional centrifuges. At the same time, the International Atomic Energy Agency has gained improved access to Iranian nuclear facilities to ensure Iran is living up to its commitments.

More importantly, this partnership has won the trust of Iranian negotiators and thus has the time to hammer out a long-term settlement to the Iranian nuclear issue.

Last November, the six partners and Iran extended the negotiating period to June, and reaffirmed that decision last month. A long-term, negotiated, peaceful settlement is in sight. With so much going wrong in the international community today, the situation in Iran is an instance of hope. But its final success is far from certain.

Over the last month, Iranian President Hassan Rouhani has been building popular support for the nuclear agreement, reassuring his citizens that the cure for Iran's troubled economy is the lifting of sanctions and the normalizing of international relations. U.S. President Barack Obama is doing all he can to keep talks on track. However, both presidents face tremendous domestic pressure.

Rouhani is battling hard-liners who mistrust the direction of current talks and have a separate ideological agenda tied up with Hamas and Hezbollah. Rouhani's moderates and the hard-liners both are looking to strengthen their positions. Rouhani's advantage lies in delivering economic relief by easing sanctions; the hard-liners will play up Iranians' fear of the West in general and Israel in particular.

Recent actions in the U.S. Congress are weakening Rouhani's hand and strengthening his opponents. House Speaker John Boehner bypassed the State Department and invited Israeli Prime Minister Benjamin Netanyahu -- who has his own reasons to play up fear of Iran -- to address Congress just ahead of Israel's national elections. Boehner's move is not only an egregious breach of protocol but detrimental to the Iranian nuclear settlement.

Continued talk by congressional leaders, mostly Republicans but a few Democrats, of increasing economic sanctions against Iran also threatens the negotiating process just at a time when it most needs to be bolstered. The most recent attempt is a bill sponsored by Sens. Bob Menendez, D-N.J., and Mark Kirk, R-Ill., to renew sanctions against Iran. Obama will without a doubt veto any sanction legislation Congress may pass, but at this stage of negotiations, the talk of sanctions threatens the process.

Writing in The Washington Post Jan. 21, the foreign ministers of Britain, France, Germany and the European Union said, "We may have a real chance to resolve one of the world's long-standing security threats -- and the chance to do it peacefully. We can't let that chance pass us by or do anything to derail our progress. We have a historic opportunity that might not come again. With the eyes of the world upon us, we must demonstrate our commitment to diplomacy to try to resolve the Iranian nuclear issue within the deadline we have set. That is the surest path to reaching a comprehensive, lasting solution that will make the world and the region safer."

We cannot allow petty partisanship to derail this agreement. Through his tenure as Speaker of the House, Boehner has allowed political gamesmanship to rule debates on budgets and health care. His invitation to Netanyahu can only be seen in this light -- it serves no purpose but to poke Obama in the eye. It advances no policy agenda, but threatens the negotiations with Iran. It is too much to believe that Netanyahu will be disinvited, but it can be wished for.

Congressional leaders can and should withdraw all attempts to modify the sanctions regime. That was the advice former national security advisers Brent Scowcroft, a Republican, and Zbigniew Brzezinski, a Democrat, gave the Senate Armed Services Committee last month when they testified against the Menendez-Kirk proposal to renew sanctions.

Last summer, House Reps. John Conyers, D-Mich., Keith Ellison, D-Minn., Jim McDermott, D-Wash., and Jim McGovern, D-Mass, led an effort that successfully killed a similar measure. This is the kind of congressional leadership we need now. The president, his State Department and the international community must be allowed to complete the work they have begun.

The deal with Iran: Give peace a chance