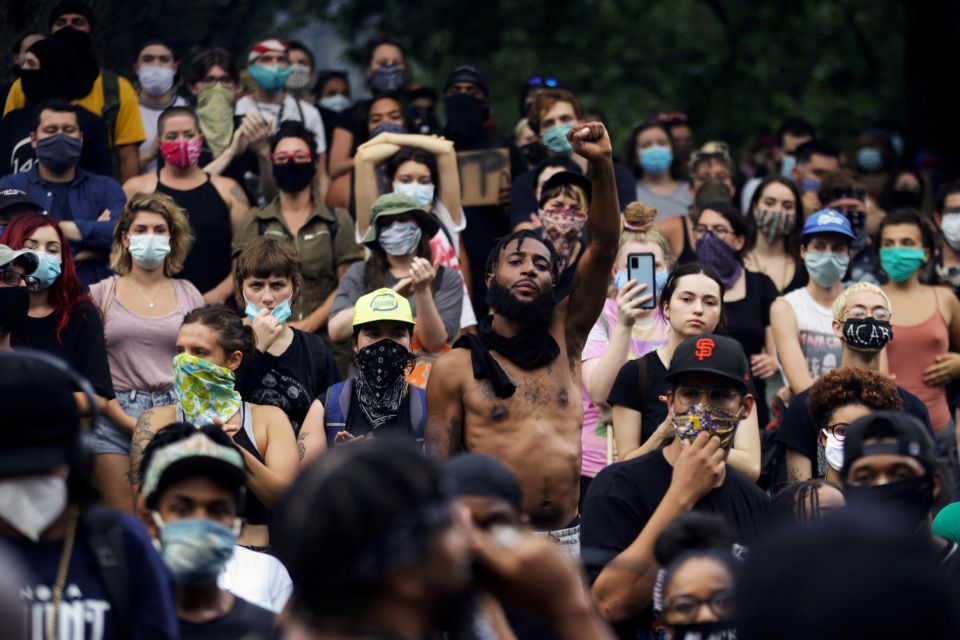 Protesters in New Orleans gather May 30, 2020. Demonstrations continue after a white police officer in Minneapolis was caught on a bystander's video May 25 pressing his knee into the neck of George Floyd, an African American, who later died at a hospital. (CNS/Reuters/Kathleen Flynn)

Washington — The killing of George Floyd in Minneapolis "was senseless and brutal, a sin that cries out to heaven for justice," and protests taking place nationwide "reflect the justified frustration and anger" of millions of Americans who today suffer because of racism, said the president of the U.S. Conference of Catholic Bishops.

"But the violence of recent nights is self-destructive and self-defeating," said Archbishop Jose H. Gomez of Los Angeles. "Nothing is gained by violence and so much is lost. Let us keep our eyes on the prize of true and lasting change."

What the Rev. Martin Luther King Jr. said is "true ... that riots are the language of the unheard," the archbishop continued. "We should be doing a lot of listening right now. This time, we should not fail to hear what people are saying through their pain. We need to finally root out the racial injustice that still infects too many areas of American society."

Gomez asked, "How is it possible that in America, a black man's life can be taken from him while calls for help are not answered, and his killing is recorded as it happens?"

Floyd, 46, was arrested May 25 by police on suspicion of forgery. Once he was handcuffed, a white officer pinned him down on the street, putting his knee on Floyd's neck for eight minutes. A now widely circulated video shows Floyd repeatedly saying, "I can't breathe." He appears to lose consciousness or die and was later declared dead at the hospital.

The four officers involved in the arrest were fired; the former officer who put his knee on Floyd, Derek Chauvin, was arrested May 29 and charged with third-degree murder and manslaughter, but the investigation into Floyd's death is ongoing by state prosecutors and by the U.S. Department of Justice.

Gomez's May 31 statement followed a joint statement from the chairmen of seven USCCB committees issued late May 29. The committees include the Ad Hoc Committee Against Racism, the Subcommittee on African American Affairs and the pro-life, domestic policy, cultural diversity, ecumenical and interreligious affairs, and the Catholic Campaign for Human Development committees.

The committee chairmen said they "are broken-hearted, sickened and outraged to watch another video of an African American man being killed before our very eyes. ... This is the latest wake-up call that needs to be answered by each of us in a spirit of determined conversion," the chairmen said.

In his statement, Gomez said he is praying for Floyd and his loved ones, "and on behalf of my brother bishops, I share the outrage of the black community and those who stand with them in Minneapolis, Los Angeles and across the country."

"The cruelty and violence he suffered does not reflect on the majority of good men and women in law enforcement, who carry out their duties with honor," the archbishop said. "We know that. And we trust that civil authorities will investigate his killing carefully and make sure those responsible are held accountable."

The protests that are ongoing in many U.S. cities "reflect the justified frustration and anger of millions of our brothers and sisters who even today experience humiliation, indignity, and unequal opportunity only because of their race or the color of their skin," Gomez stated. "It should not be this way in America. Racism has been tolerated for far too long in our way of life."

But he called the violence of recent nights "self-destructive and self-defeating."

"Legitimate protests should not be exploited by persons who have different values and agendas. Burning and looting communities, ruining the livelihoods of our neighbors, does not advance the cause of racial equality and human dignity," he said.

"We should not let it be said that George Floyd died for no reason," Gomez said. "We should honor the sacrifice of his life by removing racism and hate from our hearts and renewing our commitment to fulfill our nation's sacred promise — to be a beloved community of life, liberty and equality for all."

Justice | Gomez: Killing of Floyd is a 'sin that cries out to heaven for justice'

Religion News Service: Our 11 best stories from a terrible year