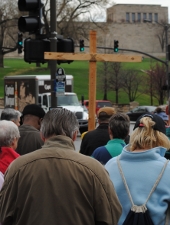 Catholics active in peace and justice issues expect to gather in cities across the country tomorrow for public processions, vigils and civil disobedience -- all with the aim of connecting the suffering of Christ commemorated on Good Friday with the suffering of people around the world.

From New York to Oregon and many places in between, groups plan to host “Way of the Cross” walks. Others are preparing public actions of civil resistance in opposition to U.S. military involvement abroad.

Members of local Pax Christi groups will host many of the "Way of the Cross" walks. Taken together, those walks of faith represent a “special kind of prayer,” said John Zokovitch, Pax Christi USA’s director of national field operations.

“We believe that the suffering of Christ on the Cross is intimately connected to the suffering of our sisters and brothers today caused by greed, violence, injustice and oppression,” Zokovitch said.

“Public Way of the Cross processions on Good Friday help us to articulate that connection for others to see, while also deepening our own commitment to work for a world where resurrection is practiced.”

In order to give some scope on what will be happening, below are short reports of events taking place in three cities over the next few days. For more information, including events in many other cities, click here to visit a listing on the Pax Christi USA Web site.

Activists are planning a Friday act of civil disobedience at Hancock Airfield in Syracuse to call attention to the U.S. military’s continued use of attack drones abroad.

Pilots with the New York State Air National Guard control at least 14 of the remotely operated unmanned vehicles from the airfield.

After a rally there Friday morning, at which the activists will deliver a petition outlining why they believe the drone attacks are illegal under international law, some of them will lay down in a symbolic “die-in” on the road leading into the complex, said Ellen Grady, an organizer with the group.

Friday’s event follows a week of activities calling attention to the U.S. drone program. Starting last Sunday, about 50 people walked the 60 miles to Syracuse from Ithaca, N.Y. Today, they are hosting a vigil outside the Syracuse federal building.

Leading up to the action at the airfield tomorrow, they will walk the four miles from downtown Syracuse to the complex. Stops along the way for prayer are slated to include a local military recruiting center and a veteran's center.

Grady, who is from Ithaca, said that while activists didn’t want the action to be “exclusively Christian,” they chose the Good Friday date to symbolize that “the crucifixion of Christ continues today with the use of these drones and the continuation of our wars.”

Martha Hennessy, an activist who is participating in the event and recently visited victims of drone attacks in Afghanistan, said she wanted to speak “directly to this issue of drone warfare” after that visit.

She said she was drawn to the witness because of its connection with the suffering Christ experienced before his death.

“Christ is being crucified still,” said Hennessy, who is also the granddaughter of Catholic Worker co-founder Dorothy Day. “And I need to participate in that suffering. I need to understand and feel that suffering. My heart needs to be open to other people suffering if I’m going to be a good Christian. The option that I have to me is this kind of experience.”

Speakers at Friday’s rally are expected to include Kathy Kelly, the co-coordinator for Voices for Creative Nonviolence; Elliott Adams, the president of Veterans for Peace; and retired U.S. Army Colonel Ann Wright.

A listing on the Voices for Creative Nonviolence identifies 20 co-sponsors of the action, including several chapters of Veterans for Peace, the Ithaca Catholic Worker community, and the Syracuse Peace Council.

For the 31st year, the 8th Day Center for Justice will be hosting a “Walk for Justice” through the downtown area of the city Friday.

Participants will gather at noon outside the city’s Board of Trade building. Led by a group of thematic actors, they will stop at different locations to call attention to issues such as immigration and violence against gay and lesbian youth as they mark 10 stations commemorating Christ’s suffering.

Those gathered will read from a booklet of prayers as they walk. The procession will end outside the James R. Thompson Center, home of several Illinois State government offices.

The prayer booklet lists more than 80 co-sponsors for the event, including the city’s chapter of the Call to Action 20/30 young adult group and the Chicago Religious Leadership Network on Latin America.

The theme for this year’s walk, “There is no fear in love,” is drawn from a verse in the Gospel of John. In choosing that theme, Desautels said the group wanted to “open a space for love to speak truth to power.”

Said Desautels: “Jesus’ death … was caused by his living deliberately the values of inclusiveness, community and cooperation. His lifestyle created a disturbance in his own society. The powers … of his own time had him killed. That’s our story, so what’s our story today? What are the issues and who are the groups that are speaking out and resisting the powers and principalities of our day. What is it that we can say and pray relative to those issues?”

Area activists will host thematic vigils outside the Pentagon and White House Friday, and some may risk arrest in acts of civil disobedience.

The vigils are part of an annual three-day Holy Week “Faith and Resistance Retreat,” hosted by members of the Dorothy Day Catholic Worker and Jonah House communities.

Beginning Wednesday evening, activists from across the area gathered for prayer and reflection, based on the theme “Put away the sword; Follow Jesus in nonviolent revolution.” On Friday they’re expected to host “contemporary crucifixions” outside the government buildings.

The vigils are meant to portray the “ongoing crucifixion of Jesus” and his call to “end our complicity with the violence of war,” said Kathy Boylan, a longtime member of the Dorothy Day community.

During the ceremonies, attendees will tie participants to mock crosses and will place name tags on them to identify them as victims of violence, Boylan said. Those gathered will also sing the traditional hymn “Were you there when they crucified my Lord?” and read selections from Leonardo Boff’s book, The Way of the Cross, the Way of Justice.

Amidst the backdrop of the U.S. Capitol building, the Columban Center for Advocacy and Outreach also plans a Way of the Cross event for Friday.

During the “Economic and Ecological Way of the Cross,” participants will weave their way through landmarks such as the Labor department, the Treasury department, and the World Bank while praying in order to “stand up to the degradation of God’s creations,” said Ryan Murphy, a staff member at the Columban Center.

“We’ll be visiting different institutions that affect the economic justice or economic impact in our world,” Murphy said. “We’ll stand together asking them to respect the environment in our faith.”

Those gathered will also visit the Japanese Cultural Center “to pray in solidarity” with Japanese affected by March’s earthquake and its aftermath, Murphy said.

Oakland priest calls bishop a 'liar' and a 'racist'