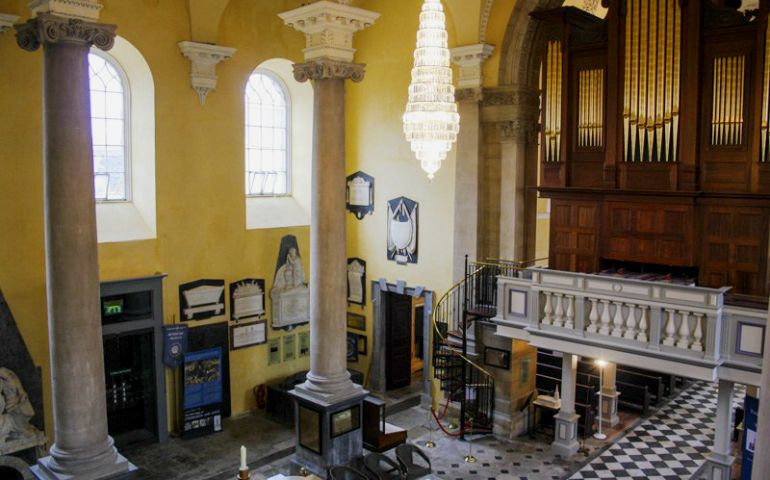 Dublin — Silenced for a year and a half, the "Joy Bells" of Christ Church Cathedral in the Irish city of Waterford will peal once again this St. Patrick's Day weekend in a message of fellowship and welcome to refugees and immigrants.

One of the country's most prominent Catholics, former President Mary McAleese, will officially relaunch the bells of the Church of Ireland Cathedral.

Dean Maria Jansson, the daughter of an Irish Catholic mother and a Swedish Lutheran father, has invited McAleese to set these bells ringing on March 19 at 11 a.m. after 18 months of repairs. The Anglican clergywoman explained to NCR that the pealing of the Joy Bells is an ecumenical, anti-sectarian "show of solidarity with all desperately seeking welcome and new lives among us."

But she emphasized that the initiative had a "broader remit than sectarianism."

"It is to protest against racism and xenophobia in all its forms," she said. "It seeks to add a different voice to the public realm, one where communities are committed to respect, the dignity of all persons under God and to welcome."

Jansson is appealing to other parish communities also to ring their bells on March 19* in a global message of no to intolerance. "Let us proclaim together through the bells our message of welcome, respect and solidarity with immigrants and refugees and people made invisible in their desperation," she said.

Already, churches in places as far-flung as India, Italy, Thailand and Malawi have pledged to ring their bells in solidarity. Some of the prominent backers of the initiative include the Irish Catholic bishops, Archbishop Eamon Martin at St. Patrick's Cathedral in Armagh and his Church of Ireland counterpart, Archbishop Richard Clarke, as well as Cardinal Vincent Nichols of Westminster, England, the Church of England's Archbishop Justin Welby, and U.S. Cardinal Joseph Tobin of Newark, New Jersey.

A ground-up initiative of one small community raising its voice and inviting others to join in, according to Jansson, has resulted in a groundswell of support as the word has gotten out.

"We live in an age where there is a desperate need for hope, direction, community, shared purpose and for God. We all share this mission," she said. "Is working together optional? We must work together, lest the Gospel be viewed as irrelevant, as a sideshow unable to address any of the issues of our age. The message of love, stewardship of God's Earth, care for the outsider are extremely pertinent. Unless we get our relationships right with each other, with creation ... I dread to think of the future we are creating for our children."

The Joy Bells initiative is taking place as Irish Prime Minister Enda Kenny is in the U.S. this week for St. Patrick's Day, raising concerns about the plight of 50,000 Irish illegal immigrants there under President Donald Trump's immigration crackdown.

Asked how the Joy Bells initiative challenges Trump's anti-immigrant stance and the vote for Brexit in the U.K., Jansson said, "Scapegoating is very dangerous but politically expedient. Pinning economic woes and cultural disaffection on Muslims, immigrants and refugees serves to detract from complex issues of corporate greed, political atrophy and social disintegration."

As a pastor, she underlined that hate-filled speech and action cannot be accommodated in the Gospel of Christ.

"If we dare to pray the 'Lord's Prayer,' 'Our Father ... thy kingdom come, thy will be done on earth as it is in heaven,' then as Christians we must challenge racism and xenophobia, not just in prayer but in action, not inaction."

"Will our bell peal of solidarity and love challenge the hate? Well, I doubt Donald Trump will lose sleep over a bell peal. But if it voices a different message in the public realm, gives heart to people to love their neighbors locally and welcome the desolate, then it will have served God's purpose," she said.

McAleese echoed her views, expressing concern that the rise in hate crimes in the U.S. and the U.K. is "extremely worrying" and appealing for any such crimes to be dealt with "robustly."

Speaking ahead of the arrival of the first batch of Syrian refugees to settle in County Roscommon in Ireland, McAleese said she hopes that Irish people won't get involved in the "kind of things that we heard of during the Brexit campaign or during the Trump campaign," such as the "name-calling, the stereotyping and the racism."

"My worry is that in other countries people sort of feel empowered now to be openly hostile and to be racist, as if that is acceptable," she warned.

"Part of what we hope to ensure with our bell peal is that no such intolerance ever occurs in our country, which has its own phenomenal history of being the immigrant elsewhere," she explained. She said there was nobody on the island of Ireland who doesn't have an emigrant cousin, uncle, aunt, sister somewhere in the world. "We know that story and we know how important a warm reception is to people."

She also paid tribute to Ireland for having "absorbed very significant numbers of non-Irish nationals over a very short period of time" and said that as a percentage of the community, the number of non-nationals is higher than it is in Britain.

"We have done that with a downturn in the economy and without resorting, at the political level, to the kind of things that we heard during the Brexit campaign or during the Trump campaign. I hope that that remains the case."

She stressed that this was not to say that there aren't people who have encountered hate crimes perpetrated by individuals. "I would like to think that we deal with that very robustly and stop that in its tracks," she said.

St. Patrick's Day weekend was deliberately chosen because the national saint is, according to McAleese, "by far the most famous and successful immigrant to Ireland."

"He was the trafficked child; he was the refugee and the immigrant who impacted on his adopted homeland in remarkable ways and made such a contribution," she said. "He tells us through his simple story how important it is to remain open to others and the gift others bring to us."

This, she added, was a "message to the world" as it experiences "a growth of intolerance that is focused on race and religion and ethnicity."

"The question of how do we respond to the stranger is one challenging many around the world," she said.

McAleese highlighted that "Europe is experiencing a growth of intolerance focused on race, religion and ethnicity, the United States is experiencing the same, and we only have to look at the damage caused to Islam caused by [the Islamic State group]. That is why, I suspect, there has been such an uptake of the 'Joy Bells' idea around the world."

She suggested that the ringing of the bells challenges people to ask what values they bring to their dealings with the 'other' — in particular, with those who may be politically or religiously or culturally very different from them.

"How do we respond when they come into our orbit due to force of circumstance — whether it is economic migration or whether it is migration forced upon people through violence and conflict? What kind of people do we become as a result of being tested by the presence of the stranger among us — do we become nastier and meaner, or do we become more generous and more open to whatever it is we have to offer?"

"It is to send out that message that a smile, a handshake, a welcome is by far the best response not just for those who are the strangers — it is a wonderful thing to feel welcomed — but also for those who offer the welcome."

"This is a moment that we chose to say that we stand for tolerance for all God's family whatever circumstances they find themselves in," she said. "Let's build and keep on building a place of common decency and civility for everybody — whoever they are."

[Sarah Mac Donald is a freelance writer living in Dublin.]

*This article has been edited to clarify the invitation to other churches.

A Thanksgiving Day prayer in a riven land