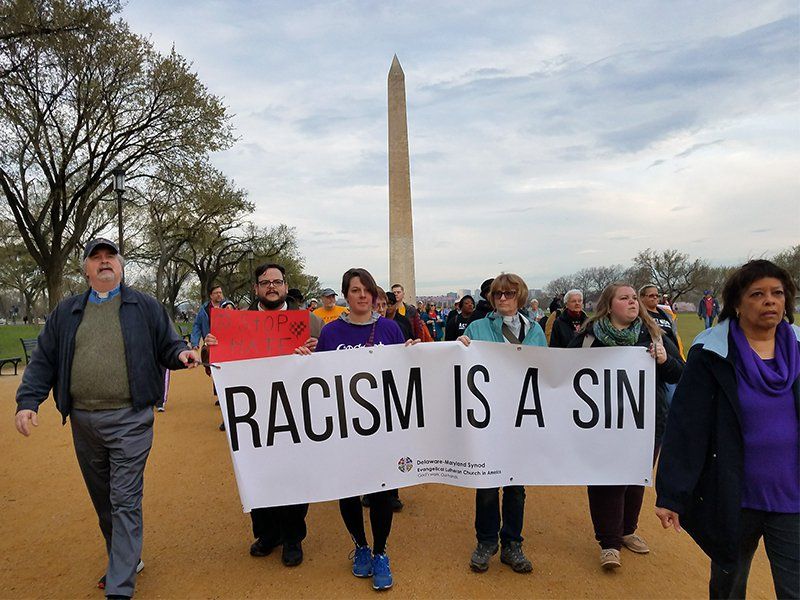 Participants in the A.C.T. to End Racism Rally walk along the National Mall on April 4, 2018, the 50th anniversary of the assassination of the Rev. Martin Luther King Jr. (RNS/Adelle M. Banks)

Washington — They began marching just after dawn from the Martin Luther King Jr. Memorial, 50 years to the day after the civil rights leader was assassinated.

They silenced their voices and, walking to the beat of a drum, traveled halfway down the National Mall. Some in sneakers and some in clerical stoles, they then prayed a spectrum of prayers — from Anglican to Zoroastrian — before they settled in for a set of speeches with a lofty subject: ending racism.

The A.C.T. to End Racism Rally, seeking to "awaken, confront and transform" society about racism, drew thousands of people on Wednesday (April 4). It was one of the largest events ever planned by the National Council of Churches, an ecumenical network of 38 groups including mainline, Orthodox, black Protestant and Quaker churches.

"It was Dr. King who talked about the three evils that stand in our way, and we can call them the three weapons of mass destruction," said the Rev. Toussaint King Hill Jr., pastor of West Hunter Street Baptist Church in Atlanta and a cousin of King. "We can say racism. We can say economic inequality, and we can say militarism. Those three evils still permeate our land."

Speaker after speaker throughout the day said King's vision had not been realized and it was up to leaders of houses of worship to act directly to achieve his goals, most especially on combating racism, so the people over whom those leaders have influence no longer ignore its presence in society.

Some, such as a Mormon official whose church opened the priesthood to blacks 40 years ago, acknowledged that their houses of worship had been late in addressing the matter. Others pointed down the street to the occupant of 1600 Pennsylvania Ave. — "the Pharaoh in the White House," said Rabbi Arthur Waskow of The Shalom Center in Philadelphia — as a contributor to the nation's racial tensions.

But many looked ahead to the job they say needs to be done by religious leaders to move beyond those tensions.

"If you believe in the image of God you will make sure that there is not one vote suppressed in this next election," said the Rev. Jim Wallis, founder of Sojourners magazine and author of "America's Original Sin: Racism, White Privilege and the Bridge to a New America."

"To believe in the image of God means that we must form a multiracial, multifaith campaign to protect voters."

"Are you in?" he asked, saying this would be a theological rather than a political effort.

"Yes!" the crowd in view of the Capitol replied.

Between a Baltimore boys' choir singing "I Have a Dream" and gospel artist Yolanda Adams performing "I've Got the Victory," people listening took time out to talk about their personal next steps for addressing racism.

The Rev. Rob Keithan of All Souls Church Unitarian, a Washington congregation that has held a course to help whites become allies of blacks, plans a new series of multicultural "beloved conversations" in line with King's notion of a "beloved community." Keithan embraces the NCC's plans for a multiyear truth and reconciliation process.

"South Africa did this work long ago," he said. "The United States still has not done the work it needs to do."

Supporters ranged from Catholics to evangelicals who are part of social justice networks.

A Christian Church (Disciples of Christ) clergyman from the Midwest talked of working harder to recruit people of color as ministers.

"Everybody's got to be at the table," said the Rev. Bill Spangler-Dunning, Upper Midwest regional minister for the denomination. "It's not the whole body of Christ."

The Rev. Leslie Copeland-Tune, an organizer of the gathering and the director of Ecumenical Advocacy Days, said the rally was part of three days of events, including training sessions planned for Thursday at local Washington churches on how to lobby local, state and national politicians on issues related to racial disparities such as economic injustice, environmental justice, clean water and immigration. And she hopes for a sharing of resources among denominations that already have written guides so congregants can take a "deeper dive" on issues such as white privilege and racial injustice.

She said people often think they've done what is needed if they can say "I'm not using the N-word and I'm nice to people."

She added: "Really it takes a lot more than that."

As people gathered on the Mall, others have been meeting in other parts of the country — from the National Civil Rights Museum in Memphis, Tenn., located at the Lorraine Motel where King was killed, to the King Center, started by his family members in Atlanta after his death to continue his nonviolent mission. Evangelicals affiliated with the Southern Baptist Convention and The Gospel Coalition also gathered in Memphis for a two-day discussion of racial justice and unity.

Although the NCC was involved in the civil rights movement in the '50s and '60s, its recent past financial struggles suggested such an event might not be possible for the ecumenical group. In 2013, it left its longtime headquarters in New York known as the "God Box" for offices on Washington's Capitol Hill and dramatically reduced its staff and operations.

NCC President Jim Winkler said his agency is past "that near-death experience" and its member denominations are ready to jointly take on what he called "the toughest issue in the entire history of North and South America. That is the legacy of slavery and racism and we're going to do it fearlessly."

The night before the event on the Mall, some ralliers who arrived early sat beneath the Byzantine dome and icons of Washington's St. Sophia Greek Orthodox Cathedral and were told that the notion of ending racism should not be considered an impossible task.

"Certainly, ending racism might seem like an aspiration but, like the very first disciples, we followers of Jesus are called to bear witness to something that the world cannot yet believe is possible," said the Rev. Sharon Watkins, director of the NCC's Truth and Racial Justice Initiative and the president of the Christian Church (Disciples of Christ). "We are called to say this can happen. Racism can end."

Fifteen-year-olds Lily Quintero and Margaret Holland, who traveled from Vermont with their multicultural United Church of Christ youth group, were impressed to hear white people like Watkins — and other perfect strangers — addressing a cause long a concern for them as teens with mixed racial backgrounds.

"It's kind of nice," said Quintero in the balcony of the Orthodox cathedral for the "ecumenical gathering to end racism" held hours before the Mall event.

"I don't know any of these people and they're kind of like fighting for my cause with me," said Holland.

Bishops' call for peace amid racism is obscure, counterproductive