Mexican bishops concerned over fate of migrants, including Haitians 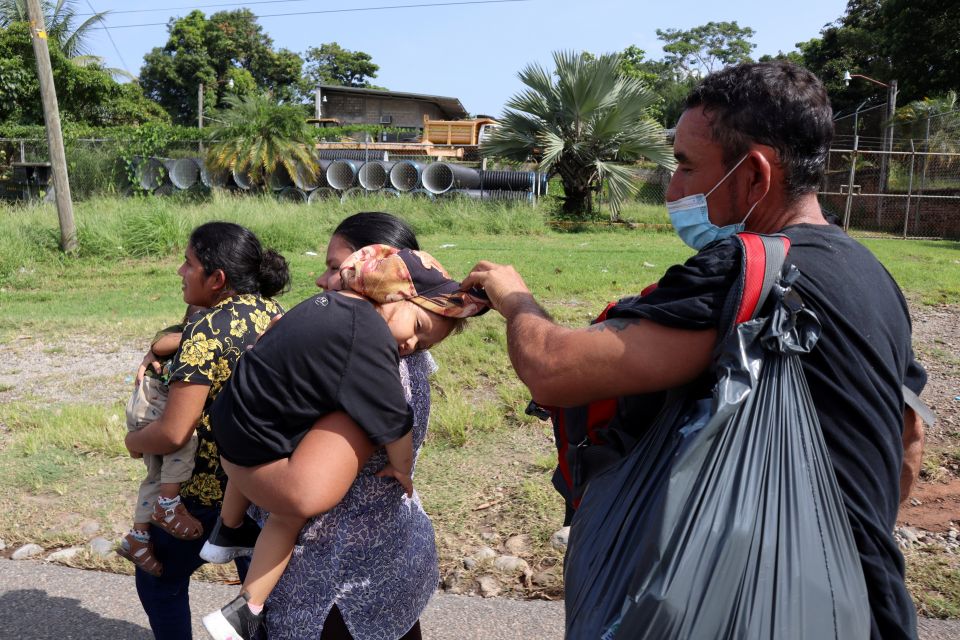 Migrants and asylum-seekers from Central America and the Caribbean walk in a caravan in Tapachula, Mexico, Aug. 28, 2021. They are headed to the Mexican capital to apply for asylum and refugee status. (CNS photo/Jose Torres, Reuters)

Mexico City — The Mexican bishops' migrant ministry has disavowed a proposal from Mexico's National Immigration Institute that would establish a camp for migrants and asylum-seekers stuck in the southern city of Tapachula, near the border with Guatemala.

The issue seems to have generated some confusion.

In a brief statement issued Sept. 2, the bishops' ministry said the idea of a camp for Haitians in Tapachula was proposed publicly to the migrant ministry during a conference on migration "without the existence of any agreement or acceptance of this topic."

"The (ministry) is concerned about the conditions in which migrants find themselves in Tapachula: overcrowding, insecurity or lack of work, which can lead to violations of the human rights of these people," the bishops' statement said.

Responding to the National Immigration Institute, the Mexico office of the U.N. High Commissioner for Refugees said in a Sept. 2 tweet that the institute "had just sent the request" and the "issue of the Haitians is complicated."

The statements followed news of three caravans of migrants — involving many Haitians — setting out from Tapachula, in an attempt to reach central and northern Mexico and the U.S. border.

Mexican immigration and security forces have impeded the caravans, which have proceeded along a coastal highway in Chiapas state.

Video uploaded to social media showed immigration officials corralling and detaining some of the caravan travelers by force. The scenes have drawn indignation from many in Mexico, where the government has been publicizing the arrival of refugees from Afghanistan.

"The three (caravans) have been broken up by the government, but with inhuman treatment," said Father César Cañaveral, diocesan director of migrant ministries in Tapachula. "It's being done like a hunt. They're not distinguishing which people are being hit. They're hitting everyone the same: children, women. There's a lot of human suffering there."

The Diocese of Tapachula has provided food and water to migrants as they walk under intense sun and pouring rains.

Father Cañaveral says the caravans formed out of desperation as people are "living in inhumane conditions."

He added that many migrants cannot obtain safe passage documents, and those applying for asylum are not receiving appointments until January 2022.

Mexico's refugee assistance agency has received more than 77,500 applications, a record, in the first eight months of 2021. This is 10% more than the total applications made in 2019, agency director Andrés Ramírez said on Twitter.

Justice | Mexican bishops concerned over fate of migrants, including Haitians