Mexican bishops express solidarity with migrants as caravan is disrupted 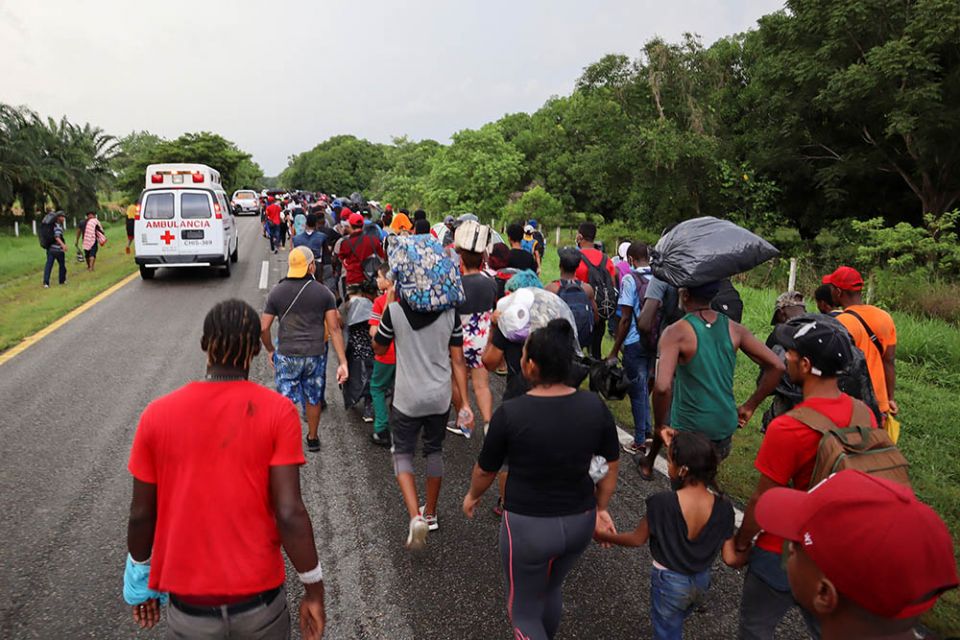 Migrants from Central America and the Caribbean walk in a caravan near Escuintla, Mexico, Aug. 29. They were headed to Mexico City to apply for asylum and refugee status. (CNS/Reuters/Jose Torres)

Mexico City — Mexican church leaders expressed solidarity with a caravan of migrants that was disrupted by security forces. Their reaction came after nationwide outrage about videos that surfaced showing an immigration agent kicking a migrant in the head.

A local parish in the municipality of Huixtla, meanwhile, provided food and clothing to some 400 members of the caravan Aug. 28, the same day it departed from a city near the Guatemalan border.

"[We] also share in the pain and the desperation of so many migrants, who are trying to save themselves from extreme poverty and violence in the face of international inability to generate life conditions of dignity, especially in poor, marginalized and battered countries," tweeted Auxiliary Bishop Alfonso Miranda Guardiola of Monterrey, secretary-general of the Mexican bishops' conference.

The caravan formed in Tapachula, Mexico, after migrants and asylum-seekers there — including many from Haiti — were unable to obtain documents for traveling through Mexico toward the U.S. border, said Fr. Heyman Vázquez of St. Francis of Assisi Parish in Huixtla.

Many of the caravan travelers had been stranded in Tapachula for months or longer, he said, adding his parish — 25 miles from Tapachula — has been supporting smaller groups of 20 migrants passing through on a daily basis.

"They're getting desperate being in Tapachula because they don't give them any documents and additionally ... there's no work," he said.

The caravan has been proceeding through scorching sun and pouring rain along a highway in Chiapas state, but has been met with force by Mexican national guard members in riot gear.

A document released Aug. 28 by a Mexican human rights monitoring network, which includes several Catholic-run migrant shelters, said many of the caravan travelers had some sort of migration document or were in the process of seeking asylum in Mexico, but were prevented from leaving Tapachula at migration checkpoints.

Caravans of migrants previously traveled through Chiapas state — most notably in late 2018 — but Mexican officials have dismantled such mass movements of people in recent years. Guatemala has also done the same in its territory.

The formation of a caravan came as U.S. border officials recorded migrant detention numbers not seen in two decades. It also came as the Biden administration seeks to slow the stream of migrants moving through Mexico — and once again seeks Mexican assistance.

Videos posted by journalists on social media showed Mexican security forces pushing and corralling migrants in the caravan. A viral video showed a migration official kicking a migrant in the head.

In a statement Aug. 29, Mexico's National Immigration Institute said it would investigate the actions of its agents and said, "The institute bases its actions on adherence to the legal framework and with strict respect for human rights."

Vázquez described the government's discourse and actions toward migrants as "contradictory," saying the president's discourse "is very nice toward migrants, but institutions, immigration, the authorities, the federal and state police and including the national guard ... they abuse migrants."

On Aug. 29, the Mexican government provided refuge to a third group of 86 people fleeing Afghanistan; most were media workers with The Wall Street Journal, according to the foreign ministry. The government policy of welcoming Afghans, while repressing migrants at its southern border, caused questions.

"There is no consistency, nothing solid and no pattern of conduct in Mexican immigration policy," said Javier Urbano, migration expert at the Jesuit-run Iberoamerican University, who described the decision to accept Afghans as "situational."

US-created crisis is now a humanitarian disaster at Mexico's doorstep