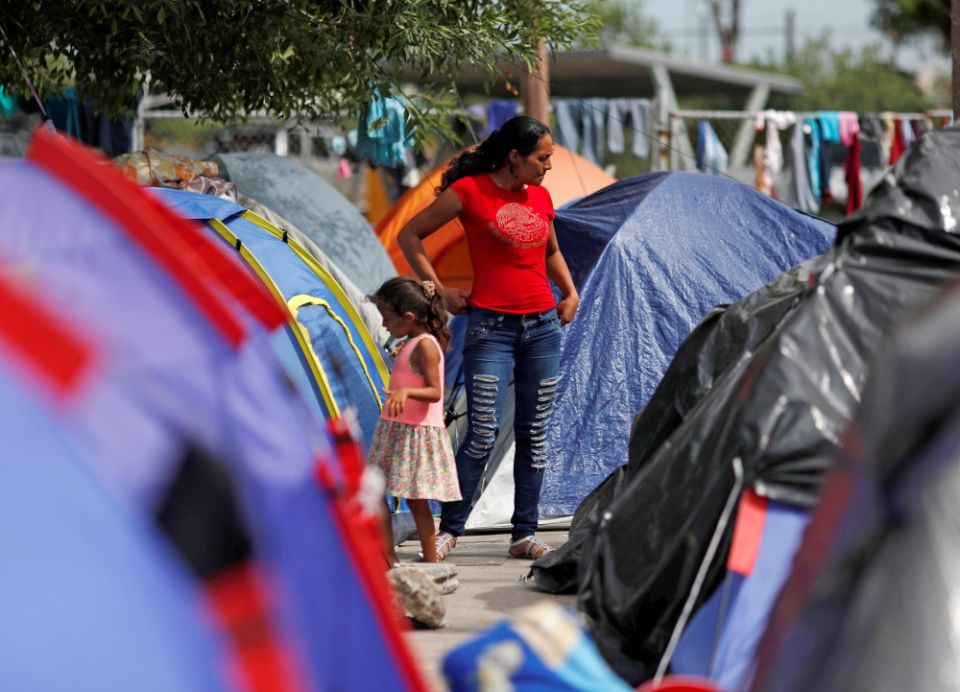 Central American migrants are pictured in a file photo outside their tent at a camp in Matamoros, Mexico. (CNS photo/Reuters/Henry Romero)

Matamoros, Mexico — When Sr. Norma Pimentel used to query the needs of asylum-seekers in a tent camp along the Rio Grande in this Mexican border city, they asked for supplies such as utensils and blankets. Now when she speaks with them, they voice fears for their safety and ask about an exit.

"We're moving to a more desperate situation: 'Get me out of here, I'm afraid for my child,'" she said they tell her.

Residents of Dignity Village—populated by asylum-seekers waiting in Mexico as their cases proceed in U.S. courts, part of the Migrant Protection Protocols plan—have endured everything from cold snaps to hurricanes, from rats and snakes to vermin infestations, and from criminal gangs kidnapping them to the COVID-19 pandemic.

But fear has gripped the camp in recent weeks as at least seven individuals have been found murdered with their bodies left along the river's edge in an area where camp residents used to wash and bathe.

"It's hard to know (what's happening) because the authorities are not saying and they're not identifying the person. They're saying the (dead) person is from the city of Matamoros, but most of the people don't believe that," said Pimentel, a member of the Missionaries of Jesus and director of Catholic Charities of the Rio Grande Valley. "It's dangerous and everyone wants out."

As time drags on, desperation sets in, especially as the temporary tents residents use become battered by the elements—Hurricane Hanna stormed through in August, nearly flooding them out—and the COVID-19 pandemic postpones their U.S. court appearances for the foreseeable future.

"There's nothing in sight that can really move them forward. ... They have endured months of hardship, and COVID-19 doesn't make it any easier," said Pimentel.

The camp's population has dwindled to less than 1,000 residents, roughly a third of its peak occupancy. Some returned to their countries of origins, while others have moved to better accommodations. Some asylum-seekers are staying put in Mexico and applying to stay, though Pimentel said many of them "don't see themselves prospering or being safe, so Mexico isn't considered" as an option.

Some of the camp residents are also attempting to cross the Rio Grande into the United States—a risky proposition, according to three individuals working with migrants. They said the river has deceptively strong currents, and organized crime demands a payment to attempt the crossing.

"You have to pay them $500 to do that. ... They're not going to try to help cross you, they're simply just giving you permission to cross," Pimentel said. "If they happen to send you back, you're in trouble, and they make sure to let you know that."

Rodrigo Castro, an asylum-seeker from Guatemala and camp leader, was found dead by the river Aug 18. It was initially believed Castro had drowned while trying to rescue a person from the river, but rumors of foul play are rife in the camp, and a source who knows his family says it was a murder to "send a message" for those crossing the river without paying.

At least six other individuals have been found dead in the area, according to three sources consulted by Catholic News Service, though it's uncertain they were camp residents. 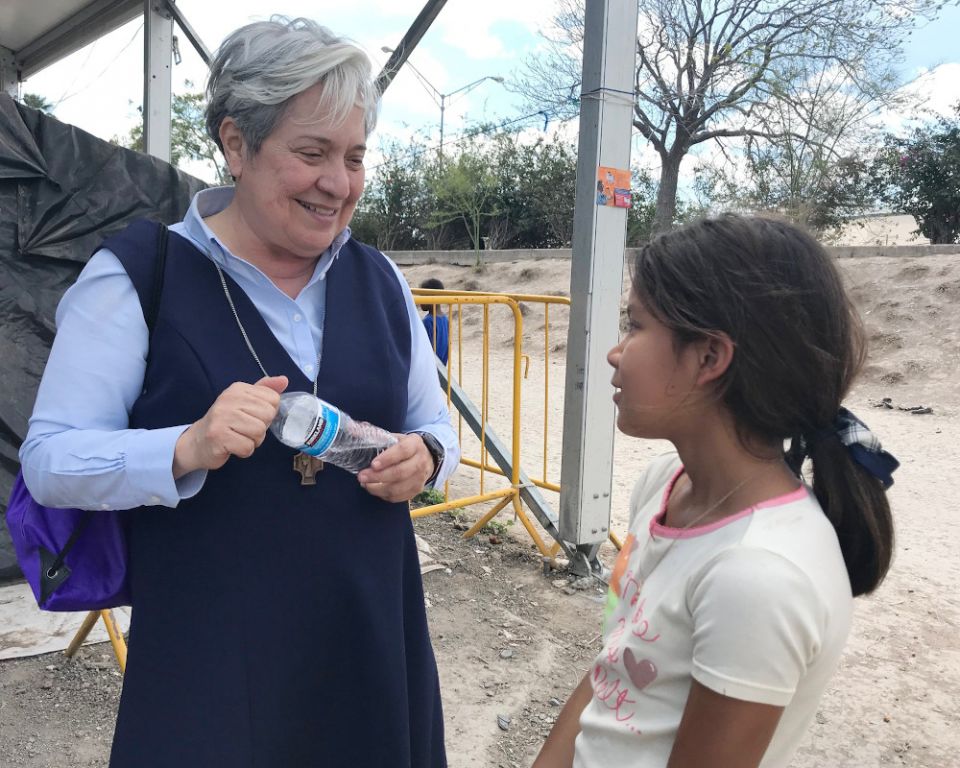 Sr. Norma Pimentel, director of Catholic Charities of the Rio Grande Valley in Texas, speaks with a young resident of a tent camp in Matamoros, Mexico. (CNS photo/David Agren)

Maria, a camp resident from El Salvador, who asked that a pseudonym be used to protect her identity, described a desperate situation in the camp, which is prompting people to risk the river.

A person providing care at the camp said people were being treated for severe beatings meted out by organized crime. The beatings are known as "tablazos," in which a wooden stick is used to lash a person's body.

The control of organized crime over transmigration through the state of Tamaulipas dates back years, according to church people working with migrants. They warned that the Migrant Protection Protocols, unveiled in early 2019 and implemented later in Tamaulipas, would send asylum-seekers back to dangerous border cities.

The camp only added to the migrants' vulnerability, said Fr. Francisco Gallardo, head of migrant ministries for the Diocese of Matamoros.

In the meantime, Gallardo continues celebrating Mass at the camp and providing spiritual attention. His team also works to facilitate requests from camp residents to settle in Mexico or return to their countries of origin.

Pimentel often deals with Mexican immigration officials, taking requests from residents to them for consideration. She also listens to petitions, such as the pleas of a group of pregnant women, who were wondering if U.S. officials would expedite their hearings.

For all the desperation, she said, many have not given up hope on reaching the United States for one simple reason: "They can't return to their countries."