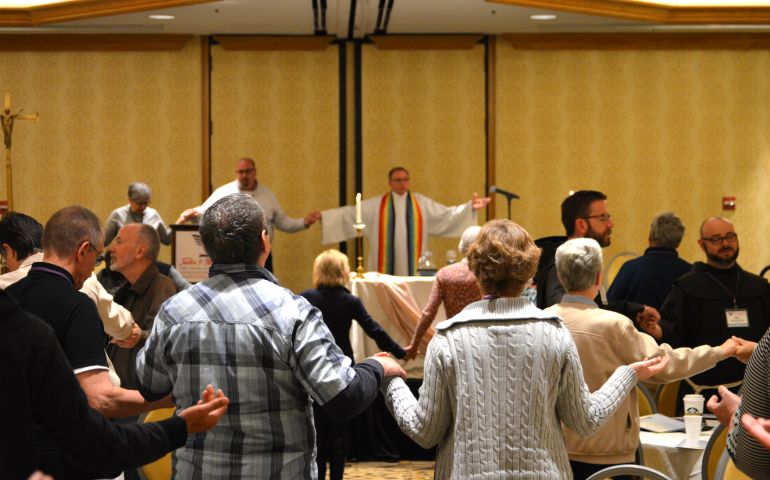 Chicago — New Ways Ministry, the 40-year-old advocacy group for LGBT Catholics, brought its eighth national symposium here April 28-30 with what one presenter called feelings of both "hope and frustration."

The conference highlighted the sense of optimism that under the leadership of Pope Francis there was reason to hope for a lessening of discrimination towards gays and an advancement of their civil rights within the church.

At least two of the symposium's seven workshops dealt with challenges of LGBT church workers. New Ways Ministry's theme "Justice and Mercy Shall Kiss, LGBT Catholics in the Age of Pope Francis" made frequent mention of the drive for equality for LGBT persons.

The Maryland-based group maintains a catalogue of employment-issue cases. It lists 46 publicly identified incidents since 2010, in which LGBT persons or others supporting LGBT issues have lost their jobs or been let go from volunteer ministries in the United States. Several other cases are publicly known outside the United States.

At the Chicago gathering, 40 priests and brothers — many of them out as gay men with decades of ministry in the church — listened as Fr. Warren Hall told of being fired as a campus ministry chaplain at Seton Hall University in South Orange, New Jersey, in May 2015.

Newark Archbishop John Myers dismissed Hall for having posted a photo of himself at a NOH8 (No Hate) campaign rally in New York in the autumn of 2014. Hall, who taught classes on sports and spirituality at Seton Hall, said he attended the event to learn more about the group's anti-bullying platform.

Myers saw it differently. He noted that NOH8 had emerged from the struggle for same-sex marriage in California. However, two months after Hall's dismissal from the university, Myers assigned Hall to assist at two parishes in Hoboken and Weehawken, New Jersey. Hall said he shared his story of being a gay man with parishioners at both churches; he told of his 27-year commitment to his vow of celibacy and said he urged other gay Catholics to stay in the church and to work for greater acceptance.

In summer of 2016, Myers suspended Hall from all priestly duties, noting that his actions in support of a New Jersey Catholic high school counselor and coach, whose same-sex marriage had been outed on Facebook, constituted actions that are "confusing the faithful."

Since Hall's suspension, Myers has retired. In January, the Newark Archdiocese came under the leadership of Cardinal Joseph Tobin, who is seen as far more open on LGBT issues. Asked by priests at the workshop whether he would seek reinstatement, Hall said, "No."

"I have lived in the Newark archdiocese all my life," he said. During the time of his dismissal and later suspension, he said he had only heard from three priests. "No others called to ask how I was doing, if I needed anything," Hall said.

His statement echoed those heard often during the three-day gathering. "If we think the bishops are dysfunctional, what about us?" one priest asked. "Haven't we been living in silence, fear and secrecy for years?" Another noted how being homosexual had meant "internalizing shame" for much of his lifetime.

For that reason and others, a number of participants arrived early to take part in a day-long retreat and meditation session given by Social Service Sr. Simone Campbell. "We all desperately need a nest where we can land and rest and tell our stories," she said before sharing some of her poems with the group.

"If someone is gay and searches for the Lord and has a good will, who am I to judge? We shouldn't marginalize people for this. They must be integrated into society." These now-famous words uttered by Francis on a 2013 flight back to Rome from Brazil were ones Fr. Bryan Massingale said he never expected to hear in his lifetime.

Massingale, a priest of the Milwaukee archdiocese, shared a note he had received in 2002 from Rembert Weakland, who earlier that year had resigned as archbishop of Milwaukee after a man he'd had an affair with two decades earlier and he had paid to $450,000 to keep it quiet made the relationship public. Weakland wrote: "On the gay issue, the level of fears is so high that the official teaching of the church skates so very close to the edge of a new 'theology of contempt.' "

Those who came to the Chicago symposium brought with them both "hope and frustration," Massingale said: hope that more understanding and acceptance of gays and lesbians was on its way into the church and frustration because that time has not yet arrived.

The priest, who left Marquette last year to teach theology at Fordham University, pointed to a new tone in the church toward gays, a tone he characterized as "cautious, tentative, tense, at times ambiguous and contradictory, and yet nevertheless real."

What underlies the church's "hesitant, resistant and even hostile stance" toward justice for lesbians and gays, the theologian said, is its fear that legislation protecting the rights of homosexual persons would also "lead to social approval of forbidden and immoral sexual behaviors."

The more operative concern, Massingale added, is that such legislation would bring on greater visibility of homosexual persons who would be negative models for youth.

The situation leaves the church in an often contradictory corridor or "open closet," Massingale said, one in which gays "are to be accepted sensitively and compassionately, as long as there is little or no public acknowledgment of their sexual identity,' lifestyle' or 'culture.' "

It was public visibility that cost Colleen Simon her job as a food pantry coordinator at St. Francis Xavier parish in Kansas City, Missouri, in May 2014. The Kansas City Star's 816 Magazine had inadvertently publicized Simon's marriage to the Rev. Donna Simon, a Lutheran minister, even though neither woman had talked of her marriage to the paper when it was reporting on neighborhood improvements.

Simon told a workshop at the symposium that St. Francis' Jesuit pastor was fully aware that she was a lesbian living in an avowed marriage with her lesbian wife. She said both the pastor and the priest who succeeded him assured her that her marriage would not affect her job security. Simon said her wife did not come to the parish; she kept no photos of them as a couple in her office and never did anything to publicize their marriage.

When dismissed, she chose to sue the Diocese of Kansas City-St. Joseph, Missouri. Simon reached a settlement for fraudulent inducement in February 2016 but did not get her job back.

Margie Winters knew well what Simon had experienced. In July 2015, she was terminated from her post as director of religious education at Waldron Mercy Academy in Philadelphia, after two parents at the private school complained to the Philadelphia Archdiocese that Waldron Mercy should not hire someone in a same-sex marriage. By then, Winters had held the post eight years.

Winters' eight-year marriage to her wife, Andrea Vettori, was known to school administrators when she applied for the religious education position in 2007. Like Simon, she was told by her employer that her marriage would not be an impediment to her job.

Winters said the greatest challenge for LGBT church workers is that the hierarchy can take away from you "in an instance" your ministry and all the years of dedication you brought to your work. You have no recourse within or without the church. … This is the reality that LGBT church workers live in — a fearful reality that finds no support in the volumes the church has written on worker rights, the dignity of work, the dignity of the human person, the Gospel."

As a fired church worker, Winters can no longer find work in the Catholic arena, she said, not as an educator, campus minister, church musician or director of religious education. "No one will touch me," she said after detailing more than 25 years of having worked in and for the church. Yet her talents in the area of spirituality, retreat work and community outreach "are hard to bring somewhere else," she said, adding that she was still trying "to find a place … where I can do that which I cannot not do."

Despite disclosures of continual dismissals of LGBT church workers, the 300 participants here seemed largely upbeat, recognizing that a majority of Catholics in the pew, and even some in rectories and chanceries, support their drive for equality and fairness in the workplace. Few spoke of abandoning the church; many — like Massingale and others — saw it as their true and much loved, though difficult, home.

Vettori challenged workshop attendees to "stand up" and to "speak up." No longer "will we fire people because of who they are or who they love," she said. Participants learned of the violence that had been done in homophobic countries like Uganda.

The nurse said LGBT persons had to pass the baton that had been handed to them — by "the men and women who have run this race before us" — on to the next generation. "We owe it to the children today who are sitting in our schools and our churches struggling to understand who they are and turning to the church for answers."

Would justice and mercy "kiss for LGBT Catholics"? Probably not soon but undoubtedly in the future, said speaker after speaker at the symposium.

Catholics can clearly see changes in the military, the academic and corporate worlds, even in the Boy Scouts, that portend recognition and acceptance of gays and lesbians, Massingdale said.

Treatment of LGBT persons has become the "litmus test of ethical credibility and moral authority," the theologian said, adding: "The church has no future in the West if it continues its present course."