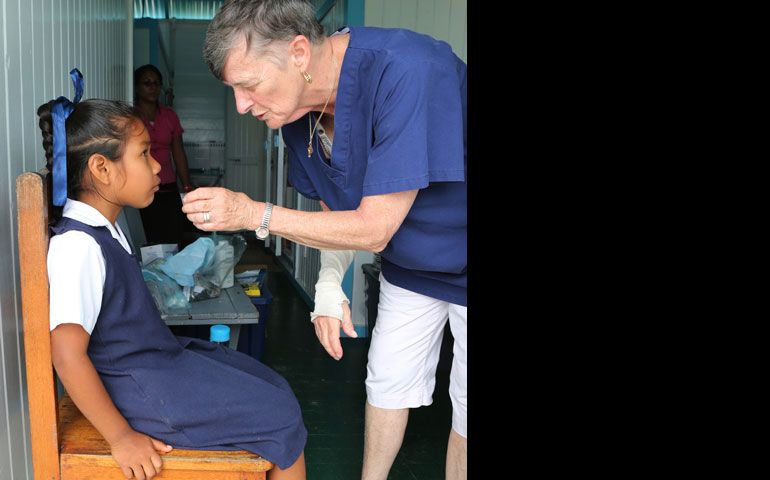 Mercy Sr. Mary McGrory, a registered nurse and psychologist from the Brooklyn, N.Y., diocese, gives a schoolgirl medicine March 16 at a clinic in the village of Wakapoa along the Pomeroon River in Guyana. (CNS/Bob Roller)

Pope Francis has warned us about a system that elevates profits above people. "Today we also have to say 'thou shalt not' to an economy of exclusion and inequality," he wrote in his 2013 apostolic exhortation Evangelii Gaudium. "Such an economy kills." In the case of access to medicines, Francis' dire prediction is proven true thousands of times each day.

It is hard to imagine an injustice more intolerable than a sick person being blocked from receiving the medicine that would alleviate her suffering, or even save her life. As Archbishop Silvano Tomasi, permanent observer of the Holy See to the United Nations has pointed out, the scope of this tragedy is breathtaking: Two billion people lack access to essential medicines, costing 10 million lives each year.

This is not just a problem in the developing world. Here in the U.S., more than 100 leading cancer physicians came together in July to decry the fact that as many as one of every five of their patients don't fill their prescriptions because they simply cannot afford the cost.

Yet even medicine that is priced as high as $1,000 per pill by pharmaceutical corporations usually costs only pennies to manufacture. Generic medicines offer a cost-effective and life-saving alternative. But the U.S. government has aggressively worked to limit access to generics, especially through trade agreements with nations whose citizens struggle to pay monopoly patent prices for medicine.

The most recent and high-profile example of that effort is occurring in the ongoing negotiations over the Trans-Pacific Partnership, a coalition of 12 nations encompassing nearly 40 percent of the global economy. The deal that would become history's largest trade agreement is being negotiated in secret. But multiple leaked texts of the proposed terms reveal that the U.S. Trade Representative is pushing for extended patent protections for medicines and barriers to generic alternatives.

In trade agreements, the devil is in the details. The U.S. has proposed complex terms that would permit new patents for minor revisions of old medicines, a process known as "evergreening." Other U.S.-drafted Trans-Pacific Partnership provisions aim to delay generic drug manufacturers from accessing information needed to allow their entry into the market, a stalling tactic known as data exclusivity.

The U.S. government's policy of elevating patents over patients is not limited to overseas efforts. Well-financed lobbying by the pharmaceutical industry led to Congress blocking the Medicare program from using its significant bargaining power to negotiate the price of drugs. The handcuffs on Medicare have resulted in substantial profits for drug companies while U.S. taxpayers and patients pay far higher medicine prices than those negotiated by the health systems in places like Canada and the United Kingdom.

Pharmaceutical corporations claim that these price tags are a necessary incentive for medical innovation, but the evidence does not support that argument. These companies' investments in research and development are dwarfed by their marketing expenses, which are laser-focused on the health interests of the world's wealthy.

In a system where medicines are treated as engines of profit rather than a public good, television ads for erectile dysfunction pills take priority over research to confront malaria, tuberculosis, and other killers of the poor.

And it turns out that much of the critical research and development of medicines is actually paid for not by private companies but by the U.S. government. When the testing is done and corporations seize patents and set monopoly prices, the government transforms into the chief customer of the products it helped develop. Under this scheme, the pharmaceutical industry enjoys the benefits of socialized risks with privatized profits.

It is little wonder that economists and public health activists increasingly question whether government-issued monopoly patents are appropriate for essential medicines. This is not a new idea: Most nations have long histories of not allowing monopoly markets on necessary drugs. Jonas Salk famously declined to patent the polio vaccine, saying the patent belongs to the people. The creator of the first synthetic malaria vaccine donated the patent to the World Health Organization.

For Catholics, the current barriers to lifesaving medicine are particularly alarming. There is a special relationship between Catholicism and health care, tracing back to Jesus' mission as a healer of the poor. Acting on the mandates of Matthew 25 ("I was sick and you looked after me"), the church and its members provide lifesaving care to millions across the globe.

In keeping with that legacy, the Vatican has specifically called for trade agreements like the Trans-Pacific Partnership to guarantee access to essential medicines.

The U.S. Conference of Catholic Bishops has raised its voice as well, stating, "The Church locates intellectual property rights [in regard to pharmaceuticals] within the broader framework of the common good and believes those rights should be balanced with the needs of the poor."

Front-line Catholic care providers like the Maryknoll Missioners and advocates like NETWORK and Pax Christi USA are prominent members of a coalition insisting that trade agreements prioritize people over profits. "Many of our partners throughout the world witness the impact of harmful trade agreements on the people we serve," NETWORK wrote earlier this year. "We see children who can't receive life-saving medicines because they are too costly."

The good news is that these efforts build on the legacy of one of history's most successful social movements, the drive by HIV-positive persons in the U.S. and the developing world to gain access to life-saving medicines.

In 2000, the high cost of patented antiretroviral drugs created such an imposing barrier that just one of every 1,000 Africans infected with HIV had access to the treatment. But those prices were forced down by a determined movement that brought together politically conservative evangelicals with radical secular activists, and found diverse leaders who ranged from decorated scientists to illiterate patients.

Thanks to that once-unaffordable medicine and the activism that made it available, 15 million HIV-positive people in the developing world are alive today.

But the struggle continues, not just with the Trans-Pacific Partnership but in places like India, which faces U.S.-led threats to the generic drug manufacturing that makes the country the pharmacy of the developing world.

In South Africa, the groundbreaking Fix the Patent Laws campaign includes a broad coalition of patient groups and has earned the passionate support of the country's Catholic bishops. "We strongly appeal to the [South African] Minister of Trade and Industry to take the bold stance of prioritizing the lives of our people over the profit-making interests of powerful pharmaceutical companies," says Bishop Abel Gabuza, chairperson of the Justice and Peace Commission for the Southern African Catholic Bishops' Conference.

Every day that passes without access to medicine is a day of suffering and death for scores of our brothers and sisters, in remote regions and in our hometowns alike. The cure for the barriers to essential medicines is determined activism, and Catholics are called to fill that prescription.

[Fran Quigley teaches and directs the Health and Human Rights Clinic at Indiana University McKinney School of Law in Indianapolis, and is a founding member of Pax Christi Indianapolis.]

Why I'm obsessed with President Trump