Prison chaplain sees focus on the personal as needed in healing 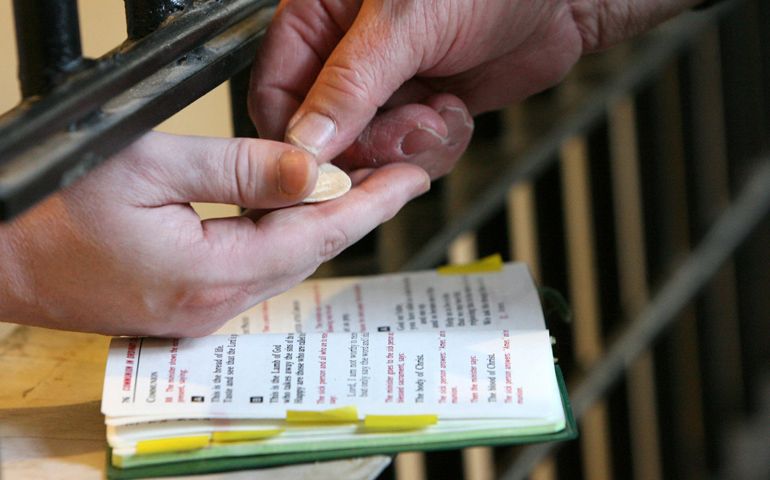 Washington — A couple of pieces of legislation in Congress being backed by Catholic organizations aim for institutional fixes to criminal justice. But a prison chaplain in Indiana also advocates a more personal approach to what's known as restorative justice.

At 77 years old, Fr. David Link has recently made a second (or maybe fifth) career in ministry at six Indiana state prisons. A priest for five years who entered the seminary after his wife of 45 years died, Link was in Washington in early February to talk about his current vocation and avocation.

He spoke at the annual Catholic Social Ministry Gathering, telling of his experiences in prison ministry and promoting his Crime Peace Plan, intended to correct flaws the longtime lawyer sees in the criminal justice system.

As part of the social ministry conference, participants went to Capitol Hill to visit congressional staffers and advocate for a handful of issues.

Among those, participants were asking for support for two bills: the Second Chance Reauthorization Act and the Smarter Sentencing Act. The former would fund state and federal programs that help people who leave prison reintegrate into their communities. The latter would reform mandatory minimum sentencing guidelines to give more options for judges in drug-related cases that don't involve violence.

At a background briefing on the bills, Link put the legislation in the context of what he has learned since his wife dared him, 16 years ago, to give a lecture at a maximum security prison, insisting he'd find it rewarding. His private law practice -- mostly international law, some sports franchises -- had never involved defending people accused of the kind of crimes that might have sent them to state prison, he explained. And state prison inmates weren't the type of people he thought he would connect with.

"I went to prove her wrong," he told Catholic News Service in a Feb. 3 interview. Instead, in "a room with 65 murderers" he "fell in love with these guys."

In the CNS interview and at the social ministry gathering briefing, Link told the stories of prisoners and former prisoners he has come to think of as family. There's the woman who's been out of prison for 20 years and still can't get a job; the man who wound up in prison after trying to get out of a gang and now spends his time warning kids against the path he took; the tough-guy inmate who asked for a hug after the priest told him of a death in his family.

And he talked up his Crime Peace Plan, a 12-step proposal -- 12 steps at the moment, it keeps growing -- to "achieve true justice for victims and victim's families, for those who are accused and convicted and for society at large."

A 2013 book about Link, Camerado, I Give You My Hand by Maura Poston Zagrans, concludes with what were then 10 points of his plan, with a detailed explanation of each. He talks about the misguided efforts of a "war on crime" that has "no exit strategy."

His plan, he wrote, "is not about how to be more lenient or more sympathetic to criminals, nor is it only about saving money." It is, he says, "a populist project," which hinges on treating the vast majority of prisoners as people in need of healing, and shifting the focus of the criminal justice system from punishment to healing, from adversarial to collaborative.

As a volunteer, he co-founded the Center for the Homeless in South Bend, Ind., and served as chairman of the Council of Providers of Services to the Homeless. He also worked on Indiana electoral reform and other projects promoting ethics in law practice and government.

After Barbara Link died in 2003, Bishop Dale Melczek of Gary, Ind., prodded the widower to consider the priesthood as the most effective way of living out what had become his driving passion, prison ministry.

Considering his extensive education and lifetime of experiences, he said Melczek "whittled down the curriculum" for the seminary so that with two-and-a-half years of study, Link was ordained a priest in 2008.

Now one of his goals is to persuade more individual Catholics, as well as parishes and dioceses, to take up the challenges of his Crime Peace Plan, and "truly talk about rehabilitation" as Pope Francis has suggested.

While he recognizes that there are some genuine psychopaths among them, "most people in prison are not bad people," he said. "They're maybe sick people, and we ought to find out how to heal them."

One step toward healing is one-on-one relationships between prisoners and caring people, Link said. He related how a seminary program at Louisiana's Angola penitentiary has created a cadre of prisoners trained to help other inmates seek spiritual comfort. Once one of the nation's most violent prisons, the seminary program is credited with helping change the character of Angola.

Link thinks the seminary experience is a small ray of encouragement in an otherwise bleak criminal justice system. But it is a valuable example, he said of how he believes his work as a chaplain is most successful.

"Sure, I preach at Masses in prisons," he said. "But what turns people around is the one-on-one relationships. That's how the Holy Spirit works."