Religious discuss their visions for Africa 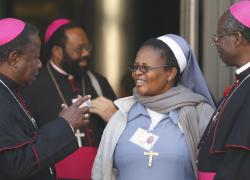 Bishops and a nun talk as they leave a session of the Synod of Bishops for Africa at the Vatican Oct. 8. (CNS/Paul Haring)

As it happens, Oct. 10 is the anniversary of the death of St. Daniel Comboni, a 19th century Italian missionary who spent much of his life in Sudan. Among other claims to fame, Comboni was probably the source of more epigrammatic one-liners about the church's mission in Africa than any other single Catholic figure, living or dead.

Memorable Comboni-isms include, "Either Africa or death," a classic expression of his missionary drive; "Save Africa through Africa," an early formula for the transition to self-reliance; and his famous sentiment upon approaching his death in 1881, "I wish I had a thousand lives to give for Africa."

The coincidence that Comboni's dying day falls smack in the middle of the Synod for Africa offers a reminder that no force within the Catholic church, either historically or in the present, has invested a greater share of its own blood, toil, tears and sweat on behalf of Africa than the church's missionary orders. That legacy makes this morning's seminar on the Synod for Africa organized by Sedos, an acronym for "Service of Documentation and Study for Global Mission," a consortium of religious orders in Rome, well worth noting.

The Synod of Bishops for Africa is meeting Oct. 4-25 in Rome.

Saturday morning's event took place at the headquarters of the Christian Brothers on Rome's Via Aurelia, where roughly 100 religious men and women braved an early thunderstorm to hear two of their own speak about the prophetic role of the Catholic church in Africa:

Both urged the Catholic church to play a more "prophetic" role in Africa, though they offered slightly different perspectives on what that role might look like.

O'Reilly distinguished two kinds of "prophetic witness," the first being willingness to suffer and, if necessary, to die on behalf of the faith and the local community. He cited the example of Archbishop Michael Kpakala Francis of Liberia, now almost 74.

"He's the one who, since the beginning of Liberia's trouble in 1980, has been the voice of those who refused to be put down by the various dictators," O'Reilly said, noting that Liberian President Ellen Johnson Sirleaf has referred to Francis as "the voice of the nation."

In a cruel twist of fate, O'Reilly said, Francis suffered a stroke just as Liberia was on the verge of achieving peace. The stroke left him effectively paralyzed and unable to speak, so that now he simply mutters "yes" and "no."

"He boldly proclaimed the gospel right up until peace came, and then no more," O'Reilly said. In a quite literal sense, Francis "gave everything he had for Africa."

The other sense of "prophetic witness" O'Reilly underscored was what he called the "ministry of advocacy," meaning the engagement of religious orders and the wider church with burning social, political and economic issues – in particular, trying to press Europe and the United States towards more just policies regarding Africa.

"Decisions made in the 'one-third world,' in the northern hemisphere, have an enormous and long-lasting impact on the lives of hundreds of millions of Africans," O'Reilly said. "It's important that the voice of Africa be heard in these policy centers."

Echoing comments he made inside the synod hall, O'Reilly drew attention to the "Africa Faith and Justice Network," a group largely composed of Catholic religious orders that lobbies the U.S. government on behalf of African causes. (The executive director, an American member of the Xavierian Missionaries named Rocco Puopolo, is in Rome for the Synod for Africa, and was at the SEDOS event this morning.)

The AFJN web site can be found at www.afjn.org.

O'Reilly described a visit he made to Benin a few years ago, witnessing the vast cotton belt that also stretches into Togo and Nigeria.

"The conditions faced by the cotton growers are appalling," O'Reilly said. "The children are little more than indentured slaves because of money borrowed by their parents."

O'Reilly said those conditions are at least partly created by the fact that cotton is also grown in the United States and other parts of the developed world, where subsidies and tariffs make it difficult for African crops to compete on a level playing field.

"Our world in Africa is no longer enclosed where we live and work," O'Reilly told his fellow religious. "It's completely touched by the global economic realities around us. We must give prophetic witness to what we know, what we believe to be true and right, because of the wrongs we see with our own eyes."

O'Reilly also called upon religious to promote a more positive image of Africa internationally, as opposed to the near-exclusive focus on poverty, disease and misery that tends to dominate the media. Even the "aid industry" and well-intentioned Western do-gooders sometimes perpetuate those stereotypes, he said – to the degree that "you sometimes wonder whose interests are being served."

"Being prophetic doesn't just mean denouncing things all the time," O'Reilly said. "It can also mean building up."

For her part, Faye argued that the whole concept of prophecy has to be "de-sacralized" in Africa, in part in order to distinguish it from what she called "a religious environment strongly oriented to the supernatural, miracles ... and strong currents of enthusiasm and emotional participation."

Faye said "new religious movements" are proliferating in Africa, "based on revelations that their founders claim to have had, all of whom are called prophets, evangelizers, preachers, or whatever." In that context, she said, "prophecy" can easily be misunderstood in a quasi-magical key.

"Christians are always looking for priest or a sister who can heal, who has the gift of prophecy or the ability to fight Satan," Faye said. "There's never been in Africa such a thirst for holy water, medals, and talismans." For example, she said, there's a thriving market for the oils of St. Simeon, St. Anthony, and St. Michael, which at times reminds one of the global demand for the oil resources of Nigeria and other African nations.

In that context, she said, it's important for the Catholic church not to play down the supernatural -- "if you tell them all this is psychological, they'll never come back to you," Faye said -- but also to ensure that it doesn't become a distraction from works of justice.

Faye offered four areas where she believes the church, beginning with its religious orders, should be engaged:


On the issue of immigration, Faye noted the irony that some European nations are attempting to slow down, or to close off altogether, the flow of African migrants into Europe, at the same historical moment when a new wave of Chinese immigrants is washing across Africa – some to work, others to buy up African resources on the cheap.

Looking around, Faye said, she sometimes wonders "whether Africa will become a Chinese land."

Faye ended by expressing what she described as a "deep conviction": "The church in Africa will be influenced not only by what's said in the synod by the pope, cardinals, bishops, priests, and other synod fathers," she said, "but also by what we [religious] will say right here and now, by what we've started."

That line was greeted by a strong volley of applause.

On US-Mexico border, there's danger of growing accustomed to injustice

Global Catholic peace group: UN, not US, needed in Syria