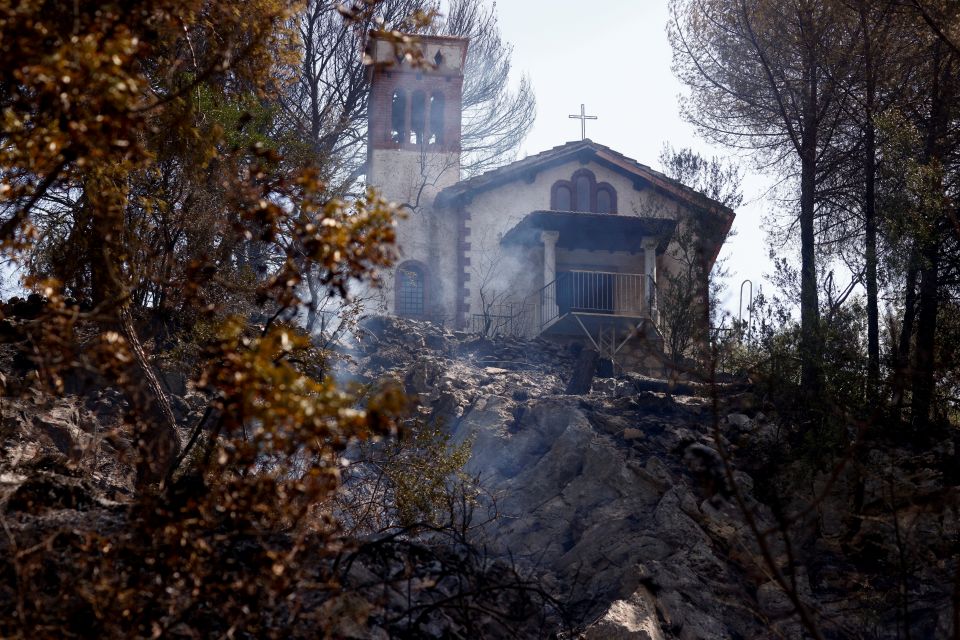 Burned vegetation is pictured near a church at the Monte Catillo nature reserve in Tivoli, Italy, Aug. 13, 2021. Locals were evacuated from small communities near Rome when a wildfire broke out as the Italian capital faced temperatures of around 99 degrees Fahrenheit. (CNS photo/Guglielmo Mangiapane, Reuters)

Leaders from the world's 20 largest economies are facing "make-or-break" decisions that can boost health care, reduce poverty and address the impact of climate change in developing nations when they meet in October in Italy, said the executive director of an alliance of faith-based development and debt relief advocacy organizations.

The questions facing the Group of 20 nations, or G-20, range from charting a path to ease the debt burden of poor countries to ensuring more equitable distribution of vaccines in response to the coronavirus pandemic, said Eric LeCompte, executive director of Washington-based Jubilee USA.

The key to recovery from the pandemic will be ensuring that decision-makers are accountable to follow through on what they say they are going to do, LeCompte explained during an Aug. 24 webinar, "Poverty and COVID-19: Challenges and Solutions," sponsored by Georgetown University's Berkley Center for Religion, Peace and World Affairs.

LeCompte credited a United States plan to donate 500 million vaccines worldwide as a significant step toward the global economic recovery from the pandemic.

"Countries are going to be able to use this for health care, to prevent crisis, to get people back into jobs," LeCompte said.

At the same time, $280 billion in SDRs became available to the wealthiest nations, the Group of Seven, or G-7.

In response, LeCompte called on the more than 260 religious, environmental and labor groups that his organization pulled together in advocating for SDRs to urge the richest nations to donate "currency they don't need" to developing countries.

"Countries are going to be able to use this for health care, to prevent crisis, to get people back into jobs," LeCompte said.

At the same time, $280 billion in SDRs became available to the wealthiest nations, the Group of Seven, or G-7.

In response, LeCompte called on the more than 260 religious, environmental and labor groups that his organization pulled together in advocating for SDRs to urge the richest nations to donate "currency they don't need" to developing countries.

Other webinar participants identified additional steps they consider necessary for developing nations to climb out of the economic morass that the pandemic has compounded.

She acknowledged that the pandemic has led to setbacks on gains in reducing global poverty, in part because local needs are not being heard or addressed.

"We're behind in all of those commitments," Laursen Muth said. "As we build back better, there really needs to be an intentional focus in not just the specific sectoral needs, the health, nutrition, agriculture ... but also real investment in accountability mechanisms that really show how power is being shifted, how leadership is being shifted."

In attempting to understand the changes worldwide, the U.S. Agency for International Development has committed to hearing from faith-based organizations worldwide in efforts to help people overcome poverty, illness and inadequate education, said Adam Phillips, director of the agency's Center for Faith-Based and Neighborhood Partnerships.

The pandemic has posed greater challenges to the world, including a rising income gap that has pushed more people into extreme poverty, Phillips said. An estimated 119 million to 124 million people now earn less than $2 a day and Phillips said USAID is working to reduce overall poverty to 7% of the global population by 2030, he said.

Phillips pointed to efforts that are underway to improve child protection and strengthen families after about 1.5 million children worldwide have lost a parent or caregiver to COVID-19. "We expect this will affect families for years to come," he said.

In response, Phillips explained that his office is crafting an interfaith engagement policy, the first of its kind for the agency, that will ensure that USAID works with individuals and local organizations to create long-term solutions.

In advance of the Rome summit, the G-20 Interfaith Forum convenes Sept. 12-14 in Bologna, Italy. Phillips said it will be an opportunity for him to hear directly from local faith leaders about the key issues that will face G-20 leaders six weeks later.

LeCompte acknowledged that the work facing his organization and others is daunting, but that he has hope the world will respond to the needs of the poorest people as long as their voices are heard.

He also expects the next three to five years will be crucial to the world economy and expressed hope that the recent achievements within the G-20 will carry over into October.

Climate action gets smaller, one oasis at a time

Overcoming church’s negative past in Spain

Editorial: Path of destruction in Iraq began in 1991