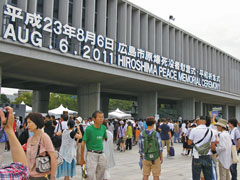 HIROSHIMA, JAPAN -- The air seemed still as a large iron bell was struck once, then again, then six more times, totaling eight. Each sound was allowed to drift and echo through the crowd, which numbered some 50,000. The clock read 8:15 a.m. -- 66 years to the minute from humankind’s first dropping of an atomic bomb with intent to kill.

Gathering from around the world, people came here Aug. 6 to commemorate the anniversary with a solemn dedication to recalling the names of the more than 200,000 killed in the 1945 bombing.

Representatives from more than 60 countries, including the United States, participated in the commemoration.

Following a symbolic offering of water meant to appease the souls of those who died crying for one last drink as their city lay in ruins, city officials released doves as symbols of peace. Japan’s prime minister and a representative of the United Nations’ secretary-general gave speeches calling for worldwide consideration of the lessons from the atomic bomb’s now few living survivors, known in Japanese as hibakusha.

With the ceremony coming nearly five months to the day since a March 11 tsunami caused a nuclear meltdown at Japan’s Fukushima Daiichi power plant, speakers and attendees couldn’t help but raise new questions about how Japan’s nuclear past will relate to its nuclear future.

In his remarks, Prime Minister Naoto Kan told the crowd that the country would “deeply reflect over the conventional belief that nuclear energy is safe.” Many members of the crowd wore buttons with the words “Change to natural energy,” and leading up to the Aug. 6 event, several religious groups had held public prayer ceremonies calling for abolition of all nuclear technologies.

Immediately following the commemoration ceremony, a group of several hundred activists gathered outside Hiroshima’s Peace Memorial Museum to call for the complete closure of Japan’s 54 nuclear power plants. Presenting an alternative statement to Kan’s, they said: “We promise to reject fissile material, regardless of whether it is packaged as ‘nuclear fuel’ or ‘nuclear weapon.’ ”

Masae Yuasa, a professor of international relations at Hiroshima City University who was part of a crowd supporting the activists outside the museum, said their protest, while small, represents an inner struggle among the Japanese people, especially those who survived the atomic blast.

“For the past 60 years many hibakusha dreamed of the peaceful use of nuclear power, so that their sacrifices could have meant something,” Yuasa said. “We had to find meaning. The only possible meaning is that our enemy, nuclear technology, can be used as progress for human beings.”

But now, Yuasa said, interviews she has conducted for a research project on atomic bombing survivors have revealed fear that they no longer may be “just victims.” They are saying that if Japanese nuclear energy plants cause pain or death, they could also be perpetrators.

The Catholic church in Japan has struck a similar chord. The Hiroshima diocese hosted an Aug. 5 symposium titled “No More Hiroshimas, No More Fukushimas.” It focused on the struggles of both the atomic bomb survivors and those who have faced the brunt of the fallout from the Fukushima accident.

In an August letter directed to all the Japanese faithful, Bishop Paul Otsuka of Kyoto wrote that Japan -- “the only country in the world to have been attacked with atomic weapons” -- now “stands in danger of becoming a country fundamentally damaged because of atomic energy generation.”

He is not alone in his thinking. In recent interviews in four Japanese cities, it seemed many Japanese have been pondering the 1945 Hiroshima and Nagasaki nuclear attacks and the 2011 Fukushima nuclear meltdowns, tying them together while trying to discern their broader meanings and messages, not only for the Japanese people, but for the wider human family as well.

It was on March 11 that an earthquake struck off the coast of Japan, setting off a tsunami that rolled through Fukushima, disabling the plant, causing meltdowns in several nuclear generators, and sending radiation into the air and into the sea. The meltdown and its consequences, including ongoing energy shortages in Tokyo, have dominated news coverage in the country for months.

The Yomiuri Shimbun, a Tokyo-based daily, reported in late July that radiation around the damaged Fukushima plant is still exceeding expectations -- reaching more than one and a half times the annual government-accepted limits of radiation at nuclear sites. That was followed by news Aug. 4 that several pipes at the plant are actually at levels at least five times the limit.

More concerns were raised the following day when the paper reported that the government agency responsible for ensuring safe operation at nuclear sites had on several occasions from 2007 to 2009 stacked local symposiums on proposed new nuclear projects with experts favorable to their construction.

The Japanese government’s apparent inability to keep the crisis at the Fukushima plant contained has caused the head of one of Japan’s most respected left-leaning think tanks to ask if the news reaching citizens is only the tip of the iceberg.

“We do not know what is actually happening now at the Fukushima reactor site,” said Hibiki Yamaguchi during in an interview at his Tokyo office as director of Japan’s People’s Plan Study Group, a coalition of Asian activists and intellectuals known for its highly-regarded quarterly report, Japonesia, which focuses on Asian political issues.

Saying the Japanese government and the Tokyo Electric Power Company, which manages the Fukushima site, “seem to be trying to conceal information from us,” Yamaguchi said, “We just don’t know the true nature of the dire situation at the site.”

With Japan’s 54 nuclear reactors providing more than 30 percent of its energy consumption, Yamaguchi and others are starting to raise questions about what a post-nuclear society might look like, and what it would mean for the Japanese way of life. Japanese Catholic leaders are among those asking fresh questions.

In his August letter, Bishop Otsuka asked all Japanese citizens to “discern whether atomic energy, which threatens mankind and the environment, comes within the acceptable limits of our legitimate use of science and technology.”

During an NCR interview, Bishop Otsuka also said that discernment must include consideration for a new, “simple lifestyle.”

“We have to completely change how we think about how we use and produce energy,” the bishop said. “We need balance. As human beings, we need energy. But it is always more and more, more and more. For now, nuclear power is a good solution for energy. But we learned from the accident that this is very dangerous. So this is a chance to fundamentally alter humankind’s attitude toward power.”

Citing the example of the Amish in the U.S., which he called “rather extreme,” Bishop Otsuka said Japanese must consider such examples as a symbol “that a new type of lifestyle is possible.”

“We cannot force people to live that lifestyle, but we have to acknowledge that there should be limits,” he said.

Ai Otsuka and Yoshida Masaki, two young women running self-sufficient farms with their husbands and children in areas just south and north of the Fukushima site, seem to highlight the bishop’s point, and give a certain irony to the damage caused by the plant.

Speaking at the Hiroshima diocese’s Aug. 5 symposium, both women explained how they had moved to the country area about 150 miles north of Tokyo to embrace a life that, in Ai Otsuka’s words, would “allow me to grow my own vegetables, and live with my two children simply.”

Recognizing the possible danger from an accident at the nuclear plant, Otsuka and Masaki explained that they had formed a group pushing for its closure seven months before the March earthquake. Called Fukushima Hyro-action (“Action to Close the Fukushima Nuclear Power Plant”) and composed of local citizens, the group had been calling for the plant to be closed by the 40th anniversary of its commissioning: March 26, 2011, just 15 days after the fateful earthquake and tsunami.

Instead, Ai Otsuka, who has no relation to the bishop, said her family was “completely devastated” when radiation fears forced them to abandon their home and its small farm located about 14 miles south of the Fukushima site.

Ironically, people who live near nuclear plants, while facing the greatest dangers from possible accidents, often do not benefit from the electricity generated. Instead much of it is intended for bigger cities, such as Tokyo.

Regardless of the questions surrounding Japan’s nuclear future, much of the focus of Hiroshima’s commemorations remained on the city’s hibakusha, and what the experiences of their lives may offer in lessons for future generations.

At the Hiroshima diocese’s symposium Aug. 5, Yasko Yamaguchi, who was 8 years old when the bomb struck, explained how students at her school, located just 2.5 miles from the center of the blast, were thrown about as the walls and ceilings collapsed.

Even though the children were far enough away from the city to survive the initial explosion, said Yasko Yamaguchi (who has no relation to the People’s Plan director), some died of starvation while waiting for supplies of food to arrive.

“The blast took everything away from us,” the 74-year-old said slowly, with tears welling in her eyes. “I lost many of my friends.”

She added, “We must share this experience with the world, and especially future generations, so they will know how sad, how miserable atomic bombing is.”

At a panel discussion following the city’s commemoration ceremony Aug. 6, several more survivors shared their stories, including Sumiko Hirozawa, who was 17 at the time of the bombing. Now 82, Hirozawa recounted seeing the B-29 bomber in the sky from the countryside as it flew toward the city.

“It brought such horror,” she said softly. “Such horror. Such devastation. Nothing was left.”

And still, even in their intense focus on the horrors of nuclear war, this unique group of war survivors couldn’t escape some discussion of nuclear energy.

Explaining that many in Japan thought nuclear power was “perfectly safe” before the March earthquake, Shoso Hirai, who was 16 at the time of the Hiroshima bombing, said at the Aug. 6 event that the meltdown at the nuclear plant “was a shock felt all over the world.”

“Both atomic bombs and nuclear power plants are developed from the same technologies,” he continued. “And it is very dangerous.”

Pausing to look up from his prepared speech, Hirai told how the day after the bombing he had entered the city center to look for his brother, whose remains were never found.

Before continuing in slightly broken English, Hirai concluded: “I believe total nuclear abolition is a wish not only for the hibakusha, but for people all over the world. Even it may seem a distant wish, we cannot give up our struggle.

“We cannot let others go searching for their loved ones, never to find them. We must take action to make this a safer world.”