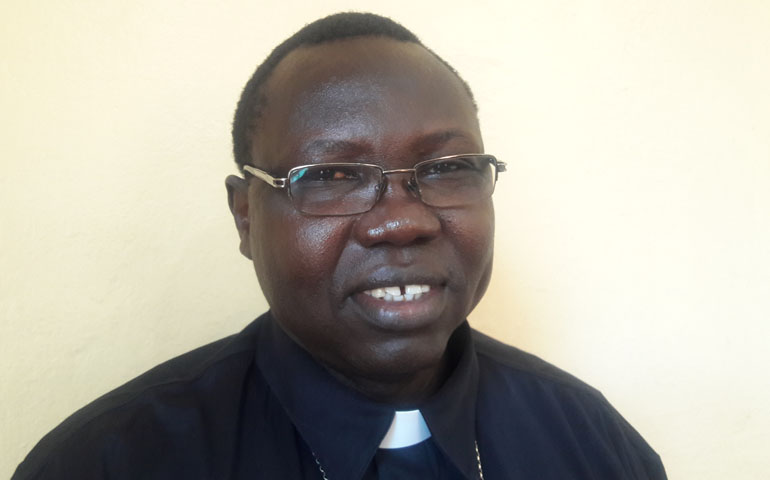 Bishop Santo Loku Pio Doggale is not a man to mince words and he didn't mince words earlier this year when he discussed South Sudan's descent into a worsening, seemingly never-ending civil war.

"The government is the orchestrator of the war, and the people are suffering as a result," he told NCR from his office in the capital of Juba in late May, citing numerous examples of the afflictions South Sudanese are experiencing: rape, looting and displacement.

"They are being brutally mistreated," the auxiliary bishop of the capital of Juba said of those who are the victims of violence — victims who have, at the moment, "no resource to justice. It's a big mess."

He acknowledges that his critics — in the government and even some, privately, within the church — wonder if his criticisms are fair, smart or wise.

But Doggale brushes aside those criticisms, saying, "I'm not afraid."

"My life doesn't matter. I've suffered, too. I've lost members of my family. But when brutality is the order of the day, someone has to speak up, especially when you see that the flock is living in fear. This makes me angry."

Doggale's outspoken stance represents one wing of the church — a faction that believes that the church needs to be firm in its prophetic stance not only for the larger cause of peace in South Sudan but also in calling out the current government for policies and actions some believe are the cause of the current war.

But in a predominately impoverished, Christian nation where the church has an outsized role in providing education, social services and even basic necessities like food, the church's place in society also has a practical side.

"The Catholic Church has a strong, strong footprint here," said Fr. Pau Vidal, a Jesuit priest and a project director for Jesuit Refugee Service in the northern city of Maban. Another humanitarian agrees. "The churches have credibility here in South Sudan," said Jerry Farrell, the country representative in South Sudan for Catholic Relief Services. "In fact, they're the only institutions that do have credibility, as they touch on so many parts of life: spirituality, health care, housing, education, food."

Financial figures about the church's role are hard to come by, but Catholic Relief Services alone has provided assistance of some sort to more than 1 million South Sudanese, the agency said, and works in partnership with local dioceses, parishes and religious congregations of both women and men.

Famine remains a serious problem and 6 million of country's 12 million people face some kind of food insecurity — the lack of access to food — according to the Food and Agriculture Organization of the United Nations. Church-based groups have initiated programs to improve the humanitarian situation within the country. As just one example, the Society of Daughters of Mary Immaculate, or DMI Sisters, is working on local initiatives to assist small communities in agricultural projects. 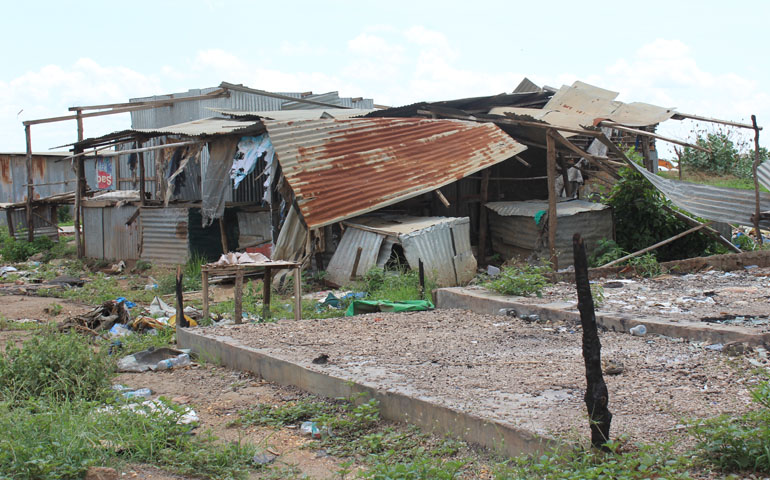 In a country suffering from so much trauma, the spiritual dimensions of the church's work should not be minimized. The Vatican's announcement in late May that Pope Francis was postponing a visit to the country tentatively scheduled for later this year because of security concerns was greeted with great disappointment. Some said they were shattered.

Numerous clerics and Catholic sisters said the expected visit would have given them and local parishes a needed boost amid so much bad news in a war-plagued country with a worsening economy.

Catholics in South Sudan will likely welcome the news earlier this week that the pope's visit may be back on; in an interview with NCR in Rome, the head of the Sudanese bishops' conference, Bishop Eduardo Hiiboro Kussala, said there may be reason to believe that the Vatican is giving a visit to South Sudan another look.

After the Vatican announced the postponement of the pontiff's visit, it also announced more than $500,000 in assistance to church-based humanitarian projects in South Sudan, including a school training program run by Solidarity with South Sudan; a farming project run by the international Catholic network Caritas, and two hospitals operated by the Comboni Missionary Sisters.

Grave problems persist in the country and whether stated in public, like Doggale, or in private, among numerous Catholics, they revolve around the current government in power.

The criticisms center on several fronts — that the government has either not been able to control factions of the government military forces known as the Sudan People's Liberation Army, which is predominately made of members of the ethnic or tribal group known as the Dinkas, or has been purposely targeting non-Dinkas and populations the government believes oppose it.

Ethnic tensions have been put to use for political purposes, as Human Rights Watch said in its report on the ongoing conflict, noting that it began in 2013 when "soldiers loyal to President Salva Kiir, a Dinka, and those loyal to former Vice President Riek Machar, a Nuer, fought in the capital following months of growing political tensions."

In its 2017 report, Human Rights Watch said that government troops have "killed, raped, and tortured civilians as well as destroying and pillaging civilian property during counterinsurgency operations in the southern and western parts of the country," while acknowledging that both sides of the conflict "have committed abuses against civilians in and around Juba and other areas." Some 2.4 million South Sudanese have been displaced, Human Rights Watch noted. 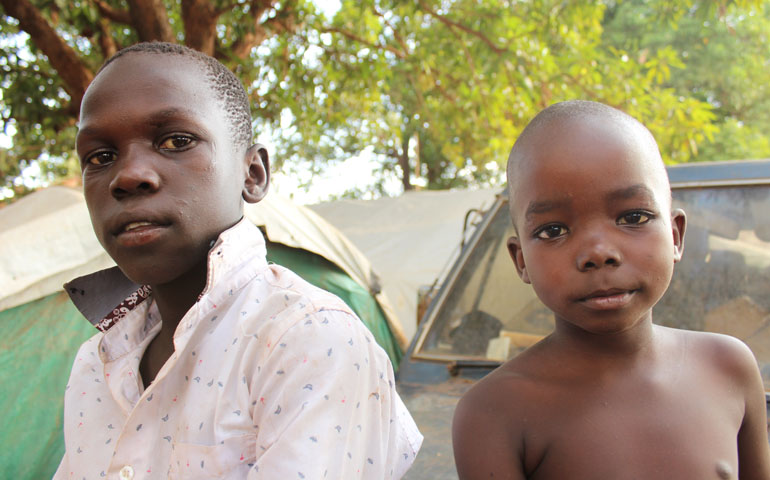 Some within the church, such as Fr. Moses Peter, a diocesan coordinator for Caritas in the city of Wau — which has faced a serious crisis, with thousands seeking refuge on the ground of the Catholic cathedral there — are, like Doggale, government critics. Peter said, "Nobody trusts the SPLA," and notes that the government has accused the Catholic Church of being "pro-rebel," a charge he strongly rejects. (President Kiir is a Roman Catholic.)

Yet the prophetic often mixes with the practical — Peter says in his humanitarian work, he works cordially with local officials among the thousands displaced in Wau by the conflict. And the church has a long history in Wau of involvement with peace efforts among all parties and factions to help diffuse local tensions.

Everyone in the church is tired of the conflict and is eager to resume some sense of hope and nation-building that ushered in the creation of the world's newest nation after it gained independence from Sudan in 2011. Many relish memories from that time, their first taste of independence, coming after years of war.

"It was a beautiful moment — an independent people felt they could start afresh," said Vidal. "But the [current] war has worsened the situation so much and there is no sense of nation unity now."

Some say there is still enough political and humanitarian space to do needed pastoral work.

"It is certainly better now than in the 1960s when our people were under Arab rule," Sr. Mary Faida, a member of the Sacred Heart Sisters, a South Sudanese congregation, said of life under the rule of neighboring Sudan, which is predominately Muslim. She said the work now of the church and of religious congregations — whether in education or in health care — is "giving hope to the people."

Yet there are still deep worries about the church and its future. Interviewed in May, Doggale said even with all of its problems, he did not believe that the national government was engaging in systematic harassment of the church. But he did say some government officials were probably behind threats to individuals, including him.

"Is it government policy? No," he said, but added he had received several threatening anonymous calls recently, including one in which a man told him, "Your days are numbered."

There have been other troubling signs, too: a group of government troops threatened employees of a church bookstore in Juba in February of this year and took books off of the shelves they declared were written by government critics.

Since May, the bishop has become increasingly pessimistic. South Sudan-based Radio Tamazuj reported in July that Doggale called the current government's national dialogue strategy "a waste of time." He said, "The problem is political and it has to be solved by the political leaders," including Kiir and Machar.

"The ordinary citizens have not yet created any problem, that's why our faithful citizens are able to stay for three months without salaries and they don't even demonstrate. They still go to work, you will never see this in any country in the world," he said. 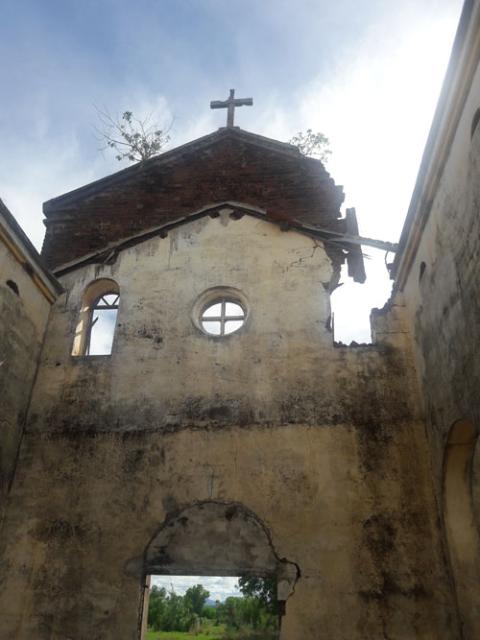 Before South Sudan won its independence in 2011, the area near the Kit River was the site of intense fighting between South Sudanese rebels and Sudanese troops. A bombed-out church serves as a sober reminder of the country's legacy of war. (Chris Herlinger)

In emails earlier this month, Doggale told NCR that the current situation is "getting worse day by day. People are living in the uncertainty, rampant insecurity, hunger and diseases. In one word. It is limbo."

In a later email, the bishop said, "The intimidation is of all South Sudanese by their own government. The ruling elite don't care who you are, they just do what they want and when they want it." He said there is there is no rule of law and repeated his belief that the country is in limbo.

"In South Sudan everybody is under intimidation, and so fear is instilled into people. It is the church that tries to give some voice, and so they (the government) are not comfortable about that and that is why they also get frustrated when the voice of the church continues in many ways to be aloud and strong on the suffering of the people."

Others who agree with the bishop say privately the church has to be careful — that it is dealing now with what some call a military dictatorship and that the church is clearly in the government's crosshairs.

"This is not a joke, what is happening now," said one member of a religious order, who said the Kiir government has made a number of false allegations about the church, including that it has called "for regime change."

"The stakes are now going up for the church," the member said.

"The blood of the tribe is thicker than the water of Baptism," Doggale said. "Our government is Catholic. They read the Bible. They go to church. But how much do they put into practice?"

Others also point out that in such an intense, confusing environment it is probably no surprise that four dioceses in the country are without bishops now.

"The Catholic Church is trying to finds its way now. But in keeping quiet, and not speaking out against human rights, we are taking sides and protecting our own projects," said one cleric who did not want to be identified.

"How much injustice will we continue to see? There is so much that the religious here are witnessing," the cleric said. "When you speak out [it is assumed], you are speaking out against the government. How can you do that in a way that is constructive?"