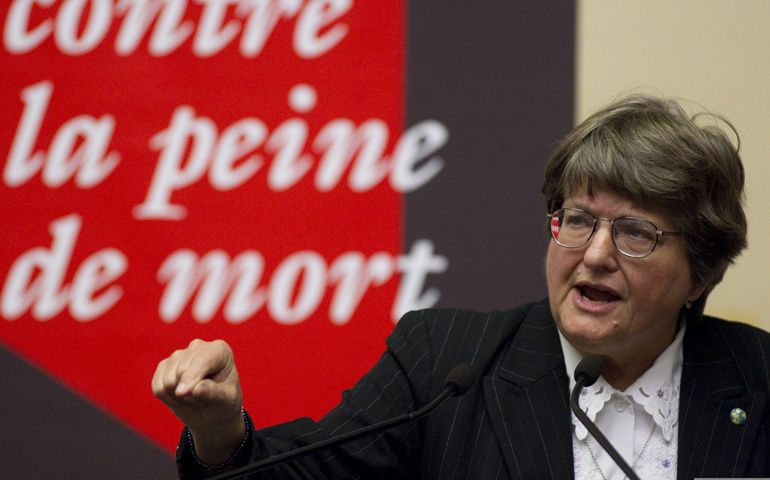 Boston — Sr. Helen Prejean, the Catholic nun and anti-death-penalty activist whose story came to fame with the 1995 film "Dead Man Walking," took the stand on Monday in the penalty phase of convicted Boston Marathon bomber Dzhokhar Tsarnaev's trial. She said he is "genuinely sorry for what he did" and told her how he felt about the suffering he caused to the bombing's victims.

"He said it emphatically," Prejean said. "He said no one deserves to suffer like they did."

She added, "I had every reason to think he was taking it in and he was genuinely sorry for what he did."

Prejean said she had met with Tsarnaev five times since early March and that he "kind of lowered his eyes" when he spoke about the victims. His "face registered" what he was saying. She interpreted his remorseful sentiment "as absolutely sincere," she said.

Prejean said she talked with Tsarnaev about both their faiths: his Islam and her Catholicism.

"I talked about how in the Catholic church we have become more and more opposed to the death penalty," she said, drawing an objection from the prosecution.

Conrad asked Prejean what she heard in Tsarnaev's voice she he spoke about the victims' suffering.

Prejean, who has been a nun since 1957, said she started meeting with Tsarnaev in early March at the invitation of his defense team. She had met with him as recently as a few days ago, she said.

Conrad asked her about her impressions of Tsarnaev when she first met him.

"I walked in the room, I looked at his face and said, 'Oh my God, he's so young!' " she said. Throughout its case, the defense team emphasized Tsarnaev's youth and impressionability.

In the gallery, bombing victims shook their heads and looked around incredulously when Prejean said Tsarnaev was remorseful.

On cross-examination, Assistant U.S. Attorney William Weinreb listed Prejean's credentials as an activist. She confirmed that she opposes the death penalty, makes speeches against it and campaigns to have the practice abolished.

After Prejean left the stand, the defense rested its case.

Her brief testimony, taking place just before 10 a.m. Monday, ended a series of negotiations by the two sides over whether she would be allowed to appear before the jury. Prejean is regarded as an expert on remorse, which can be a mitigating factor for a jury to consider in death penalty cases.

Tsarnaev's defense team is trying to convince the jury that he should be sentenced to life in prison with no chance of parole instead of to execution.

The jury convicted Tsarnaev, 21, on April 8 of all 30 counts related to the attack that killed three people and injured more than 260.

Justice | Sr. Helen Prejean: Tsarnaev 'genuinely sorry for what he did'

Pope Francis takes a dim view of the death penalty, but not all Catholics are convinced