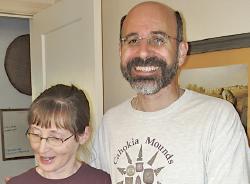 Here’s the challenge: When you’re enrolling your child in Catholic school for the coming year, or perhaps for parish religious education classes, take a moment to look through the curriculum to see how many classes are spent on the topic of Gospel nonviolence.

For that matter, spend a moment and think back over your own education if you went to a Catholic high school or college. Was much time given over to exploring the nonviolent Christ or the implications of his preaching on love of enemies?

Peg Burns Kerbawy of Kansas City, Mo., has a hunch that you won’t find much material on those subjects. Of course, it’s more than a hunch. Apart from the occasional teacher who might want to emphasize the matter, nonviolence and peacemaking are subjects easily sidelined as formal areas of study in Catholic education. They move into deep and difficult waters quickly, running up against societal presumptions about power and the use of deadly force.

Burns Kerbawy and her husband, Greg Kerbawy, are Montessori-trained teachers, and they believe that children can at an early age begin learning the “golden thread” of nonviolence that runs through Christian history. That’s why she has taken years to develop a Montessori-style curriculum, with a world of “materials” so essential to that style of teaching.

In the dining room of her Kansas City home, she gets down on the floor and rolls out a yellow fabric timeline, marked off in years over several centuries. She begins building the story with lots of other materials that symbolize first-century life, the Roman Empire and early Christians -- the stuff, in miniature, of emperors and martyrs, of powerful armies and amassed wealth and the contrasting Christian communities of shared wealth and Eucharist.

It is the “foundational story,” the same approach that is taken in an academic Montessori setting. Burns Kerbawy begins explaining how the teaching is approached in a Montessori atrium, or space where the lesson takes place. “I would light a candle with the children gathered,” she said, and she began to narrate: “The ways of God are unchanging. They are one continuing act of love. It’s not as though love flowed from God -- love is God and God is love. And God loved so much that God wanted to share love and so God created human beings. And when God realized the human was in darkness, he gave us a son, a gift, a Word that would bring us out of the darkness and the Word was Jesus, the son of God.”

And thus begins the foundational story, always told, never read. “And then we go on to tell the story of Jesus, putting in the nonviolence that’s usually edited out,” she said.

The emphasis on nonviolence begins with Jesus’ teaching on love for friends and enemies. The difference between that way of existing in the world and the normal markers for success is brought out again in tiny details and models that children can touch and discuss. For instance, it is pointed out that Jesus entered Jerusalem riding a donkey. “He is without any of the garb and accouterments of the conquering military hero,” said Burns Kerbawy. “People at that time understood what riding a donkey meant. It wasn’t the white horse. He told Peter to put down the sword in Gethsemane and he forgave his enemies even on the cross. So we continue the story, putting the nonviolence in.”

The nonviolence, the golden thread that weaves through Christian history to modern times, represents, in her words, “the unbroken connection from God, who is nonviolent love, through Jesus, the apostles and the early Christians.” And so there is a golden thread placed on the timeline next to name cards and biography cards and other items that the children can handle and discuss -- like an empty tomb for Jesus; salt for Mohandas Ghandi, symbolizing his march to the sea to make salt; a garment of rough material for St. Francis of Assisi; a quill pen for Leo Tolstoy.

In all, the curriculum deals with Jesus, Mary and 36 other “nonviolent followers of Jesus.” They range from ancient figures such as early church father Origen; St. Maximillian, a third-century conscientious objector; St. Maximus the Confessor (580-662), father of Byzantine theology in the sixth and seventh centuries; and St. Boniface (680-754), apostle of Germany.

The biographies run through history and include well-knowns, such as Ghandi, Dorothy Day and Mother Teresa, as well as the lesser knowns in the Catholic world, such as the 17th-century founders of the Society of Friends (Quakers), George Fox and Margaret Fell; Lanza Del Vasto (1901-81), founder of the Community of the Ark, a pacifist group in France; and Eberhard and Emmy Arnold, founders of Church Communities International.

One of the figures is Fr. Emmanuel Charles McCarthy, a Melkite priest whose careers included the law, university educator and rector of St. Gregory the Theologian Seminary in Newton, Mass. He is also married (the Melkites are Eastern-rite Catholics, under the authority of the pope, who allow ordination of married men) and the father of 13 children. But paramount among McCarthy’s activities is his persistent preaching and writing about Gospel nonviolence, which he terms “a non-thought” to most Christians.

McCarthy is significant in the timeline because he has been the golden thread of nonviolence that has wound through the lives of Burns Kerbawy and her husband.

In fact, Greg already knew McCarthy when the couple (they’re both natives of Michigan) met in the late 1970s when they were students at Michigan State University. The two were in a class on sociology of the family, and one day as they were leaving the classroom, Greg heard Peg ask the professor about doing a project connected to the Second Vatican Council, the worldwide gathering of bishops during the 1960s. Greg heard the question -- Vatican II being an unusual point of interest in this large secular university -- “and he came running after me,” she said, laughing.

That meeting eventually led to marriage and four children and a lifelong commitment to peacemaking and spreading the word about Christian nonviolence. “I thought he was kind of weird, running out of nowhere because he overheard me talking about Vatican II,” said Burns Kerbawy. But early on, the conversation turned to matters of faith. “We weren’t interested in the status quo. We were not interested in being cultural Catholics,” she said. “We both wanted to live radically.”

Along the way, they studied in Italy with Sofia Cavaletti, who developed the Catechesis of the Good Shepherd, an approach to the religious formation of children that is based on the educational principles of Maria Montessori.

Over the years, the ideas and some of the materials for the curriculum kept accumulating, in cigar boxes and in Burns Kerbawy’s imagination. Finally, it came together in the last four years. The materials, the stories, the booklets of biographies (each written, from four to eight pages, in a clear and straightforward manner for children), and an extensive bibliography on each segment of the curriculum, as a guide to deeper reading and research for teachers and advanced students.

Recently, Burns Kerbawy has traveled to demonstrate the curriculum at several sites that are familiar with the Montessori method and are interested in developing a program on nonviolence.

Catherine Maresca, director of the Christian Family Montessori School in Mount Rainier, Md., a school that uses the approach developed by Cavaletti, is using Burns Kerbawy’s curriculum successfully with children 9 to 12 years old.

“We’re incorporating some of Peg’s work into our catechesis and I feel she has given us a good tool to explore Christian nonviolence,” said Maresca. It is especially valuable, she said, because it is a curriculum that has been worked out over time and developed as it’s been used with children and by someone who understands the Montessori method.

Maresca said she recently met with someone in a nearby Episcopal church “and she’s got kids coming in and working with the stuff based on what Peg has provided.”

In her Kansas City home, Burns Kerbawy completed a brief overview of the curriculum and how it works. It is intended to stretch as a matter of catechesis over a number of years, with different levels of materials allowing students to constantly go deeper into research and study about the ideas and individual figures.

“Children need an answer to evil,” Burns Kerbawy said. “In the course of working with children, we can hear their deep sadness over suffering and what I call evil, even if it’s small things like the pet dies or the dead squirrels in the road, because they know something about the power of evil. They don’t put the word evil to it, but they know darkness.

“So, when I know children have that experience, I think it is important to give them the solution for that, and for Christians that is the Good News. We have the answer to that. All the mysteries of love and mercy and Christ as suffering servant are what we have. These extreme mysteries of death and evil that we know children have a glimpse of connect that mystery of faith and the reality of ‘God is love.’ ”

For more information about the curriculum, contact Burns Kerbawy at pegburns00@gmail.com.

Tom Roberts is NCR editor at large. His e-mail address is troberts@ncronline.org.