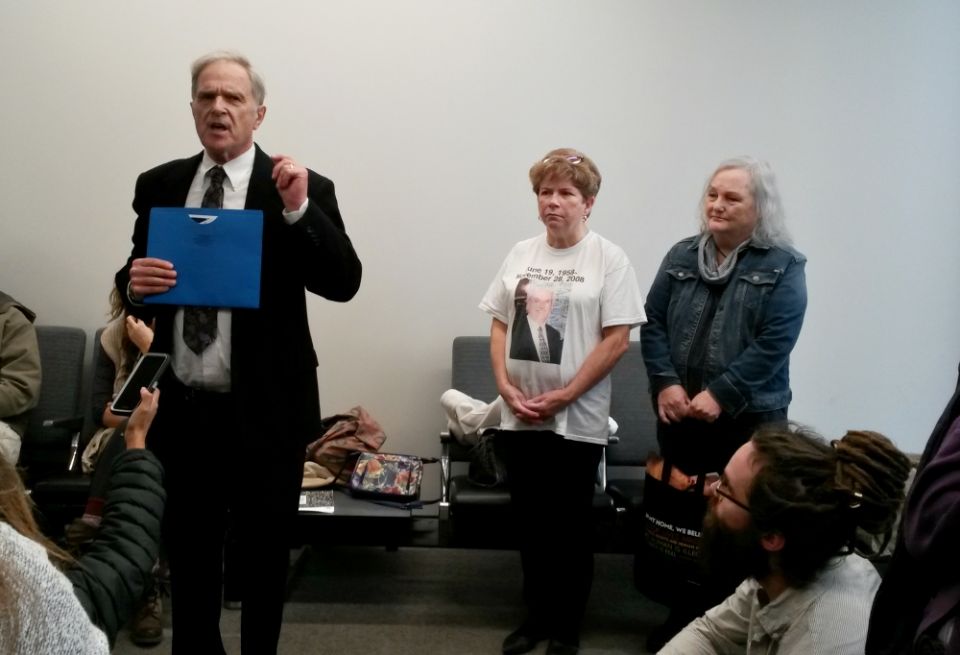 Tom Fox speaks at a gathering in the Kansas City, Missouri, courthouse lobby Dec. 7 ahead of his planned trial for trespassing on the Kansas City National Security Campus. Also pictured are, from left, Debbie Penniston, wearing a memorial T-shirt for her husband; Linda "Lu" Mountenay; and Jordan "Sunny" Hamrick. (NCR photo/Maria Benevento)

Kansas City, Mo. — A planned trial of five protesters who were arrested for trespassing on the property of a weapons producer became an impromptu symposium about the dangers of nuclear weapons manufacturing after a key witness for the prosecution failed to appear in court Dec. 7.

Attorney Henry Stoever; Tom Fox, CEO/president of the National Catholic Reporter; Community of Christ minister Linda "Lu" Mountenay; Jordan "Sunny" Hamrick of Jerusalem Farm in Kansas City, Missouri; and Brian Terrell, a Catholic Worker and national leader of Voices for Creative Nonviolence had been set to go on trial. They had crossed a trespass line onto the Kansas City National Security Campus, as part of the annual Memorial Day protest against nuclear weapons May 28. All but Terrell, who lives in Iowa, are residents of the Kansas City area.

The five were among a group of 65 who marched on May 28 about a mile from the Bannister Federal Complex, a boarded-up site where nonnuclear parts of nuclear weapons were produced from 1949 to 2014, to the National Security Campus for a rally and "die-in." The campus has taken over production of more than 85 percent of the nonnuclear components for U.S. nuclear weapons.

Those who were arrested were released after half an hour and charged with trespassing. They decided to plead not guilty in order to go to trial and increase publicity.

The court's plans changed unexpectedly when the National Nuclear Security Administration official involved in the arrests did not arrive in court at the scheduled time. In light of the witness' absence, the judge dismissed the charges.

Some among the dozens who showed up to support the protesters speculated that traffic tie-ups and road closings resulting from a presidential visit to Kansas City on the same afternoon as the trial may have detained the witness, although it had been mentioned at a gathering of supporters the night before the trial that they had been unable to reach the witness recently.

Stoever, the attorney who also heads PeaceWorks Kansas City, had been granted a waiver to represent both himself and three other defendants at trial, while Terrell chose to represent himself.

Judge Martina Peterson had seemed "very accommodating," when the defendants met with her earlier, Stoever told his supporters the night before the scheduled trial. He and the other defendants all expressed their gratitude that the judge was allowing them to speak at the trial about their motivations for trespassing, a concession that is not always granted.

Since the courtroom was still reserved after the judge dismissed the charges, the would-be defendants took the floor to explain what had motivated them to risk jail time.

For Mountenay, the risks were especially high, both because this was her fourth arrest crossing the line at a weapons base and because she has cancer and was worried about receiving proper chemotherapy treatments in prison.

She told NCR during a gathering in the courthouse lobby ahead of the planned trial that she was motivated by concern for the environment and a desire to "try to make a difference in the possible future" for her grandchildren.

During her testimony, Mountenay unrolled a yards-long "scroll" listing the toxic chemicals in use at the security campus.

Among the audience of Catholic Workers, Jerusalem Farm members, NCR employees, Community of Christ members, Catholic sisters and other supporters were former Bannister employees and their families. Some of them had hoped to testify that those chemicals had harmed workers' health but had heard the judge wasn't planning to allow them to speak.

Debbie Penniston, a Catholic school teacher, says her husband, Bob, died in 2008 at the age of 50 as a result of medical complications resulting from working at the old plant. She told NCR that she attended because the protesters "took the risk of crossing the line; I'm supporting them because I can't [cross myself]. ... I'm here in support of the people who did what I want to do."

She added, "I want [Honeywell] to say there are chemicals on that land ... and they're not telling [the workers] that."

"This is an important issue, weapons of mass destruction, that's not given nearly enough public attention," PeaceWorks member Daniel Karam told NCR. "For this small group of dedicated people to put themselves on the line ... in my estimation, they deserve support."

Drawing public attention to the dangers posed by nuclear weapons production was a major motivation cited by the protesters. Mountenay said her actions often serve as a catalyst for dialogue with acquaintances who ask why she would choose to risk arrest. Many have no idea that the plant even exists, she said.

"We're here to speak for all of creation," Hamrick said ahead of the trial. "Everything is faced with omnicide because of these weapons."

Terrell used similarly dramatic language, asserting that we are "on the verge of extinction" and that those who have been called unrealistic or utopian for supporting nonviolence and care for the Earth are now beginning to look like "hard-nosed realists."

Hamrick said that while he had been looking forward to his chance to explain his motivations to the judge, he was still happy to speak on the issue of nuclear weapons to those gathered. "Right now, we're just pulling on heartstrings," he said, "and that's what we gotta do."

'All the words are not enough'

For Fox, who returned to NCR as CEO/president in October but had been retired as NCR publisher at the time of the Memorial Day action, the arrest was his first in the United States. (He was once jailed for a day in Vietnam after reporting on a protest.)

Fox said that he wrote "scores" of editorials against nuclear weapons during his time at NCR, but passed up opportunities to get arrested protesting them, partially because he didn't want to drag the publication into his action.

"When I left, I felt I'd lost a platform for protest, and so the only other way that I knew that I could make a statement, other than writing about it, was to break the law and show that I really believe in this firmly," he said.

Wanting his grandchildren to remember him "as someone who believed so deeply in this issue that he was willing to be arrested and possibly put into jail for doing it" was another motivation, Fox said, explaining he wanted his children and grandchildren to know that he was "a rebel and did not go along with this madness."

Fox said that he inclines toward the tradition of nonviolence within Catholicism, but pointed out that even under the just war tradition, which allows for use of force in certain cases, nuclear weapons are immoral because they don't distinguish between combatants and civilians.

In their 1983 war and peace pastoral, "The Challenge of Peace: God's Promise and Our Response," the U.S. bishops had offered a conditional acceptance of possessing nuclear weapons for the sake of deterrence, with the understanding that nations were moving toward nuclear disarmament.

But as disarmament has failed to materialize, some church leaders have taken a stronger position against nuclear weapons, with Pope Francis condemning the very possession of them in 2017.

Fox is concerned that the destructive power of nuclear weapons has only increased since the U.S. dropped atomic bombs on the Japanese cities of Hiroshima and Nagasaki during World War II.

Over the years, protesters at the National Security Campus and the now-closed Bannister plant have also drawn attention to the monetary costs of nuclear weapons, as well as the harmful effects of toxins on the workers. A 2017 government report estimates the U.S. will spend $1.2 trillion over the next 30 years to maintain and modernize nuclear weapons.

"My hope is that people learn about it and it gives them encouragement to not give in to accepting this as just the norm," Fox said.

"If it's so wrong and so immoral and so outrageous and so threatening of life that all the words are not enough, that you have to do something more, with your body, to show your protest, then you're called to break the law" in favor of the law of conscience and Catholic teachings, he said.

"I think my grandchildren will remember this probably as much as they'll remember me for anything, and I like that, it gives me hope."

'No more war': Pope continues his teaching on Gospel nonviolence