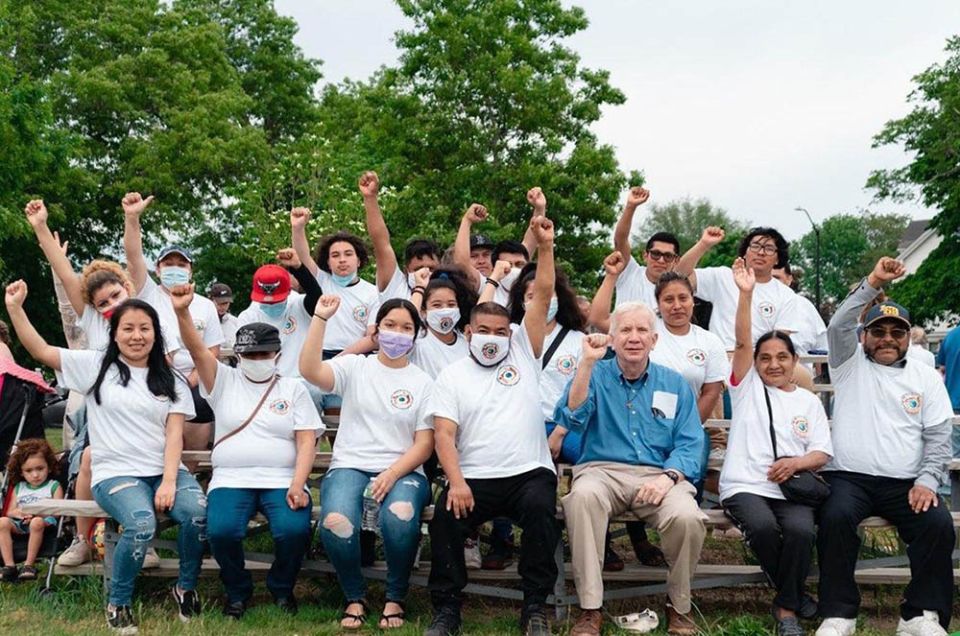 Members of the Centro Comunitario de Trabajadores in New Bedford, Massachusetts, raise their fists in the air in this undated photo. The center, which began with a grant from the Catholic Campaign for Human Development in 2019, has become the go-to place for vulnerable workers and tends to Indigenous communities from Central America who work in the fishing industries. (CNS/Courtesy of Marc Fallon)

A center that began with a grant from the Catholic Campaign for Human Development has become the go-to place in New Bedford, Massachusetts, for essential workers during the pandemic and to speak about sexual harassment in the workplace.

But as the U.S. began shedding light on the importance of essential workers during the pandemic, and openly confronting issues of sexual harassment in the workplace that broke open with the #MeToo movement, the center has lived up to the Catholic Campaign for Human Development's mission to "help low-income people participate in decisions that affect their lives, their families, and communities."

Holy Cross Fr. Marc Fallon, who wrote the grant that first got the center operating, said it's a mission that has paid off in terms of getting a community of disenfranchised workers into one that has found a voice of its own to help its community members and evolving workers' issues.

Back when the center began, it served Central Americans working in local seafood processing, garment and recycling companies, many who were employed through temporary employment agencies, Fallon told Catholic News Service.

Many of the complaints dealt with workers who had grievances but because of an irregular immigration status were reluctant to talk about the violations against them in the workplace.

Initially, efforts focused on telling them about their rights.

"You know, you [the workers] may have been applying for asylum or you may not have all your papers in order, but under the state law you have these rights, " said Fallon. "So, we build on education and then, of course, it takes long time for ... the level of trust."

In 2012, the center obtained tax-exempt status and began employing staff from the ranks of the workers it was helping.

On its website, the center says it "seeks to bring immigrant workers out of the shadows where exploitation and abuse thrive and assist them as they navigate the American legal system. We believe that a healthy community and economy should allow all individuals to access the benefits provided by the law, and that the voices of those who power the economy should have weight in a truly democratic society."

Though the center helps many Spanish-speaking migrants, it's also organized keeping in mind customs and practices, as well as the language, of Indigenous Mayan communities from Central America, which make up a big part of the worker population, Fallon said. In many cases, Spanish is a second language.

Leaders who have emerged from the center have had experiences in their native countries with trade unions, as well as the Catholic Church's social justice ideals, advancing the work of the Catholic Campaign for Human Development, he said.

As the domestic anti-poverty program of the U.S. Catholic bishops, the Catholic Campaign for Human Development says one of its central beliefs is "that those who are directly affected by unjust systems and structures have the best insight into knowing how to change them."

Funding by program has helped migrants at the Centro Comunitario raise the voice of workers as the issues affecting them have changed.

For example, as vaccines against the coronavirus began to be administered to the U.S. population in 2021, one of the center's migrant leaders spoke up, demanding essential workers be prioritized, after local authorities began putting other communities ahead in line for the vaccine.

The center also helped a group of female workers find legal representation when they became part of the #MeToo movement and came forward about sexual harassment they had experienced at a shellfish packing plant. It resulted in a $675,000 legal settlement for the workers in 2019.

Fallon said a board elects an executive director from among the leaders who emerge in the community, and the center sponsors a variety of educational workshops and weekend training on workers' rights as well as health and safety precautions in the workplace, which included more personal spaces for workers.

"This was well before COVID," Fallon said.

The work can be complex since it involves itinerant populations, some that work with temporary contracts. But with time, the center has become a community staple that's now evolving into a gathering place, where workers not only meet to talk about workplace issues but also to learn English and provide food and other needs that have evolved in the time of a pandemic.

Fallon credits it to the original sentiment of the grant from the Catholic Campaign for Human Development that helped the center open emphasizing the importance of having it be led by community members, valuing the needs of a unique culture and values.

"It was important to have a place where they feel comfortable," he said. "Where they know how to open another."

Raising wages: the right thing to do

Catholics should love their neighbor by getting vaccinated