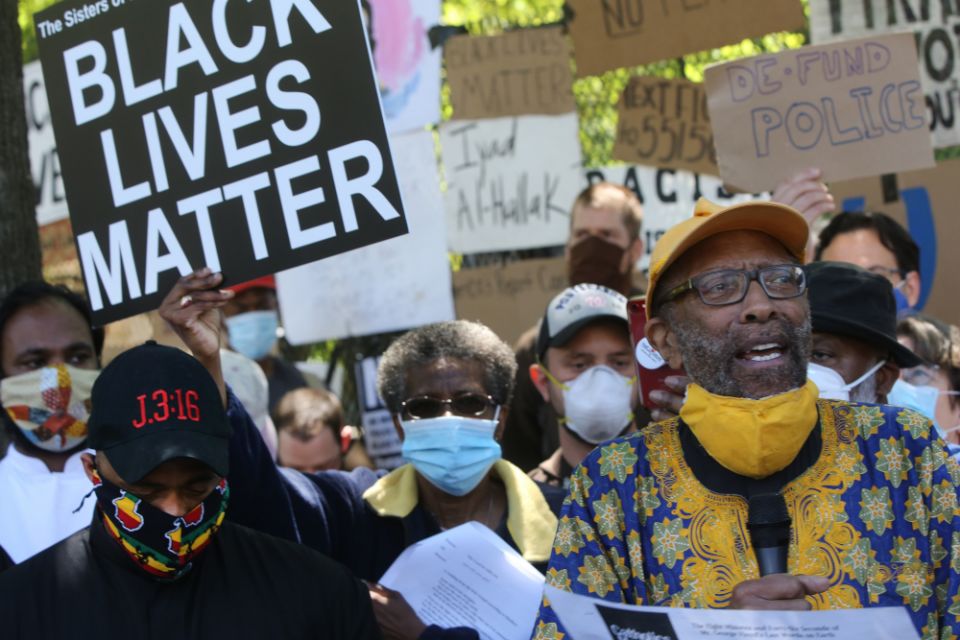 Msgr. Ray East, pastor of St. Teresa of Avila Catholic Church in Washington, speaks during a prayerful protest outside the White House June 8, 2020, following the death of George Floyd, an unarmed African American man whose neck was pinned to the ground by police for more than eight minutes before he was taken to the hospital. (CNS/Bob Roller)

Washington — This year, as tens of thousands of people nationwide protested racial injustices, Catholics similarly took to the streets and also joined in prayer services and discussions speaking out against inequalities and seeking a path forward.

The protest marches over the summer were primarily in response to the May 25 death of George Floyd, a Black man in Minneapolis who died after being pinned to the ground by a white police officer.

And more than six months later, the sting of Floyd's death was still felt in St. Paul, the city adjacent to where he died, where Catholics took part in a day of prayer and fasting against the sin of racism at the Cathedral of St. Paul.

"We hope to recognize in our prayer tonight at least some of the many ways, intentionally and unintentionally, that our words and our silence, our actions and our inaction, contribute to racial division," said Archbishop Bernard A. Hebda of St. Paul and Minneapolis at the Dec. 2 event.

In a homily during the service, Fr. Prentice Tipton Jr., rector at the Cathedral of Mary of the Assumption, and pastor of Holy Family Parish, both in Saginaw, Michigan, said God wants "to do a new thing" among races in this country. "And I believe the church is the venue where the new thing is meant to begin."

"If the church were to get this right, all of America, and I believe the whole world, will come to her knees because the church has found an answer, a remedy to the sin that has grieved a great nation for many, many centuries," he said. 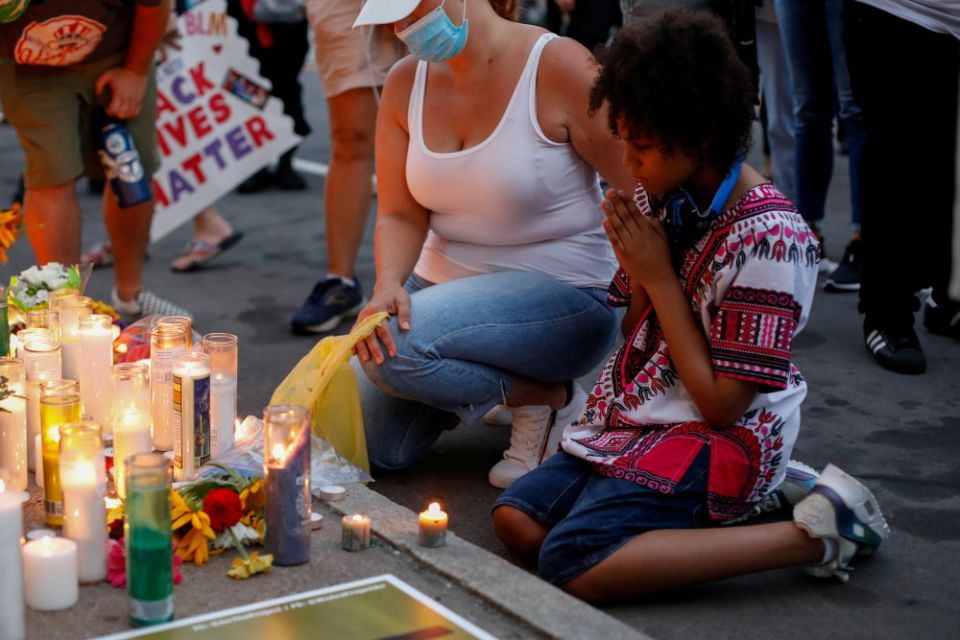 People in Rochester, N.Y., kneel in front of a memorial Sept. 3, 2020, during a protest following the death of Daniel Prude, a Black man, after police put a spit hood over his head during an arrest March 23. (CNS/Reuters/Lindsay DeDario)

Denise Holland, who attended the service with her husband and three children, thought it was "an important opportunity to come together as a community, as an extended family, almost to do a collective examination of conscience."

That sense of looking back at wrongdoings and forward to what could be done was on the minds of many Catholics who joined protests against racial inequality in cities and towns nationwide.

At a June 11 protest in Atlanta, more than 400 Catholics filled the street in front of the city's Shrine of the Immaculate Conception. "I was grateful to see this show of solidarity," said parishioner Cathy Harmon-Christian, who was one of many volunteers greeting marchers.

Fr. Victor Galier, pastor of St. Anthony of Padua Church in Atlanta and a member of the planning committee for the march, said the turnout exceeded his expectations. "It's no longer good enough to not be racist ourselves. We have to be actively anti-racist and work for the common good," he said.

He also said the march was just the beginning: "We really have to be working at this all of the time and dismantle the structure of sin wherever we find it."

Kenya Turner, who helped to organize "Black Catholics Unite: Stand For Justice March" June 6 in Louisville, Kentucky, said it was important to highlight Catholic social teaching that says all people have inherent dignity.

Turner, a parishioner at Louisville's St. Martin de Porres Church, said Black Catholics need the support and acknowledgment from the church, but they also need to "come together in solidarity to say to the city, to say to the state, to say to the world that we see, we acknowledge what's going on and let the world know we are in support of each other in our faith." 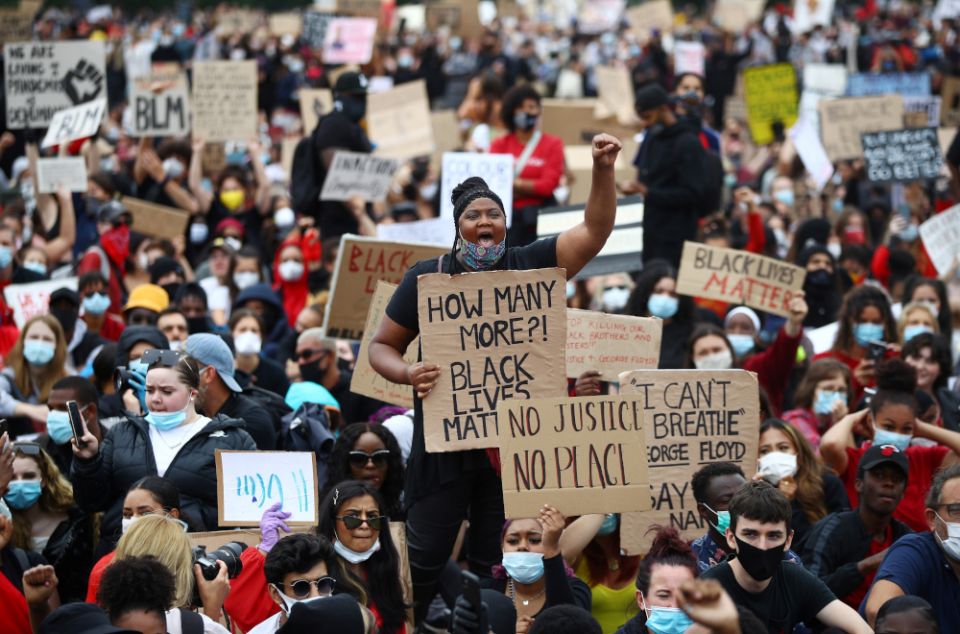 People hold banners in London's Hyde Park during a "Black Lives Matter" protest June 3, 2020, following the death of George Floyd, an African American man who was taken into custody by Minneapolis police and later died at a Minneapolis hospital. (CNS/Reuters/Hannah McKay)

That sense of solidarity also rang true for William T. Robinson Jr., a Black Catholic who joined a July protest march in Nashville that he called a "spiritual experience."

Robinson has seen his community struggle for too long, but he felt hopeful at the march. "This feels real," he said. "The diversity of people coming together for the common good ... the empathy is there; people are invested in this."

That sentiment was also expressed by Josephite Fr. Cornelius Ejiogu, who helped organize a Catholic gathering during a June protest near the White House.

"The Catholic voice as a group, as a family needs to be heard," he said, but added that what gave him the most hope was the sheer number of young people "of all colors coming out and peacefully protesting."

And despite what others may say of the protesters, he wanted to portray the Catholic angle of it, which he said involved speaking truth to power in a prayerful way.

In Portland, Oregon, amid the city's ongoing and, at times violent, protests, Portland Archbishop Alexander K. Sample urged protesters to stop the violence and renew their focus on racial justice.

One Catholic protester who caught the attention of President Donald Trump was 75-year-old activist Martin Gugino. After a widely circulated video showing him falling to the ground in June after being pushed by police in Buffalo, New York, the president tweeted that Gugino "could be ANTIFA provocateur" — referring to anti-fascism activists — and that he "fell harder than was pushed."

Gugino, a member of the Catholic Worker Movement, known for its peace activism and care for the poor, did not fit the description put on him, friends told Catholic News Service. 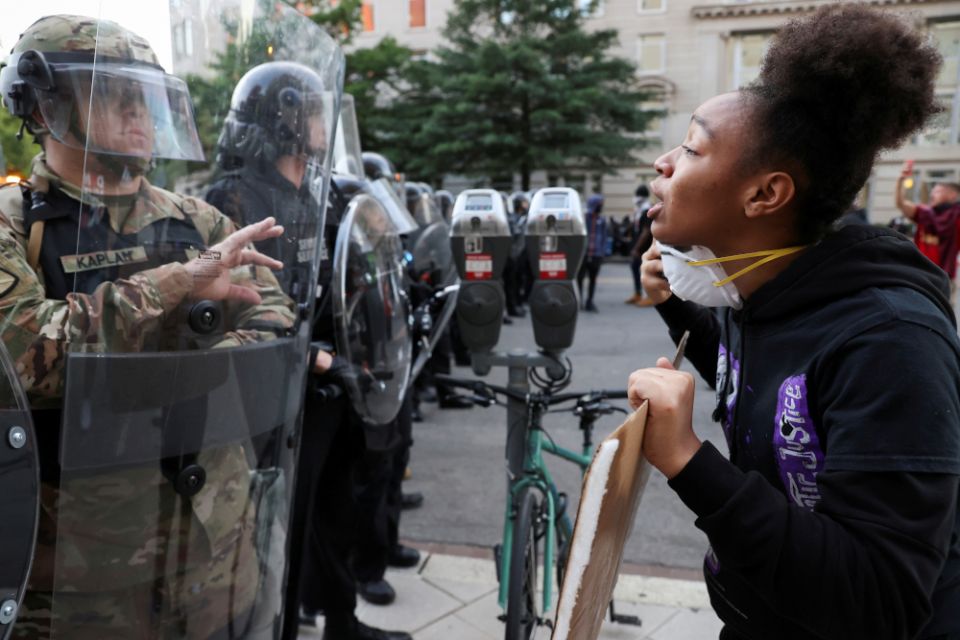 A person confronts riot police during a protest in Washington June 1, 2020, following the death of George Floyd, an African American man who was taken into custody by Minneapolis police and later died at a Minneapolis hospital. (CNS/Reuters/Jonathan Ernst)

The nation's fight for racial justice caught the attention of Pope Francis who called Bishop Mark J. Seitz of El Paso, Texas, on June 3, two days after a photo of the bishop kneeling while holding a "Black Lives Matter" sign went viral. That same day, the pope also called Los Angeles Archbishop José H. Gomez to thank the bishops for their pastoral tone and the church's response to demonstrations.

In late November, the pope also met with a delegation representing the National Basketball Players Association about their work in promoting social justice.

As the summer's wave of protests began to die down, the momentum to find a path forward continued at church-sponsored prayer services, panel discussions and planned diocesan initiatives nationwide.

At the end of a three-day racial justice program in October in the Louisville Archdiocese, retired Bishop Edward K. Braxton of Belleville, Illinois, told participants that the church doesn't need to say more, but it needs to do more about racial justice.

He said the backdrop for the gathering was "the sad and tragic story of the death" of Breonna Taylor, who was shot and killed during a police raid at her apartment in Louisville in March. He also said his words would not solve that "urgent local crisis," but he hoped they would contribute to conversations with neighbors, friends and fellow parishioners.

"The racial divide will not be bridged unless people of goodwill speak person to person and heart to heart about what is probably the greatest crisis facing the United States," he said. 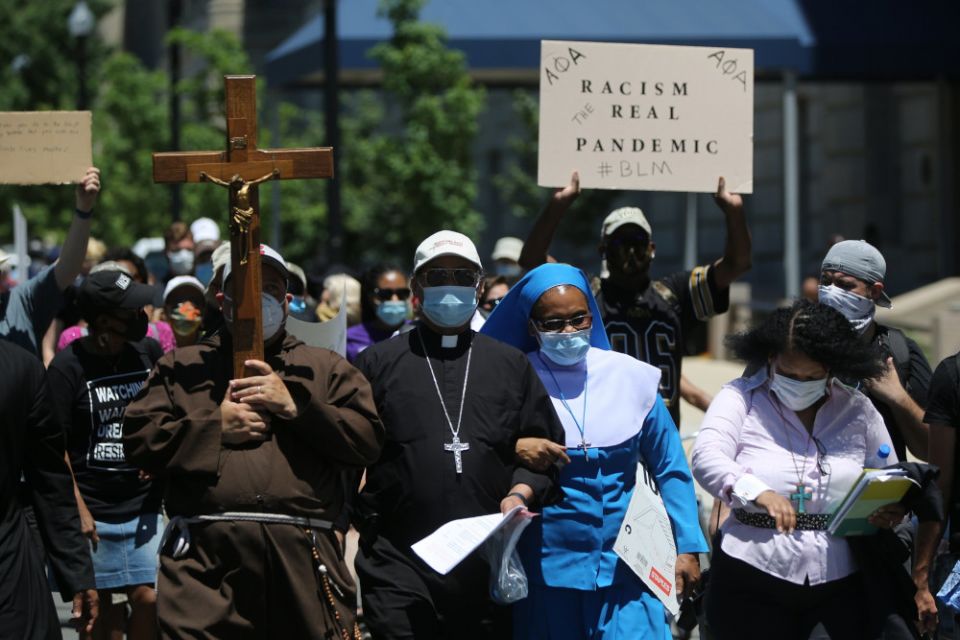 Washington Auxiliary Bishop Roy E. Campbell and a woman religious walk with others toward the National Museum of African American History and Culture in Washington during a peaceful protest June 8, 2020, following the death of George Floyd, an unarmed Black man in Minneapolis whose neck was pinned to the ground by a white police officer for more than eight minutes before he was taken to the hospital. (CNS/Bob Roller)

Other Catholic leaders similarly stressed the work ahead.

Bishop Shelton J. Fabre of Houma-Thibodaux, Louisiana, chairman of the U.S. bishops' Ad Hoc Committee Against Racism, told CNS in July the work of "dismantling personal racism and institutional racism" will be difficult, but it could be a watershed movement if Catholics were willing to work at it.

Since Floyd's death, he said, he has seen a "deeper desire" among Catholics and his fellow bishops to "assist in dismantling racism" wherever it exists.

Some Catholics pointed out that their spirit was with the marchers, even if they weren't out on the streets, especially due to COVID-19 concerns. This was especially true for older women religious, many who are often involved in advocacy work.

Black women religious who spoke with Catholic News Service, said they were inspired by the massive crowds demanding action, but they also acknowledged the long road ahead.

Sr. Leona Bruner, congregational leader of the Sisters of the Holy Family in New Orleans, a historically black congregation founded in 1842, said the wave of peaceful protests in all 50 states "should be a turning point" and is something she and fellow sisters are praying will happen.

Likewise, Sr. Anita Baird, a member of the Society of the Daughters of the Heart of Mary, and the founding director of the Archdiocese of Chicago's Office for Racial Justice, said she is optimistic, but she also takes the long view.

"We have to stay focused; we can't grow tired," she said. "We're at a moment that if we don't get it right, we're on our way to self-destruction as a nation."

Contributing to this story was Barb Umberger in St. Paul, Ruby Thomas in Louisville, Samantha Smith in Atlanta, Rhina Guidos in Washington, Ed Langlois in Portland, Dennis Sadowski in Cleveland, Theresa Laurence in Nashville and Junno Arocho Esteves in Rome.

Protocol approved on restrictions on bishops facing claim of abuse