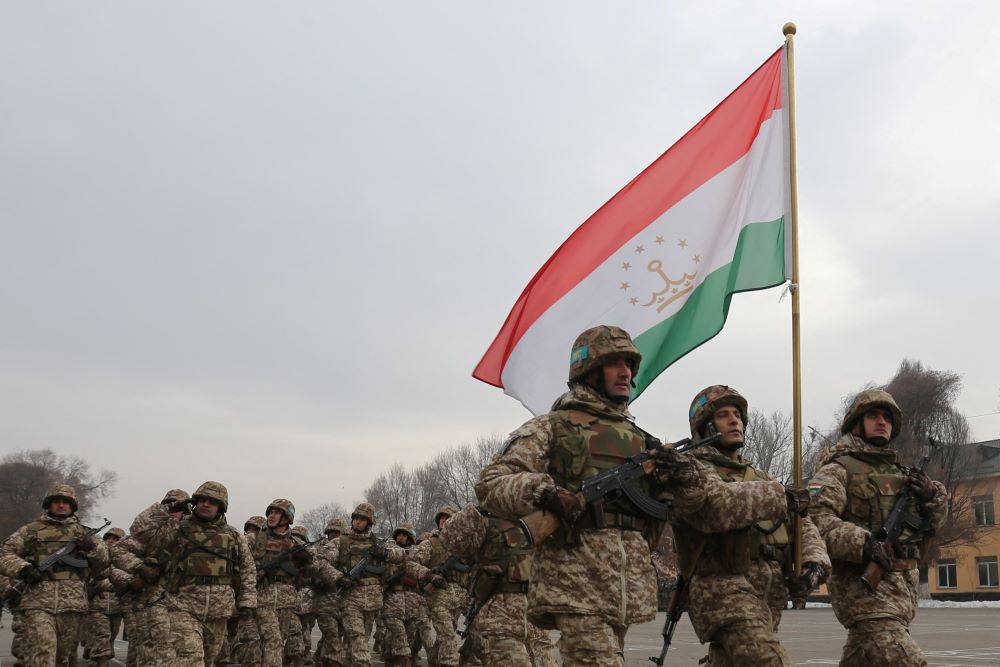 A ceremony in Almaty, Kazakhstan, Jan. 13 marks the beginning of the withdrawal of peacekeeping troops of the Collective Security Treaty Organization from Kazakhstan. Kazakh President Kassym-Jomart Tokayev had summoned the troops Jan. 2 to help quell riots that he branded a coup. (CNS/Reuters/Pavel Mikheyev)

A Kazakh church leader said Catholics were left "shocked and disorientated" when early January riots shattered Kazakhstan's image as an oasis of peace and stability.

"I've never known such ill will and aggression here — after so many years of excellent cooperation between faiths, and between the Catholic Church and the government," said Fr. Peter Pytlovani, secretary-general of the bishops' conference, based in the capital, Nur-Sultan, formerly Astana.

"This is why everyone is so shocked. Just as we were marking the 30th anniversary of Kazakhstan's independence, everything we'd gained in peace and dialogue was suddenly overturned and ruined. It's reminded us we must not only celebrate our richness in unity and mutual understanding, but also make greater efforts to protect it," Pytlovani told Catholic News Service Jan. 14.

The violence that erupted Jan. 2 was the worst since Kazakhstan's 1991 secession from the Soviet Union. During the riots, at least 160 were killed and more than 700 injured, mostly in Almaty, Kazakhstan's largest city. The riots were triggered by fuel price hikes.

Pytlovani told CNS while conditions were almost normal in the capital, tighter police and army restrictions were being applied in Almaty, where many buildings had been looted and burned.

"We were not aware of any aggression against places of worship, whether Catholic or belonging to other confessions, and our own churches are open again now for personal prayer, subject to coronavirus measures," Pytlovani said.

"We're still seeking information about injuries to church members. But no religious communities appear to have suffered significant damage, either materially or personally."

Kazakhstan's Interior Ministry confirmed Jan. 10 that about 8,000 people had been detained, mainly in the south and west, and it warned lethal force would be used to prevent any return to the disorder.

The same day, President Kassym-Jomart Tokayev branded the unrest an attempted coup and said a ban on gatherings would also remain in place for at least 10 days.

In a Jan. 9 Angelus message, Pope Francis voiced "deep concern" about the violence and entrusted Kazakhstan to Mary's intercession. He said he hoped social harmony would be "restored as soon as possible through a search for dialogue, justice and the common good."

Meanwhile, the Kazakh bishops said Catholics would remain "united in prayer" with Pope Francis, "for the repose of the souls of those killed," adding in a Jan. 10 website statement that priests were called on to "continue praying for an early resolution of the current situation and the reestablishment of peace and prosperity."

Pytlovani said that amid speculation, church leaders awaited clarification of who was behind the unrest and whether outside forces were involved.

"There's a group of very rich people in Kazakhstan, but also a very large segment living in simplest possible conditions at the social minimum," the bishops' secretary-general told CNS.

"After all the hardships endured, ordinary people appear to have had great expectations the state was now moving in a better direction, and that the current president would take steps to improve their lot. Society still seems ready to trust his government, provided such steps continue."

The Catholic Church makes up just 1% of the 17 million inhabitants of mostly Muslim Kazakhstan.

Pytlovani said Kazakhstan had faced problems with hooliganism, but had generally enjoyed "safe streets," adding that Catholics had maintained an "excellent dialogue" with Muslim and Orthodox groups in the country.