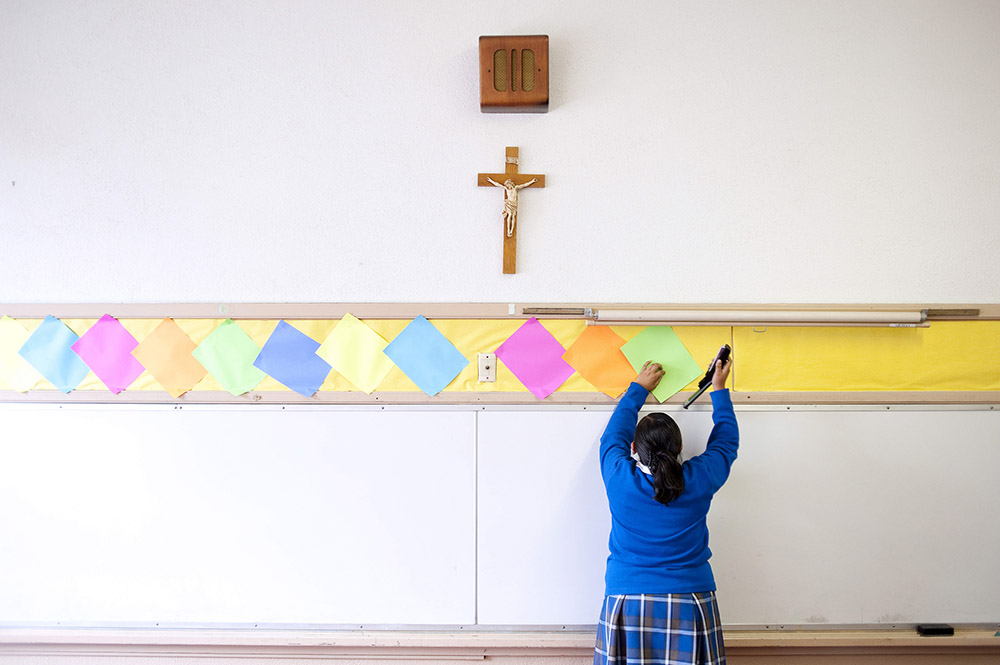 This July 18, 2012, file photo shows a student stapling colored paper to the wall of a classroom after summer school at Our Lady of Lourdes in Los Angeles. (AP Photo/Grant Hindsley)

Six Catholic elementary schools in the Los Angeles Archdiocese are closing at the end of the 2020-21 school year due to financial hardships heightened by COVID-19.

"These six schools had been trying to overcome financial challenges long before the pandemic," said Paul Escala, superintendent of schools for the archdiocese in his state of the union message posted on YouTube March 31.

Low enrollment, shifting demographics and distressed finances, Escala said, all contributed to the archdiocese's consolidation plan, which will place students and staff at nearby Catholic equivalents.

In a statement, the LA Archdiocese said families receiving tuition assistance from the Catholic Education Foundation who are transitioning to new schools will continue to receive the same funding.

"We will be welcoming those students and their families and staff to local Catholic schools in the fall with love and support," Escala said. "The ministry of Catholic education will continue on."

Related: Catholic schools in US hit by unprecedented enrollment drop

The closures affect about 350 students and 50 staff members, bringing to nine the number of Catholic schools that have been closed since June, according to the Los Angeles Times.

The financial and enrollment hardships of Catholic schools are not unique to Los Angeles.

The National Catholic Educational Association in February reported that enrollment in Catholic schools across the country dropped 6.4% from the previous academic year due to COVID-19 and economic stresses — the largest single-year decline in nearly 50 years.

More than 200 Catholic schools closed or consolidated at the end of the 2019-20 school year, with elementary schools making up a disproportionate share of school closures, the National Catholic Educational Association found.

Big-city dioceses have experienced the biggest enrollment losses, including 12.3% in Los Angeles, 11.1% in New York and 8.2% in Chicago.

[The Associated Press contributed to this report.]