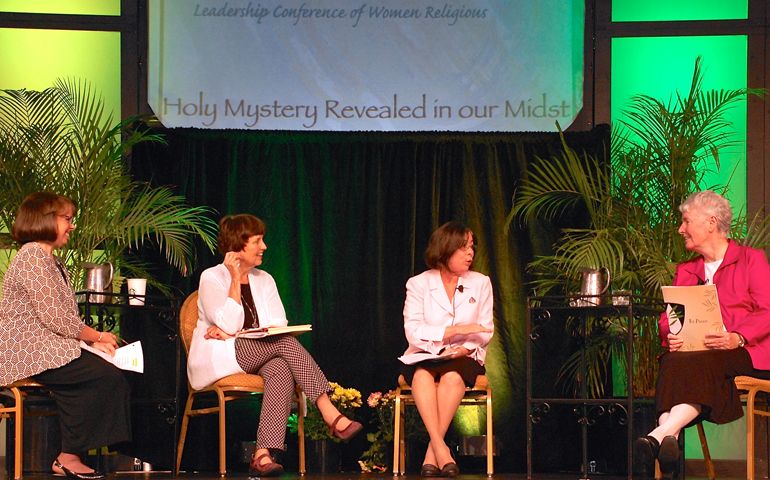 Nashville, Tenn. — The largest leadership organization for U.S. women religious began its first full day of its annual assembly Wednesday by focusing on one of the criticisms leveled against it: the contemplative, collaborative process for making decisions.

The Leadership Conference of Women Religious, made up of Catholic sisters who are leaders of their orders in the United States, represents about 80 percent of the 51,600 women religious in the United States. Nearly 800 of the group's 1,400 members have gathered here for their four-day annual conference.

Seattle Archbishop J. Peter Sartain listened intently as facilitators Catherine Bertrand of the School Sisters of Notre Dame and Mary Jo Nelson of Our Lady of Victory Missionary Sisters explained how truly listening to others and reflecting on their thoughts can change your thinking from individualistic to what is best for the community. Failure to listen, they said, leads to judgment, cynicism and fear.

The Vatican's Congregation for the Doctrine of the Faith appointed Sartain to oversee the changes in LCWR mandated by the Congregation in 2012 in a doctrinal assessment. After this assembly, Sartain must approve speakers at the group's events.

In the presidential address, a key part of every assembly because it sets the stage for much of the rest of the gathering, LCWR President Sr. Carol Zinn, a Sister of St. Joseph from Philadelphia, urged members to use the principles of music to contemplate how to listen to God.

Noting that the assembly is taking place next to the Grand Ole Opry, Zinn shared a video of country music star Clint Black singing, "When I said I do, I meant that I will 'til the end of all time be faithful and true, devoted to you." Zinn connected it to the situation for those in religious life.

"This assembly comes at a time when our consciousness is increasingly heightened to the lamentations of our world, our country, church and vocation," she said. "We gather here as faithful women of the Gospel, disciples of Christ and daughters of the church whom we love."

American bishops have criticized LCWR for focusing too much on social justice and serving the poor and not enough on fighting abortion and gay marriage, but Zinn said the song in God's heart demands serving our brothers and sisters, especially the poor and outcast.

"Are we singing with full voice the ways in which God's creation and Christ's body cry out for justice, inclusivity, compassion? Perhaps we're singing in muted tones the authentic and radical message of the Gospel and the vision of a Second Vatican Council church as the People of God, all the People of God, walking together," she said. "Likely, we're only whispering that Oneness from within and beyond the natural world to the most meaningful and sacred relationships regardless of race, gender, sexual orientation, economic status, or belief system."*

She noted that Christ was contemplative and urged members to follow the example.

"We see this rhythm in the life of Jesus: retreating to places of solitude and emerging more clear, more committed and more conscious of his life's purpose and mission," she said. "His contemplative consciousness and fidelity to mission deepened in tandem. It is and will be no less for us."

In a later session, LCWR members listened to a panel discussion by three sisters who discussed leadership and the contemplative process. Sr. Nancy Conway of the Congregation of St. Joseph said the challenges faced by LCWR have helped her, especially the apostolic visitation carried out by the Vatican's Congregation for Institutes of Consecrated Life and Societies of Apostolic Life. The congregation issued its report to the Vatican in 2011.

*An earlier version of this story misquoted Zinn.

The text of Sr. Carol Zinn's presidential address is here: