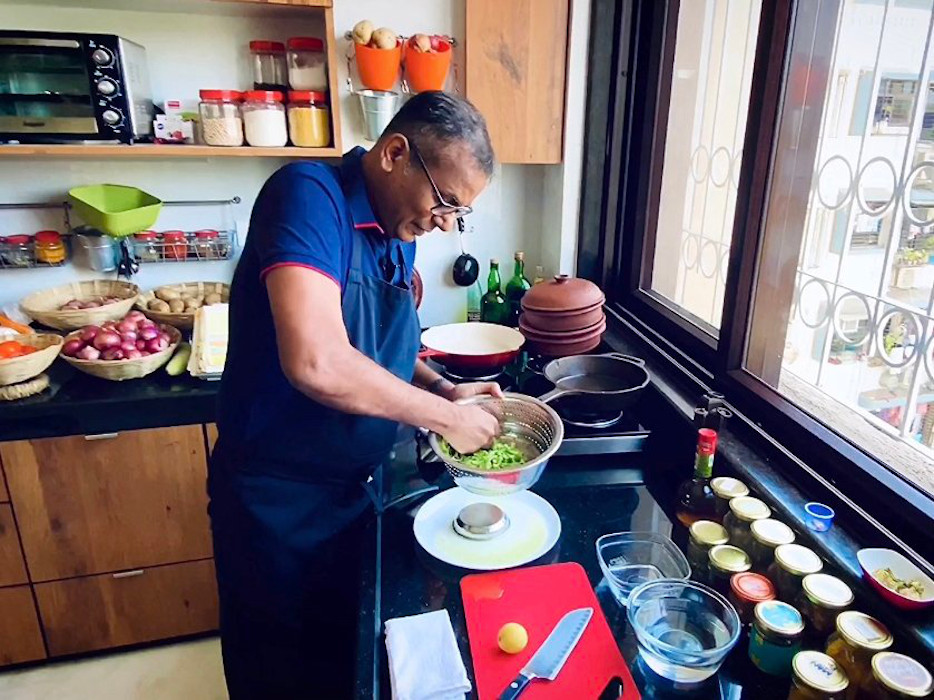 From his kitchen in a suburb of North Mumbai, 50-year-old Catholic priest Warner D'Souza preaches across a kitchen counter laden with garden-fresh vegetables and finely ground spices for a one-pot meal. The mini homily is a prelude to an episode of his YouTube program, "Food for the Soul," a series of lockdown lessons about food and spirituality.

D'Souza's program for sharing recipes, reflections and liturgies with believers online has gained over 6,000 subscribers across India since its debut in April, not long after Prime Minister Narendra Modi ordered a nationwide COVID-19 lockdown beginning March 25.

D'Souza, who is the pastor of Mumbai's St. Jude's Church, is also a professionally trained chef. He believes people must cultivate a more responsible approach to food consumption, especially as the coronavirus pandemic has led to scarcity.

"Jesus talks about us being the salt of the earth and light of the world," he says, tossing beans and seared prawns into an earthenware pot. "By using everyday words such as salt, Jesus made his homilies accessible to his disciples."

Switching fluidly from cooking to faith, the priest then turns to a hardbound copy of the Bible placed on his kitchen counter and recites verses from the Gospel of Matthew. He follows with a 20-minute disquisition on Jesus' Last Supper as a means of social engagement, constantly shifting from food to spirituality.

D'Souza was inspired to start his lessons when a news story cited food as the most heated issue in everyone's life since the lockdown was announced. Preparing and eating food, he felt, could be a tool for uniting people, from the destitute and migrant workers to professionals and homemakers, in a polarized society. Religious conflicts have spiked across India under the ruling Bharatiya Janata Party government.

"There was a palpable sense of fear due to the looming food crisis in India. So, I thought an integrative approach to faith can soothe tempers in these unprecedented times," he said.

Modi's lockdown has derailed the lives of over 1.3 billion people and pushed India to the brink of an economic catastrophe.

Workers have abandoned urban centers in an unprecedented exodus, heading to their homes in far-flung villages. Prolonged food shortages and broken supply and distribution chains have pushed thousands to the point of starvation. Many more have been deprived of their basic livelihoods.

It is feared that food riots and civil unrest will further impoverish the vulnerable sections of society who have been cast aside.

D'Souza first reached out to the poor in his church's community with food supplies, medical and financial aid. But as a "religious leader with a social conscience," as he calls himself, he wanted to do more to instill hope in people across different faiths.

"I felt the pulpit could be the church or the kitchen," said D'Souza. "The stereotype of a priest in a white cassock with bent knees takes away the humanness of a person." 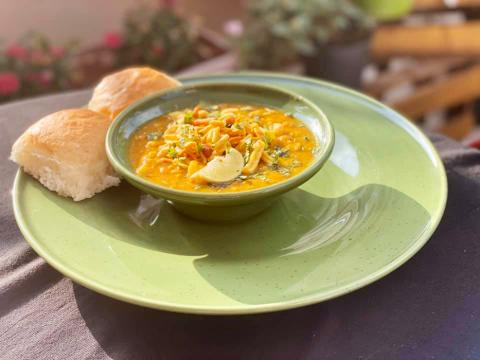 In his first video about conscious eating, D'Souza tried to shed the image of a "demigod priest." Wearing a black apron over a T-shirt, he read a passage from the Gospel of Luke in which a resurrected Jesus sat down for a meal on the road to Emmaus. While stirring a pot of chicken in barbecue sauce, D'Souza observed, "Jesus did a lot of faith-teaching through food. So must we."

Phil Samson, a former parishioner of D'Souza's from Mumbai, said, "Simple dishes not only instill hope in these troubled times, but also help us stay in touch with our spiritual center."

D'Souza's passion for food and cooking began in his childhood.

At the age of 12, he started helping his mother in the kitchen and bought fish and vegetables from Mumbai's local markets. Though not overtly religious, he regularly attended Mass and choir, read the Scriptures and became attached to the church.

Later, while training to be a professional chef with a well-known hotel group in Mumbai, D'Souza quit his catering job to pursue his "higher calling in the service of humanity." He joined a seminary, where for nine years he prepared for ordination. He served several parishes in Mumbai before joining St. Jude's Church as the head priest a decade ago.

"Your calling is never stagnant no matter what your vocation is. It's just important to listen to that inner voice instead of waiting for miracles to turn your life around," he said.

In 2011, he was appointed director of the Archdiocese of Bombay's Heritage Museum, overseeing a repository of Christian artifacts from churches in Mumbai, along with liturgical books, manuscripts, sculptures, vestments and paintings dating back to the 16th century.

Besides his deep interest in preserving the artistic and historic patrimony of the church, D'Souza shares faith-based stories through commentaries, blogs and travel writings.

His multidisciplinary approach to faith through art, cooking, gardening, heritage preservation and music has helped him evolve while staying firmly grounded.

"My faith isn't one-dimensional," he said. "From baking bread that satisfies human hunger, I turned to breaking bread to fulfill people's spiritual needs."

Although the "Food for the Soul" program is a direct response to the pandemic, D'Souza has been using the internet over the last four years "for the purpose of evangelization and not conversion," as he calls his outreach efforts. 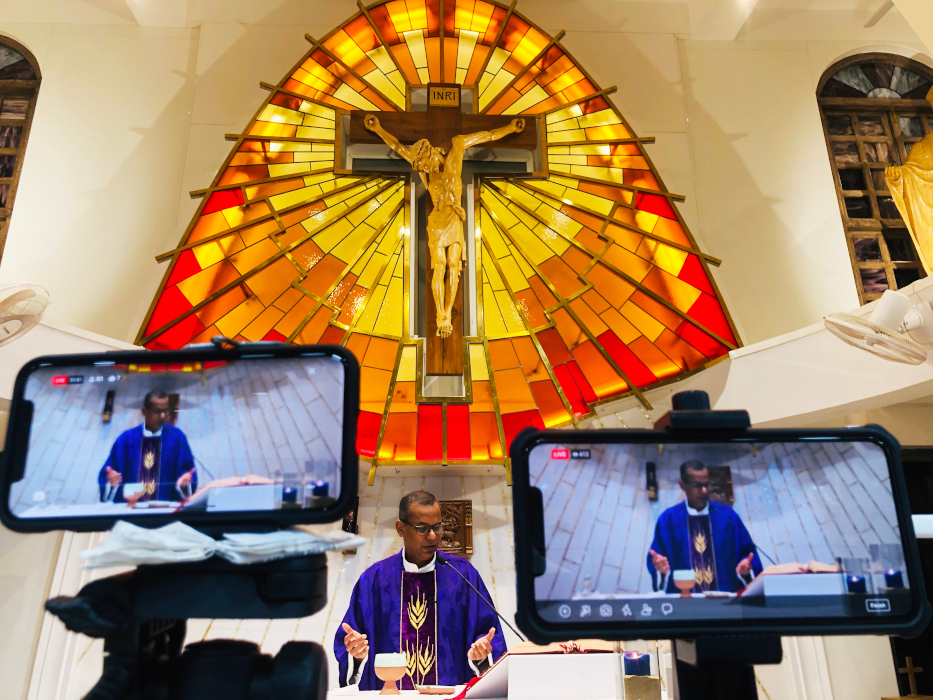 Fr. Warner D‘Souza, the head priest of St. Jude’s Church, at a service in Mumbai, India. The service was broadcast live for followers to watch online. (AP/Shaliesh Shetty)

Not only does he broadcast his liturgical services on social media, but also shares faith-based stories online to give minorities hope in a divided India.

As soon as the lockdown was announced, D'Souza implored his parishioners to keep in touch with their faith despite the call for physical distancing.

"I told them even Pope Francis has called the internet a gift from God, so virtual forms of religious engagement can bring humanity together in these uncertain times," said D'Souza.

The priest thinks it's important for religious leaders to adopt more creative approaches to solidarity-building, as a way to combat online trolls and hate-mongering.

His food show, he said, is intended to cultivate a deeper social and environmental consciousness — where consumption is seen not as a luxury, but as a means of respecting our ecosystem and helping people live with dignity.

Manju Mukherjee, a homemaker in Kolkata from a Hindu family, said, "His method isn't one-dimensional, but the priest should collaborate with other religious leaders for a multifaith food program."

D'Souza calls the coronavirus pandemic a wake-up call for religious and political leaders to end their hate and triumphalism and see themselves merely as agents of hope.

"Even though I can't help thousands of our hapless migrant workers, a food show can at least get some people to think consciously about our planet," he said.