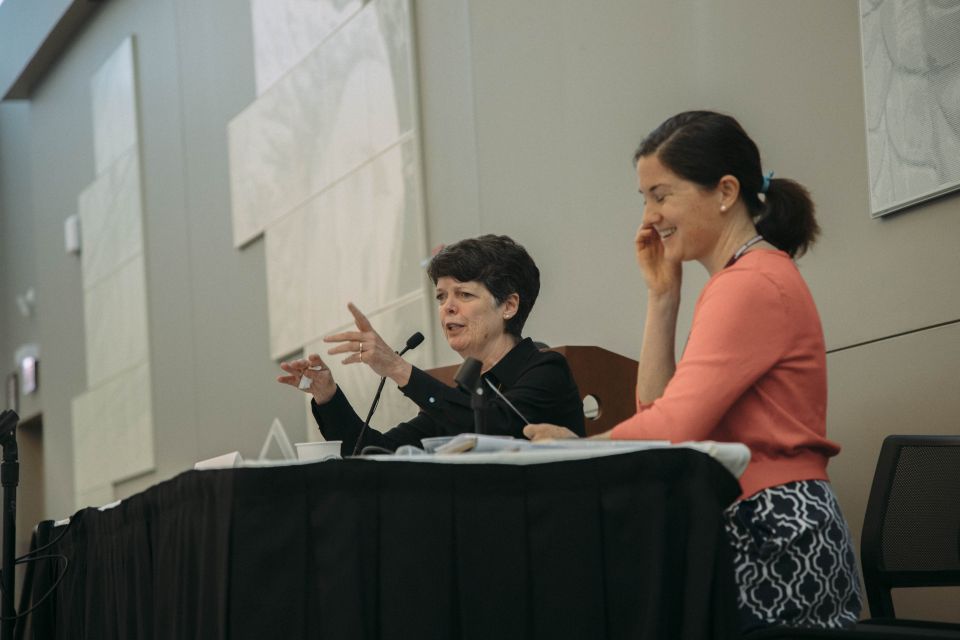 So said poet and professor of Catholic Studies Angela Alaimo O'Donnell in her remarks opening the Catholic Imagination Conference at Loyola University here Sept. 19. The statement was verified by the content of the conference, with presentations by more than 80 artists, including poets, novelists, filmmakers, playwrights, composers, journalists, biographers, editors, publishers and critics. The event was sponsored by Loyola's Hank Center for the Catholic Intellectual Heritage.

A recurring theme made itself felt in the addresses, workshops and breakout sessions: the desire to address and speak to the challenges and crises facing the Catholic Church — especially the abuse of minors and subsequent cover-up, and the role of women in the church.

In her plenary address on Saturday, novelist Alice McDermott said, "This is an existential moment for the church."

Acknowledging that if she could do what she prefers, she would not take on the mantle of activist. "I want to stay at home and write. But now is the time," she said.

In the long summer last year of the McCarrick scandals and the Pennsylvania Grand Jury revelations, McDermott and a number of Catholic women met to hammer out "5 Theses" which they then distributed to bishops at the annual conference in Baltimore that fall. They called for full transparency, hearing the voices of survivors, simple living for church leaders, putting women in church leadership roles and praying for a reformed church.

McDermott was not the only keynote speaker who spoke of a failure of a Catholic imagination to, in her words, "picture in our minds a Church made new or redeemed."

The previous day essayist Richard Rodriguez noted that "something very large is happening, but the church doesn't know what to do about it." Speaking from his experience as a gay Catholic, Rodriguez reflected that for his whole life he has been "in love with a church that tells me I don't know what love is."

In speaking to the abuse crisis, Rodriguez asked participants to use their Catholic imaginations to consider the lives of those perpetrating the abuse. "What do we know about these priests? We know nothing about the burden of these fallen priests." Rodriguez himself in his address did some of that imagining. Acknowledging his friendship with the late theologian Virgilio Elizondo, an accused sex abuser, Rodriguez spoke to the transformation in Elizondo's character the last time he saw him. And after Elizondo's apparent suicide in 2016, Rodriguez was struck by the overflow crowds that attended his funeral in San Antonio. "He was ours," Rodriguez said. "We were not putting him away."

Near the conclusion of his remarks, Rodriguez, affirming the life-giving role religious sisters had played in his own faith journey, noted that "Women are going to write this century." The theme of women's role in a church in which they have often been marginalized, unheard and unrepresented repeated itself in sessions, talks and conversations throughout the conference.

On Saturday, on a panel titled, "Still Guests in Our Own House," Dorothy Fortenberry, Patricia Hampl, and Sarah Cortez offered personal perspectives on their experiences as women writers and women in the Catholic Church. Fortenberry, a playwright and television based out of Los Angeles, read from "Half Full of Grace," an essay that marked her "coming out" as a Catholic writer.

Staying Catholic isn't easy, though, Fortenberry acknowledged in a follow-up conversation on the panel. In the summer of 2012 for instance, a parish communication on the "Fortnight of Freedom" made her feel that "there was a particular kind of woman the church wanted me to be," one that Fortenberry didn't recognize herself to be. 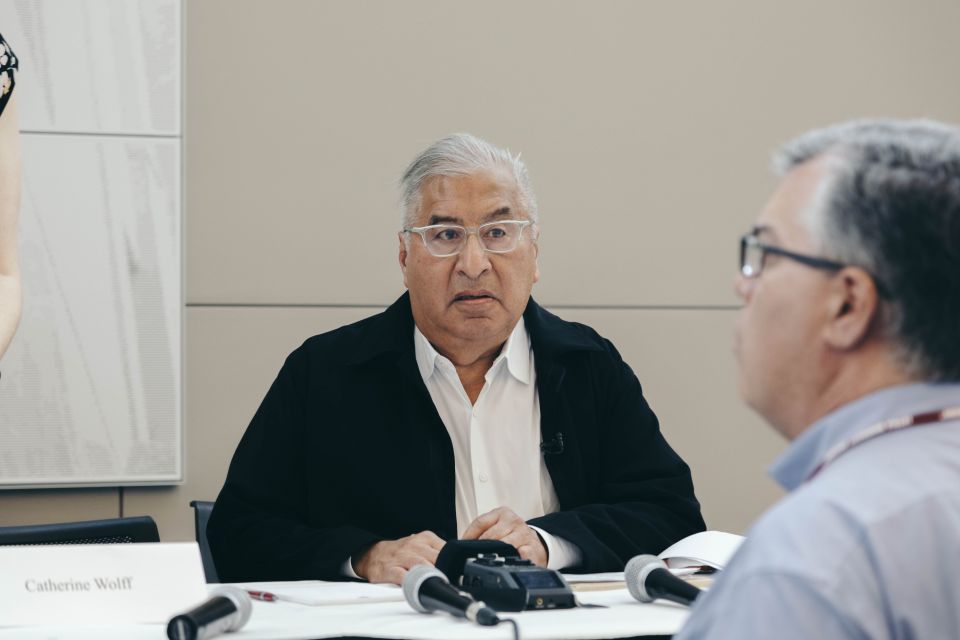 Cortez, a police officer, poet and editor from Houston, in her piece, "One Woman and Her Catholic Imagination" cited the line from Albert Camus as bedrock to her own artistic credo: "To state quite simply what we learn in time of pestilence: that there are more things to admire in men than to despise." In her own work and life, Cortez said, she wonders at and works against anger. In terms of her place as a woman writer and police officer, she added, "As a woman, it has never occurred to me to exclude myself."

The divided and polarized political spaces of the 21st century American and American Catholic world were a topic of discussion and reflection throughout the conference. "More people are up for grabs, ideologically and theologically," noted New Yorker writer and former Obama staffer Vinson Cunningham, in a panel discussion of journalists on the topic "Curating the Catholic Imagination."

Citing the growth of what he termed "Catholic nationalism" as a part of the efforts of Steve Bannon, Cunningham expressed concerns about the ease of potential radicalization of young people as a result of social media.

Jesuit Fr. Matt Malone, editor of America magazine, echoed this concern but also saw opportunities for Catholics, beyond the warring factions of Catholic Twitter. "We can look at our witness as Catholics in a very narrow way," Malone said. "But to focus only on the actions of the bishops in the form of statements and other communication is itself a form of clericalism." Malone offered the issue of immigration a case in point, citing the ministries of many parishes on the border offering care and support to immigrants. "That's the Catholic Imagination," Malone said.

The 2019 Conference is the third iteration of the Catholic Imagination gathering, which was inaugurated in 2015 at the University of Southern California's campus under the leadership of poet Dana Gioia. One of the main goals of the conference, Gioia said, in his introductory remarks with O'Donnell, was to address the sense of isolation in Catholic writers. A key purpose for the conference is to attend to that isolation and foster a sense of both respect and community for all of the artists able to attend, they said.  If numbers are any indication, those purposes are being achieved. The Conference has grown, from approximately 200 writers in 2015 to approximately 400 at the 2017 gathering at Fordham, and now to nearly 500 in Chicago in 2019. 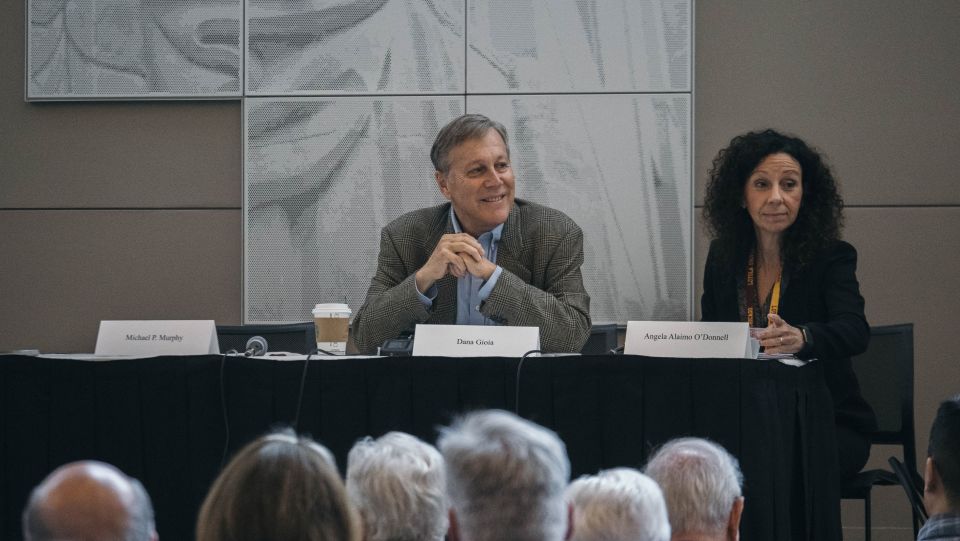 Dana Gioia and Angela Alaimo O'Donnell led the first two iterations of the Catholic Imagination Conference in 2015 and 2017. (Courtesy of Loyola Chicago)

At the same time that the conference fostered community for Catholic artists, it also served as an occasion to honor the outstanding achievements of some of those artists. To that end, Paul Mariani was honored at the outset with the Flannery O'Connor Lifetime Achievement Award for his contributions in poetry and literary biography, and, on Saturday evening, poet Mary Szybist, author of the 2013 book Incarnadine: Poems, the George W. Hunt, SJ, Prize for Excellence in Journalism, Arts and Letters in the category of poetry.

In addition the conference made space in one of its sessions, "Dreaming the Black Catholic Imagination" to honor the work of novelist Toni Morrison, who died in August. As part of that panel, Jesuit Fr. Joseph Brown, a poet and professor, wove reflections of his own in response to and in conversation with Morrison's writing, especially from her 2008 nonfiction collection, What Moves At the Margin.

In one particular passage he quoted, Morrison writes about the qualities of a good novel, but in truth they could apply to much of the aspired-to (and realized) work of the artists at this year's conference:

For this writer anyway, the Catholic Imagination conference offered a deepened sense of both the problems and opportunities facing Catholic artists, as well as the powerful — and yes, beautiful — ways they are working to engage them.

[Zach Czaia is a poet, playwright and high school English teacher living and working in Minneapolis. His collection of poems, Saint Paul Lives Here (In Minnesota), was published in 2015 with Wipf & Stock Press.]

Editor's note: To access audio and video from the conference, or to learn more about the Hank Center in Loyola that sponsored the 2019 Conference, go to https://www.luc.edu/ccih/.