The Fashion of Faith

'Heavenly Bodies: Fashion and the Catholic Imagination' at the Metropolitan Museum of Art 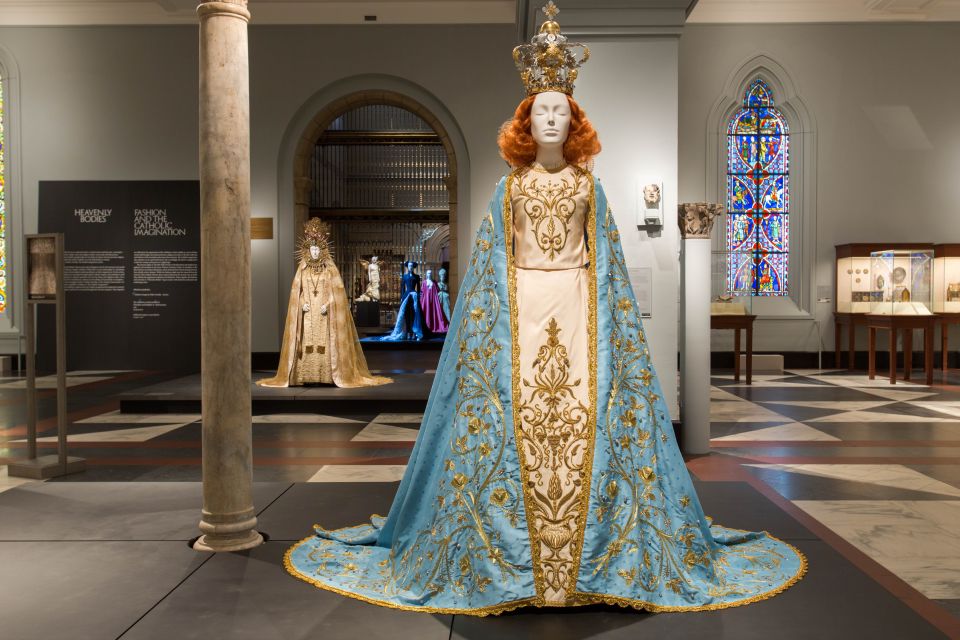 New York — When Andrew Bolton, curator in charge of the Costume Institute at the Metropolitan Museum of Art, first entertained the idea of an exhibition that would create a dialogue between faith and fashion, he was thinking of the five great world religions — Islam, Buddhism, Hinduism, Judaism and Christianity — and showing fashion inspired by them in galleries devoted to those belief systems.

Gradually he found that a majority of designers seemed indebted especially to Catholic imagery. He then imagined having as a cornerstone material from Rome and the papacy itself. Bolton had lengthy negotiations with Vatican officials and received important support from Anna Wintour, editor of Vogue and a Met trustee, and the designer Donatella Versace, and the endorsement of Cardinal Gianfranco Ravasi, president of the Pontifical Council for Culture. He announced the exhibition last February in Rome. There would be a loan of more than 40 exemplary treasures from the Sistine Chapel Sacristy.

With major backing from Christine and Stephen Schwarzman, "Heavenly Bodies: Fashion and the Catholic Imagination" has now opened at the Met to great fanfare and even greater crowds.

Spread through a full 26 galleries, the show opens dramatically at the entrance to the museum's central axis in the galleries of Byzantine art, where a column of five glittering figures in richly hued, beaded dresses (from Dolce & Gabbana) file through the North Gallery and five others in gold and silver (from Versace) through the South Gallery. All show the influence of mosaics, the former imprinted with religious images, the latter with crosses.

Placed cleverly in the apse that follows is Jean Paul Gaultier's "Ex-Voto" Evening Ensemble (2007) — provocative in the extreme. A nearby cape (1938) by Elsa Schiaparelli, on the other hand, is also inspired by votive offerings — and charming. Her contemporary, Gabrielle "Coco" Chanel, is represented by pendants and rock crystal pieces that could have been made yesterday. And don't miss the famous "Maltese Cross" cuff bracelets that her friend Duke Fulco di Verdura made for her (circa 1935).

Providing clothing for statues of the Virgin Mary or the Madonna and Child became popular in the early Middle Ages, and two modern variations of the devotion are shown in the Medieval Europe Gallery, one by Riccardo Tisci (circa 2015) on a mannequin with flaming red hair, and the other by Yves Saint Laurent (circa 1985), topped by an elaborate headdress and brambling bush crown.

What follows in the Medieval Sculpture Hall is a veritable ecclesiastical fashion show, organized along the lines of a scene from Federico Fellini's "Roma" (1972), though intended to avoid his carnivalesque satire. To background music by Michael Nyman — that I found assaultive, but another visitor pronounced "very spiritual" — proud figures process through the hall: an Alexander McQueen evening ensemble that seems rather decorous until you look more closely, a Pierpaolo Piccioli red silk taffeta evening dress for Valentino with daring décolletage, and John Galliano's evening ensemble for Dior that outdoes Rihanna's papal-esque outfit at the Gala that is more or less the emblem of the exhibition. 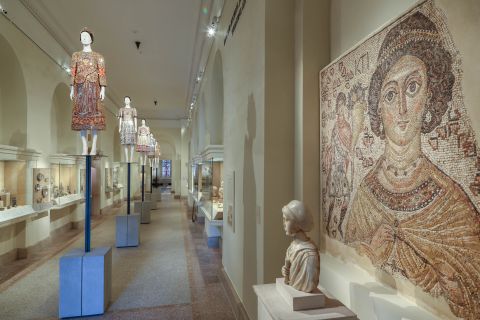 On either side are seven mannequins solemnly shoulder to shoulder in costumes inspired by the soutanes worn by priests and the same number responding to the habits of religious women. Further on is a billowing, over the top wedding ensemble by Yves Saint Laurent (1977-78) with angelic wings that are echoed by another wedding ensemble from John Galliano (2005-6) inspired by the Cuzco School in Peru (a rare reference to Latin American Catholicism). More wearable (I would think), and certainly gorgeous, is Christian Lacroix's wedding ensemble (2009-10) inspired by the tradition of the dressed Madonna.

Over the west door of the gallery floats a Thierry Mugler "Madonna" evening ensemble (1984-85) in ivory and pale-blue chiffon that enchantingly bids you to continue across the museum to the entrance to the Robert Lehman wing. There, a stunning group of nine dresses for Rodarte by Kate Mulleavy and Laura Mulleavy (2011) form a celestial choir flanked by two classic Lanvin evening dresses, dubbed "Incertitude" (1936) and "L'Ange" (1939). The latter, in the designer's signature "Lanvin blue," was inspired by the paintings of Fra Angelico and featured in the New York World's Fair of 1939.

The mood changes drastically when your visit takes you next to the Vatican Collection in the Costume Institute. Opulence, order and office are the watchwords in the elegantly displayed liturgical garments, altar furnishings, papal jewelry and even a pair of Pope John Paul II's red slippers. And it should be noted that almost all the pieces were donations to the popes, not commissioned by them. (Another quibble: I found the Palestrina played in the background intrusive, though another visitor assured me it was "divine.") 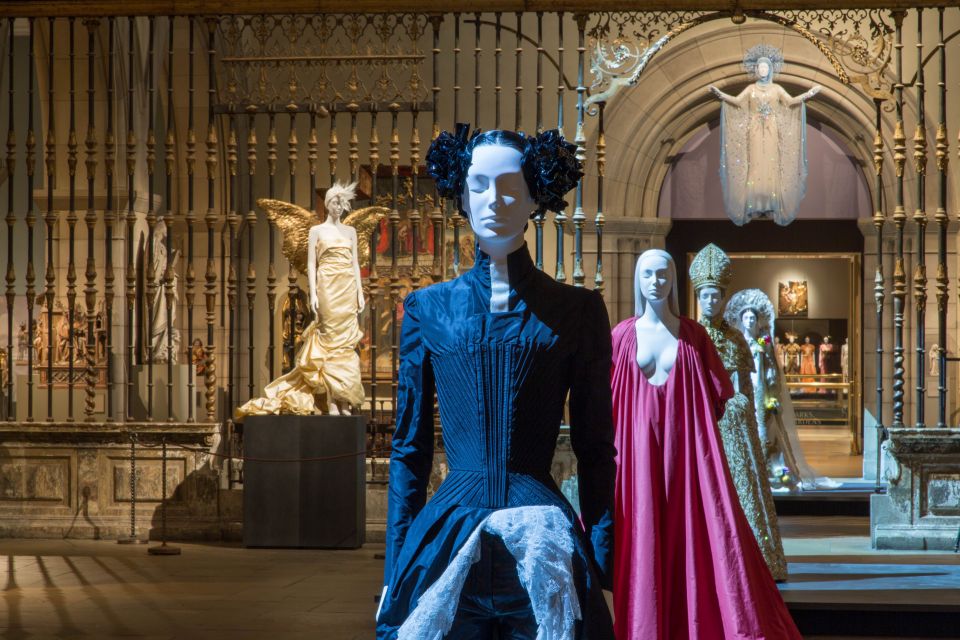 A chasuble and two dalmatics worn by Pope Pius IX (1854-56) suggest at the very beginning the extraordinary skill and patience of their embroiderers. Three great mantles, worn by Popes Benedict XIV, Benedict XV and Pius VII respectively, are distinguished by handsome shields on their backs — Benedict XV's featuring the Dove of the Holy Spirit and Pius VII's containing elegant Neoclassical floral motifs. A gold and white dalmatic of Pius IX has an exquisite interplay of border and arabesque arboreal form containing sheaves of wheat and bunches of grapes to refer to the Eucharist. Nearby a cope worn by Benedict XV (1918) has a similar color scheme but is far more elaborate, with depictions of the four evangelists in its quatrefoils.

Two wall vitrines in the Carl and Iris Barrel Apfel Gallery present pectoral crosses, rings and ornate clasps, while 9 tall cases* display mitres, tiaras and altar furnishings. One of the mitres was a gift to Pius XI from Benito Mussolini to commemorate the signing of the Lateran Treaty on Feb. 11, 1929. The tiaras all come from Pius IX — the standout is easily the one he first wore in 1854 as a gift from Queen Isabella II of Spain as a sign of respect and devotion (or perhaps to excuse her government's anticlerical laws). The magnificent piece contains about 19,000 precious stones, most of which are diamonds.

If a certain surfeit of liturgical luxury has set in for you at this point, you may want to pause before the Matisse chasuble that you passed on the staircase down to the Vatican material. Created for his great project of the Chapel of the Rosary in Vence, France, it fairly sings the spring — and simplicity.

"Heavenly Bodies" is conceived as a series of stories, with an accompanying suggestion of pilgrimage. It also has the musical form of a concerto, with its rousing, presto opening, the adagio movement of the Vatican Collection and then a serene, andante resolution with the fashion that is shown in The Cloisters, the Met's medieval collection in its splendid castle at the top of Manhattan. In years to come it may well be this third part of the exhibition that people will remember best. 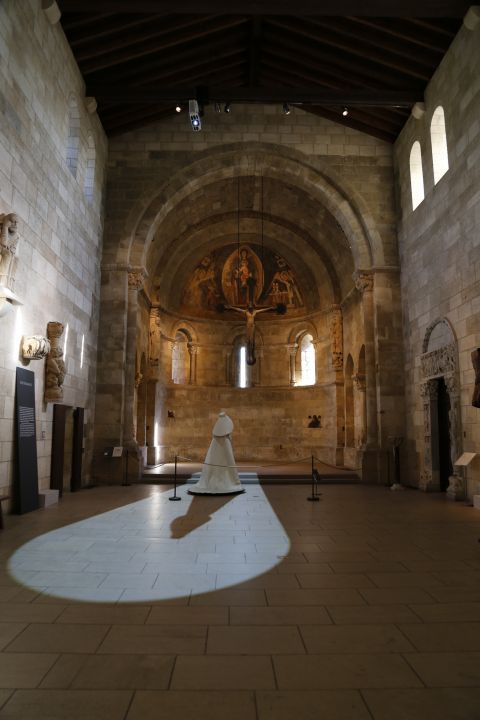 The Fuentidueña Chapel at the Met Cloisters (Metropolitan Museum of Art)

Take, for example, the exquisite wedding dress (1967) by Cristóbal Balenciaga that is posed in the late 12th century Fuentidueña Chapel beneath the glorious crucifix from Castile-Leon (circa 1150-1200) that hangs from the central arch of the apse. Whether one knows that this is an image of the triumphant, risen Christ (eyes wide open beneath his golden crown) or not, the reciprocal reverence of the scene is transcendent — perhaps the high point of the show, the king of heaven with a regal bride. "Balenciaga's atelier was often compared to a monastery," the exhibition's munificent two-volume catalog tells us, and Eve Auchincloss has observed that "for Balenciaga, designing clothes was more than a craft, more than art; it had the characteristics of a religious vocation."

The coup in the show's installation (its overall design is by Diller Scofidio + Renfro) is to use the museum's famous cloisters to present much of the fashion outdoors under their arcades (in glass cases).

In the Saint-Guilhem Cloister from southern France, two ensembles in elegant black by Maria Grazia Chiuri and Pierpaolo Piccioli for the House of Valentino are shown, one echoing the arches of the Roman Coliseum, the other inspired by the Black Madonna of Częstochowa and decorated with stars.

In the largest and most beautiful cloister, the Cuxa Cloister with its pink Languedoc marble capitals and columns, and its neighboring Pontaut Chapter House, both also constructed from elements of Benedictine abbeys in France, the monastic influence on the fashion is striking. Ann Demeulemeester's evening dress (2013) has a monochromatic palette and a simple, flowing form. 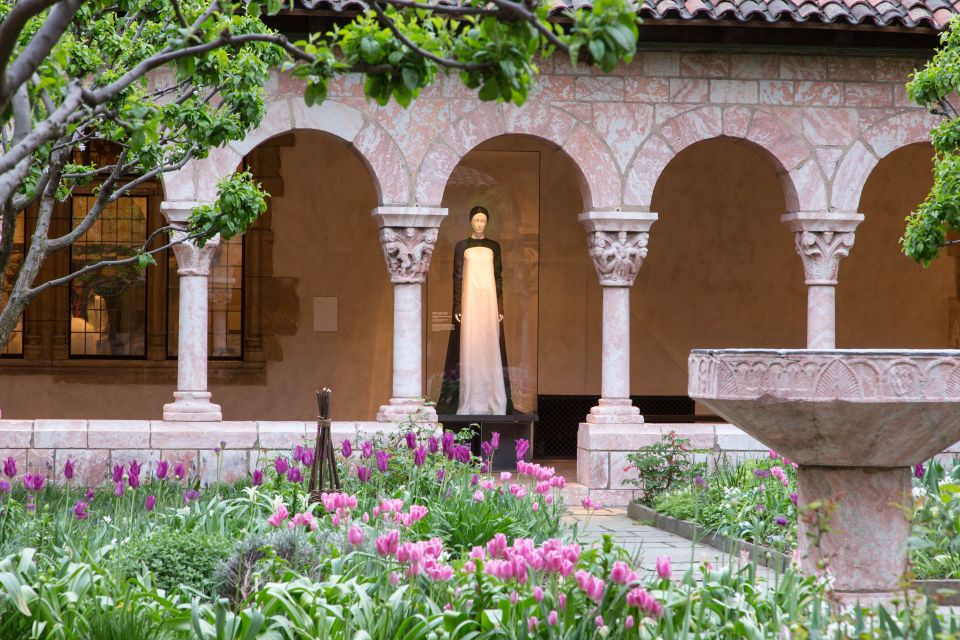 Two similarly columnar ensembles by Pierpaolo Piccioli for Valentino (2017-18) were inspired by the paintings of the 17th century Spanish master, Francisco de Zurbarán. Balenciaga, represented by an evening cape and a raincoat, is said also to have been influenced by Zurbarán, though he never himself claimed that. And for simple but luxurious elegance, almost nothing can match the cascading, hooded cape or two wide-sleeved evening dresses, one in black, the other light brown, by Madame Grès (from the 1960s).

Some lighter hearted and more colorful fashion is presented in the Bonnefont and Trie Cloisters, and throughout the rest of the museum: in the Late Gothic Hall and Merode Room, in the Nine Heroes Tapestries Room and, most famous of all, the Unicorn Tapestries Room. (A marvelous evening dress by Maria Grazia Chiuri and Pierpaolo Piccioli (2016-17) tells its own story of the hunt of the unicorn.) And by the end of your visit, you realize that you have to return to pay more attention to the art that either inspired or echoes the fashion. (The exhibition continues through Oct. 8.) 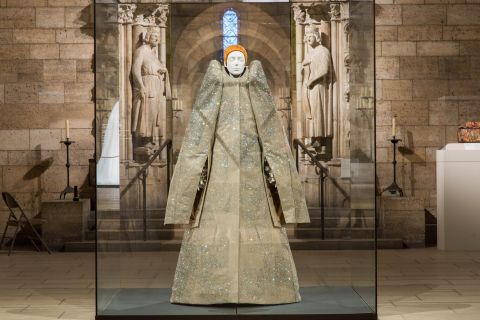 Bolton has said that "ostensibly the show is about Catholic imagery, but fundamentally it's about creativity and what drives creativity." I expect he has in mind the creativity of fashion. But a further chapter might also consider the creativity of the church inspired by the Holy Spirit. With its cornerstone in the Vatican Collection, "Heavenly Bodies" almost inevitably has an ultramontanist cast. (The popes chiefly represented are Leo XIII and, especially, Pius IX.)

Since the Second Vatican Council (1962-65), Catholicism has become a world church with the Bishop of Rome called indeed to care for and assure the unity of the church. But the council taught clearly that it is not only the pope who is the Vicar of Christ. Every bishop is a vicar of Christ. And the college of bishops which serves the church does so with and under the pope — not only under, but also with.

This new and promising context is touched on in wise words from the eminent Catholic theologian David Tracy, who writes in the catalog that "in historical fact, Catholic Christianity is a multicultural, pluralistic tradition — starting with not one but four gospels! — grounded in commonly held beliefs and practices that are both described and lived in highly divergent ways. To appropriate a phrase from James Joyce, Catholicism means 'here comes everybody.' "

[Jesuit Fr. Leo O'Donovan is president emeritus of Georgetown University in Washington and a frequent commentator on the arts for NCR.]

*The number of cases in the display has been corrected.

Read this next: Imagining Catholicism at the Metropolitan Museum of Art
A version of this story appeared in the June 15-28, 2018 print issue under the headline: The fashion of faith .

Culture | The Fashion of Faith

What are they thinking at the Vatican?

Take and Read: The Analogical Imagination