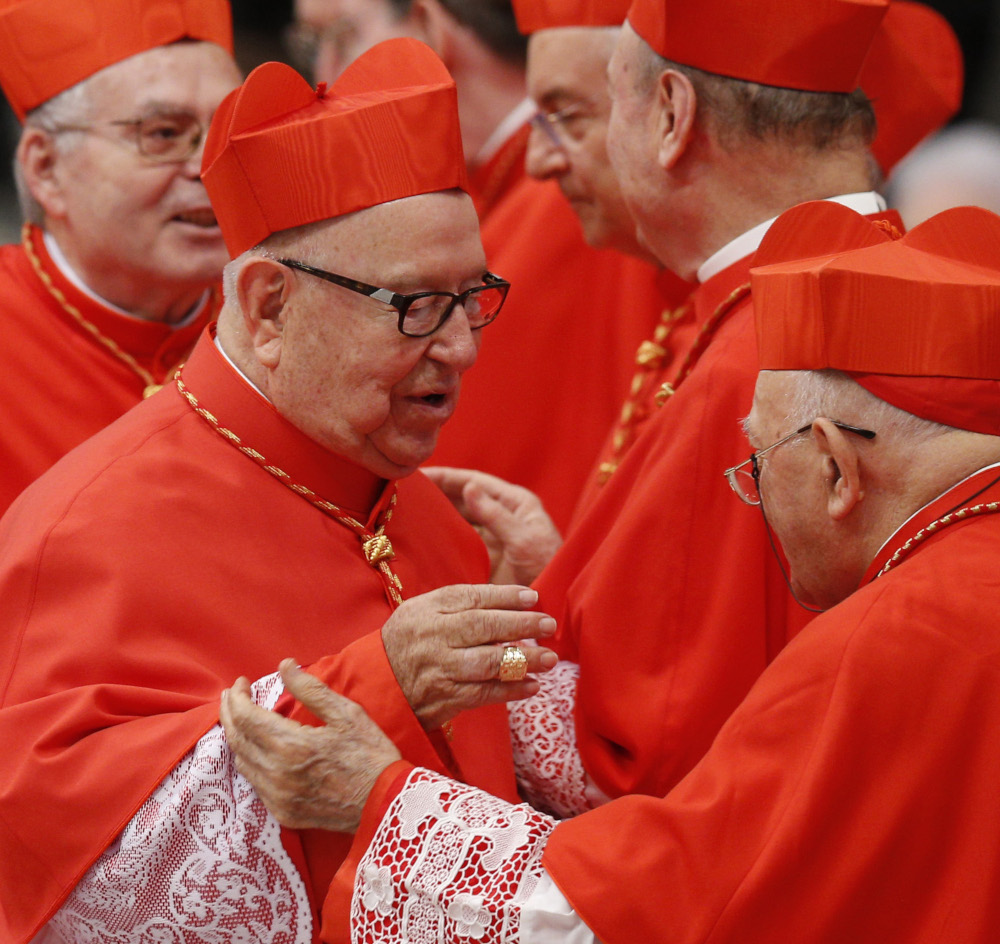 Cardinal Sergio Obeso Rivera, retired archbishop of Xalapa, Mexico, greets another cardinal during a consistory in St. Peter's Basilica at the Vatican June 28, 2018. Obeso, who was created a cardinal by Pope Francis a little over a year ago, died Aug. 11, 2019, in Xalapaat the age of 87. (CNS/Paul Haring)

Cardinal Sergio Obeso Rivera, retired archbishop of Xalapa, Mexico who was created a cardinal by Pope Francis a little over a year ago, died at the age of 87.

According to Vatican News, Obeso died Aug. 11 in Xalapa.

In 1931, he was born into a prominent family, which founded and operates one of Mexico's main supermarket chains. Despite his upbringing, colleagues described the cardinal as austere and unassuming.

He entered the seminary in 1944, studied philosophy and theology in Rome and was ordained a priest there in 1954. After his ordination, then-Fr. Obeso held various positions at the seminary in Xalapa and eventually was appointed rector.

He was appointed bishop of Papantla in 1971 but returned to Xalapa, the Veracruz state capital, in 1974 as coadjutor archbishop. He became archbishop in 1979.

Among his accomplishments before retiring in 2007, then-Archbishop Obeso led the Mexican bishops' conference for nine years and worked closely on ending the official estrangement between Mexico and the Vatican.

In May 2018, Francis announced that the retired archbishop would be among the 14 prelates created as cardinal.

Obeso and two other prelates over the age of 80 were chosen for having "distinguished themselves for their service to the church," the pope said.

Church observers said Obeso's inclusion into the College of Cardinals was an overdue recognition for the prelate, whose pastoral approach and personal austerity were seen as similar to those of Francis.

After the announcement of his elevation, the Mexican bishops' conference praised Obeso as a "simple and austere man, extremely helpful and attentive to the social realities of Mexico."

While in Xalapa, he promoted the canonization of St. Rafael Guizar Valencia, patron of the Archdiocese of Xalapa, and as a retired archbishop, "continued celebrating worship and announcing the Gospel," the bishops' statement said.

According to Vatican News, Obeso will be buried in the city's cathedral after a funeral Mass Aug. 13.

His death leaves the College of Cardinals with 216 members, 119 of whom are under the age of 80 and therefore eligible to vote in a conclave.