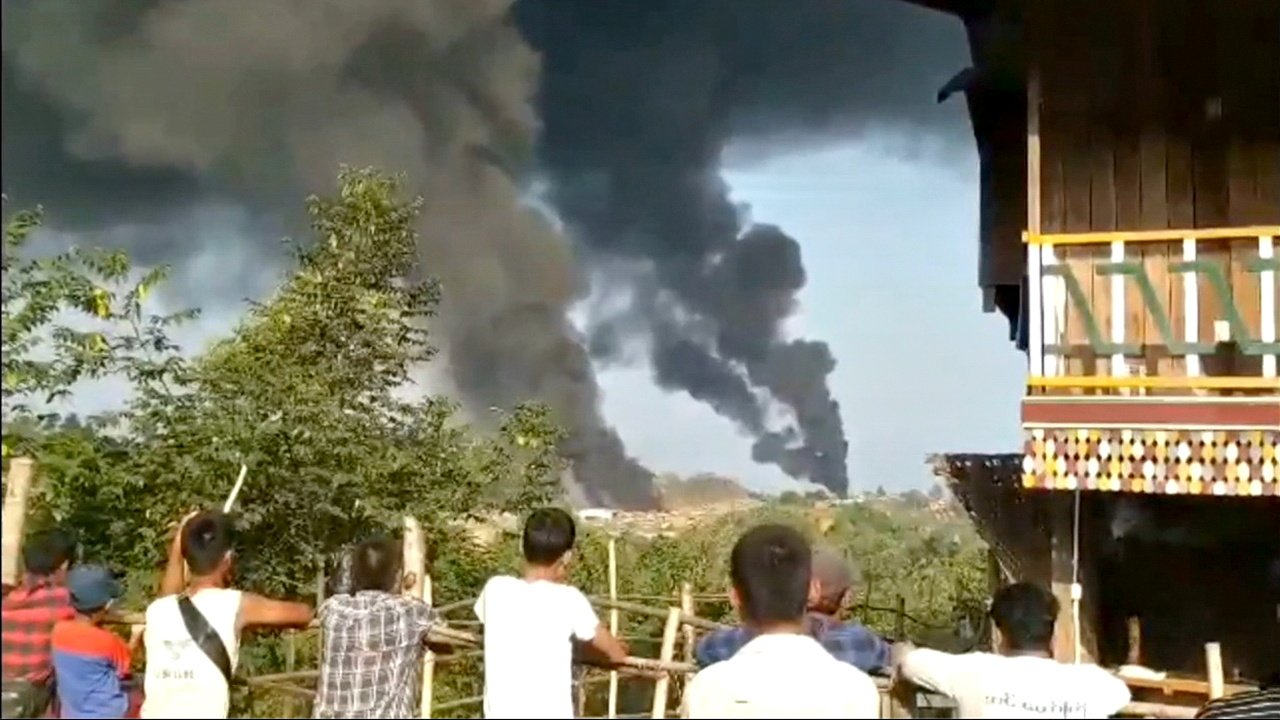 People look at thick columns of black smoke from Hkamti, Myanmar, May 22, 2021, in this picture obtained from social media. Cardinal Charles Bo of Yangon called for an end to violence after a deadly mortar attack May 23 claimed the lives of four people sheltering inside a church in a town in eastern Myanmar. (CNS/News Ambassador via Reuters)

Cardinal Charles Bo of Yangon, Myanmar, pleaded for an end to violence after a deadly mortar attack in his country claimed the lives of four people sheltering in a church.

In a statement posted on his Twitter account, Bo, who also serves as president of the Myanmar bishops' conference, expressed his anguish over the May 23 attack on "innocent civilians who sought refuge in Sacred Heart Church" in Kayanthayar, a town in eastern Myanmar near the country's border with Thailand.

"The violent acts, including continuous shelling, using heavy weaponry on a frightened group of largely women and children, resulted in the tragic death of four people and wounding more than eight," he wrote May 25.

The Southeast Asian country has been rocked by violence since Feb. 1 after the military seized power and overthrew the elected civilian government. Myanmar had been ruled by the military for more than 50 years before Aung San Suu Kyi's elected government took office in April 2016.

Since the coup, protests against military rule have led to deadly confrontations and have gained attention from world leaders, including Pope Francis, who celebrated a Mass for peace in St. Peter's Basilica May 16 with Catholics from Myanmar living in Rome.

Catholics, who are a minority in Buddhist-majority Myanmar, have played an active role in praying for a peaceful solution, participating in pro-democracy protests and supplying material and moral support to the needy and the families of deceased protesters.

In his statement, Bo said the extensive damage to the church bore "witness to the intensity of the attack on a place of worship" which forced many to flee into the neighboring jungle.

"Their fate is still not known to the outside world. Food, medicine and hygiene are urgent needs but there is no way of reaching them. There are many children and old people among them, forced to starve and without any medical aid," he said.

This, the cardinal added, "is a great humanitarian tragedy."

Bo also used his statement to insist that places of worship are "cultural property" which, along with hospitals and schools, are "protected during conflict through the Hague Conventions."

He condemned the killing and wounding of unarmed civilians who "were inside the church to protect their families" and urged efforts for peace and a de-escalation of the conflict.

"This needs to stop," Bo wrote. "Our people are poor, COVID-19 robbed them of their livelihood, starvation stalks millions, the threat of another round of COVID-19 is real. Conflict is a cruel anomaly at this moment. Peace is possible, peace is the only way."