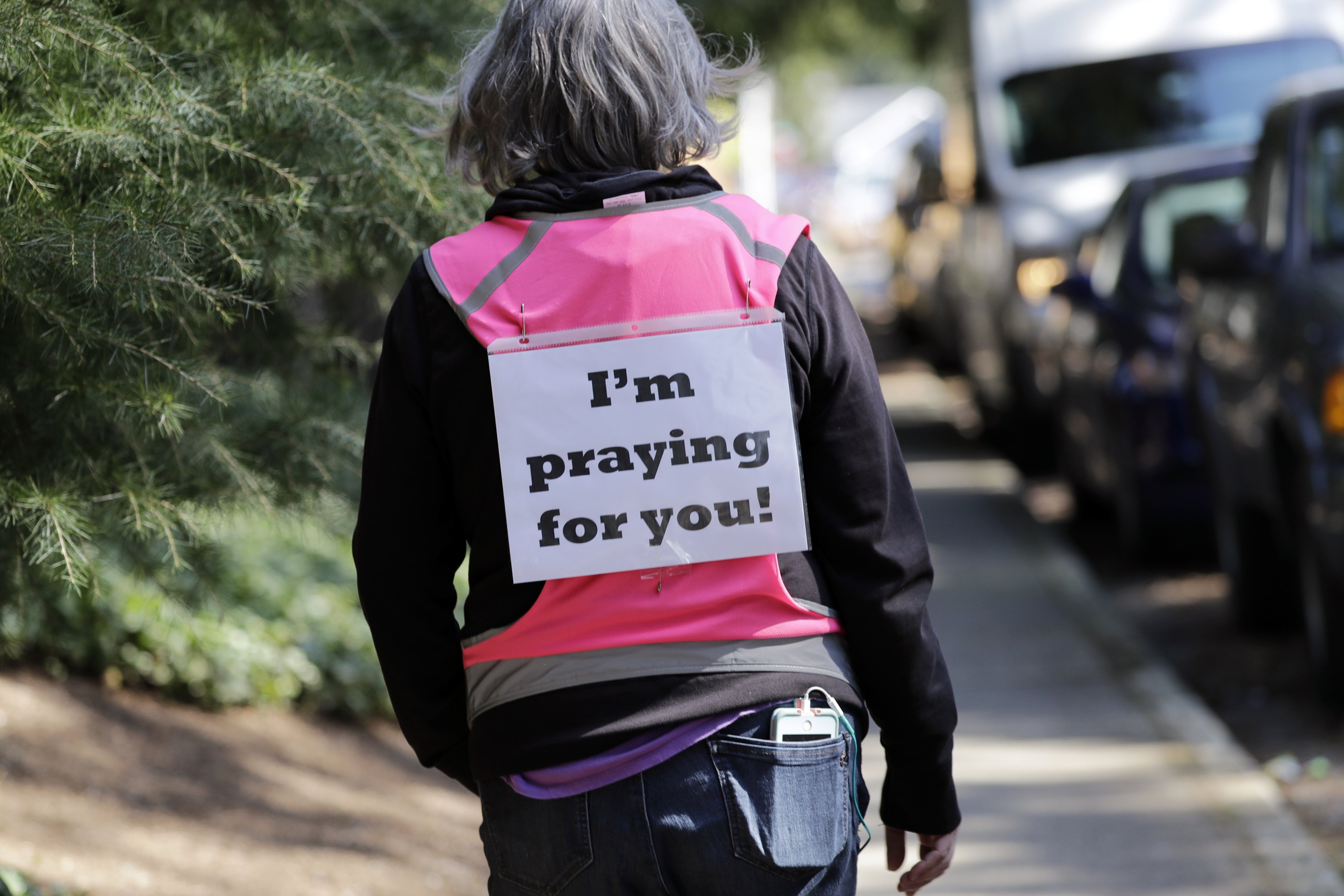 Lois Casimes wears a sign in support of residents and health care workers as she walks past the Life Care Center, where at least 30 coronavirus deaths have been linked to the facility, Wednesday, March 18, 2020, in Kirkland, Washington. Casimes, from nearby Bothell, Wash., wanted to take the time to walk in the neighborhood and pray for people at the facility. Staff members who worked while sick at multiple long-term care facilities contributed to the spread of COVID-19 among vulnerable elderly in the Seattle area, federal health officials said Wednesday. (AP/Elaine Thompson)

The National Day of Prayer, like most events amid the coronavirus, will have a different look this year as it is marked on May 7.

Now in its 69th year, the observance — often predominated by evangelical Christians gathering in public places — will feature interfaith and even international voices on computer screens and cellphones.

For the first time, Religions for Peace USA has organized a National Interfaith Prayer Service for Healing & Hope via Facebook and Zoom.

"Of course, we do pray separately in our own religious communities but it's also important for us to come together to pray together and uplift our common humanity and pray for everyone," said Tarunjit Singh Butalia, executive director of Religions for Peace USA.

"Some of our own religious communities, ethnic and others who are poorer, have been in fact quite severely hit with the pandemic so we need to come together and pray for everyone because we're only as secure as the very least among us," he added.

Anuttama Dasa, director of communications for the International Society for Krishna Consciousness, said he plans to participate in the Religions for Peace afternoon event. He said he thinks the coronavirus has made Americans of many faiths realize the benefits of prayer for strength and guidance.

"I also hope more and more people this year realize that those doctors and nurses on the front lines include Hindus, Buddhists, Muslims, Hare Krishnas, Sikhs, and the whole diverse spectrum of faiths," said Dasa, who is a board member of the U.S. chapter of the interreligious organization, in an email to Religion News Service.

"I have two friends, Krishna devotees in the DC/Baltimore area, both anesthesiologists, one African American and one Indian American, risking their lives in COVID units, and I know they are praying their Krishna prayers for each and every patient."

The National Day of Prayer was created by Congress in 1952 and has been observed on the third Thursday of May since 1988. In the law's original language, churches were the only houses of worship specifically mentioned. It described the day as one "on which the people of the United States may turn to God in prayer and meditation at churches, in groups, and as individuals."

The National Day of Prayer Task Force has held a National Day of Prayer observance featuring prominent evangelicals since 1983. In recent years, in addition to promoting tens of thousands of events from churches to courthouses, leaders such as former Southern Baptist President Ronnie Floyd have presided over a prayer service in the U.S. Capitol. President Donald Trump held Rose Garden ceremonies the last two years on the day, featuring speakers of Christian, Jewish, Hindu and Muslim faiths. However, evangelical leaders seemed dominant among both speakers and audience members, including some of Trump's unofficial advisers.

But in 2020, with coronavirus social distancing in place, the task force's listing of events by ZIP code show many in "virtual" rather than physical locations. Its national event, co-hosted by Will Graham, grandson of evangelist Billy Graham, is set to be broadcast and livestreamed on May 7 evening.

"This year, while some communities may have the ability to gather in small numbers, we encourage observing all local health guidelines and social distancing recommendations that are in place," said Dion Elmore, the task force's vice president for marketing and public relations. 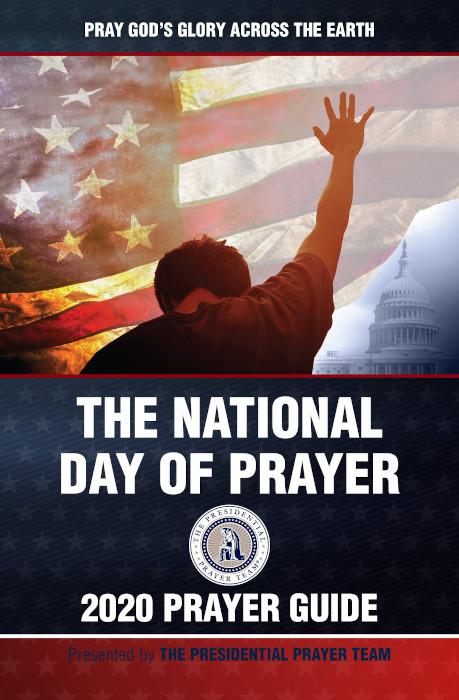 Cover of The Presidential Prayer Team’s 2020 Prayer Guide for the National Day of Prayer. (Courtesy image)

The Presidential Prayer Team has likewise focused on online initiatives, requesting people to sign up for a "prayer room" time slot to pray for national leaders and offering a guide for the prayers that lists Trump and his Cabinet members.

"As we continue to face the unique challenges posed by the coronavirus pandemic, millions of Americans are unable to gather in their churches, temples, synagogues, mosques, and other houses of worship," said Jim Bolthouse, president of the nonpartisan prayer ministry, in a statement. "The ability to bring praying Americans together virtually on the National Day of Prayer has never been more important."

Some Christian groups that have not previously promoted the prayer day have chosen to observe it in their own ways this year.

The Rev. Jennifer Copeland, executive director of the North Carolina Council of Churches, said her ecumenical organization wanted to celebrate a period of " Joyful Noise " as a show of solidarity amid the lack of physical togetherness in COVID-19 times. Initially, council members thought solely of ringing church bells but are now urging that a range of religious expressions be heard at noon on May 7.

"Everybody has a kind of call that brings them into worship together — sometimes it's sung, sometimes it's spoken and sometimes it's bell ringing," she said. "And what we wanted to do is send this hope-filled message across North Carolina, that we will all be together again in person at some point. There will be a day after."

At a Catholic church in Durham, North Carolina, members have been asked to select a handbell from a case inside the church, wipe it down and step outside to ring it at noon for five minutes (all while "maintaining social distance" and wearing masks). Other churches plan to have bells ring from their towers or carillons. For her part, Copeland, a United Methodist minister who expects to be able to hear church bells from her front porch, plans to ring a schoolroom bell once used by her great-grandmother: "I'll just add my little bell to the noise."

Another new approach comes from the United Church of Christ, which plans to observe an Interfaith Day of Prayer on Instagram and Facebook. The "day of healing and hope" will feature prayers for wholeness and health. The progressive denomination will post prayers over a 24-hour period by more than 40 leaders from the Christian, Jewish and Muslim faiths on its social media accounts and invite others to add their own.

"On this National Day of Prayer it is as important as it has ever been to be reminded of our interconnectedness with one another and all of creation," said the Rev. Traci Blackmon, the UCC's associate general minister of justice and local church ministries. "We are deeply grateful for this diverse group of faith leaders, serving in varied spaces, who have agreed to lead us in prayer each hour in ways that connect our hearts, honor the holy and amplify our cries."

Just like in other years, there are those who are not in favor of a nationally designated day set aside for prayer. The American Humanist Association, for instance, hailed the May 1 introduction of a congressional resolution supporting a National Day of Reason. The measure did not move further in the House of Representatives, whose date of return to the Capitol is not certain.

But the U.S. observance will have a global dimension, with the Israel-based Elijah Interfaith Institute planning an installment of its online "coronaspection" series timed to the prayer day and Ramadan — a month of intense prayer and fasting for Muslims — featuring a Catholic bishop, a rabbi and a Muslim scholar discussing solitude.

Rabbi Alon Goshen-Gottstein, its director, said he and other interreligious leaders view the pandemic as a time to move beyond religious isolation in the U.S. and around the world.

"It's almost an intuitive outcome that, whether specifically for the day or because it's more broadly in the air, it's a time for religions to open up to the other," he said. "The virus doesn't distinguish between us and therefore our efforts in addressing it, both physically and spiritually, should not distinguish between us."