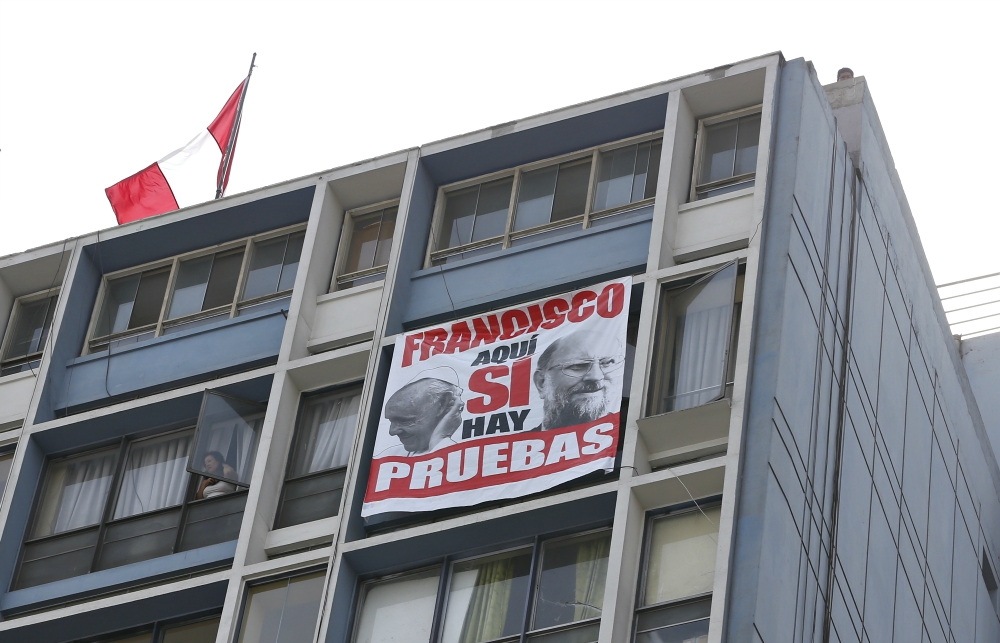 A protest banner that says in Spanish, "Yes, Francis, here there is proof," hangs outside the cathedral in Lima, Peru, Jan. 21. The banner protests Pope Francis' defense of Bishop Juan Barros of Osorno, Chile, who is accused of protecting a priest the Vatican found guilty of sexual abuse of minors. (CNS/Paul Haring)

Pope Francis is suddenly in the midst of a crisis that could damage his papacy irreparably. It swirls around his handling of an issue millions of his admirers believed he was especially equipped to resolve — clergy sex abuse. His personal touch, marked by modesty, candor, compassion, social justice and humor raised hopes that he could stanch the scandalous bleeding. Such optimism arguably became decisive in his election to the papacy.

But that potential is being questioned by his testy reactions this past week to criticism that Bishop Juan Barros, a Chilean bishop he appointed in 2015, had covered up many sexual crimes by a high-profile priest, Fr. Fernando Karadima, a close associate of Barros'. The Vatican found Karadima guilty in 2011.

Francis' open, charming demeanor faded as he angrily chided critics, including those claiming to have been victims of the priest, who contend Barros buried evidence.

"It is calumny," he snapped. "Is that clear?" Denying any evidence against the bishop, he added, "The day they bring me proof against Bishop Barros, I will speak."

In the face of adverse reactions to his comment, Francis allowed that a potential witness against the bishop may see it as a demand to "bring me a letter with the proof" and as a "slap" in the face, but otherwise held his ground.

Victims claim that they can supply evidence but that the pope's hasn't met with them to allow them to state their case.

The standoff became the centerpiece of the Chilean stop on the Jan. 15-21 papal visit to South America.

It isn't unusual, of course, to find opposing views on the same incident. If the pope is right, he deserves praise as a protector of human rights. He will stand as a much-needed champion of fair treatment of the accused.

What potentially lends this controversy particular significance is that it appears to reveal a side of the pope that contrasts with his popular image as a "people of God" leader who ordinarily grants a hearing and dignity to the rank and file of the church. He is a "leveler" who has mocked the pretenses of elite church officials and identified strongly with the poorest and most workaday Catholics in his vast community.

The rebuke to those very Catholics in Chile who appear to fit that profile poses the troubling question. While his denunciation of social ills was in line with his papacy, his outburst in defense of his appointed bishop shocked many observers. The fact that the flare-ups continued over the next days added an element of surprise and hinted at something more profound.

For Francis to speak harshly and dismissively to people who claim sexual abuse by clergy may be a passing incident. But given the subject and the circumstances, it could portend a major stumbling block: inability to face clergy sexual abuse and cover-up when it hits home.

This obstacle has already caused the downfall of clergy from all ranks. It involves the most volatile parts of personal pride and defensiveness. When the imperative is to look for that speck in one's own eye rather than log in the eye of the other, the normal coping mechanisms often shut down.

If the pope has shown an outsized response to this grievance in Chile, it may be because one of his own bishops is under suspicion, a matter we might presume is very personal. No doubt it's just as hard for a pope believe allegations against a valued colleague as it would be for any of us.

I'm not assuming that's the case, but the fiery, categorical retorts from Francis sound as if they come from a place we haven't known in him.

If the reason was that he felt fervently convinced Barros has been wrongly treated and felt compelled to defend him, there's honest courage in that. If evidence isn't being sought and victims' accounts aren't being solicited in pursuit of truth, however, then a papacy's legacy might be on the line.