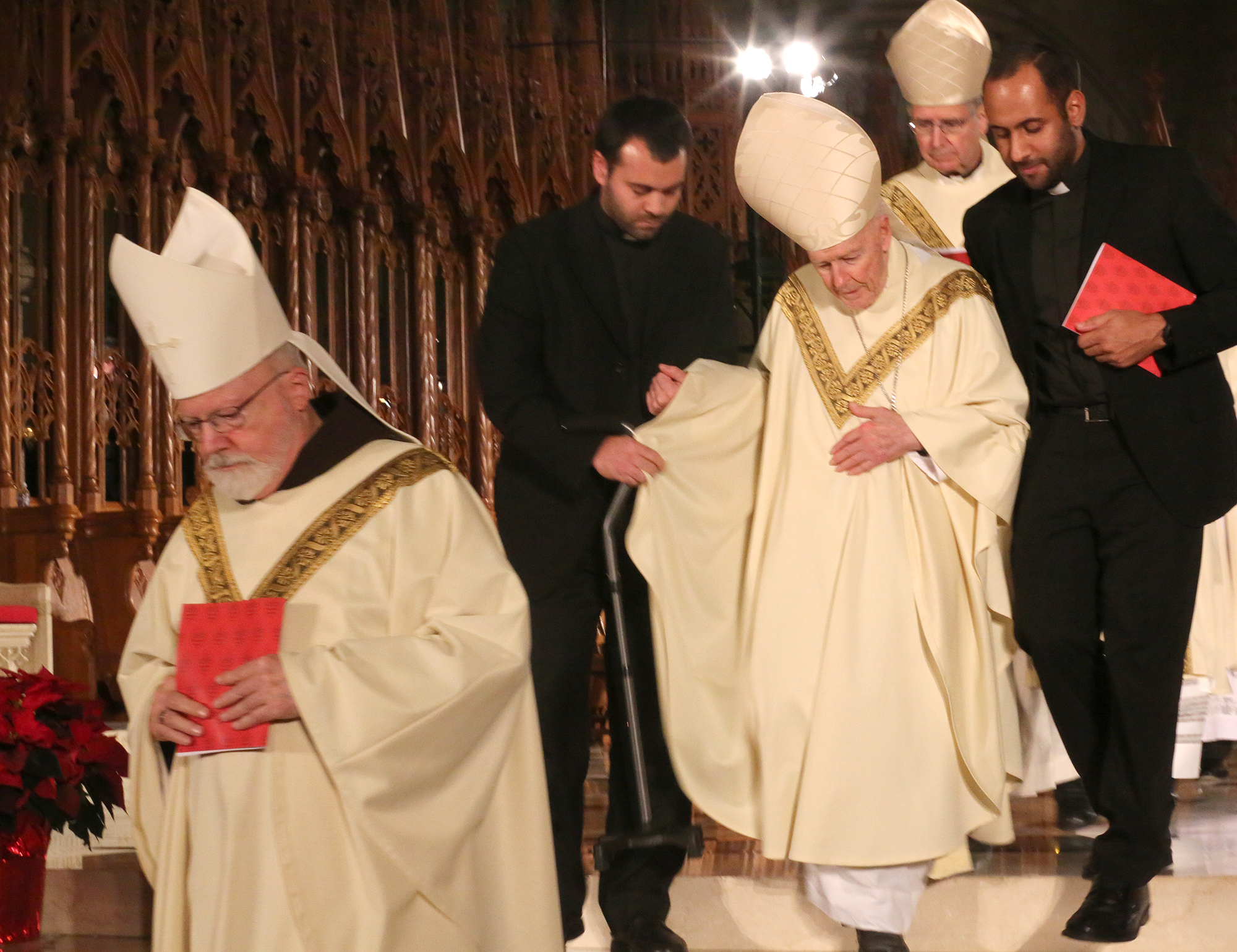 The Boston Globe and the Philadelphia Inquirer newspapers teamed up for an article published in both daily papers Nov. 4 that examined ways it said the U.S. bishops have failed to police themselves even since their 2002 gathering in Dallas about clergy sex abuse when they "promised that the church's days of concealment and inaction were over."

The nearly 6,000-word article examines allegations of bishops covering up sexual abuse by priests in their dioceses or their own reported sexual misconduct. It was written by two current members of Globe's Spotlight investigative team and another writer who was part of the Spotlight team that received the 2003 Pulitzer Prize for the team's coverage of the clergy sexual abuse crisis in 2002. It also was written by a team of journalists from the Philadelphia Inquirer.

A sidebar to the story, which was published online Nov. 3, notes that "Boston and Philadelphia have been ground zero for the Catholic clergy sex abuse scandal — both cities have endured years of church investigations, allegations, prosecutions, and lasting scars."

An op-ed posted Nov. 3 on the Inquirer's website by Philadelphia Archbishop Charles Chaput said the paper has done "valuable reporting and editorializing on sex abuse in the Catholic Church and past failures by the church to root out abusers and to protect the innocent. The entire public — including Catholics — can be grateful for that."

But he also said: "It's been odd to notice that the Inquirer has often seemed less committed to reporting the history, roots, scope, and intractability of chronic sexual-abuse problems in our public schools, institutions, and society at large — and even less interested in what the church has done and is doing to deal with the problem."

He said the church's efforts to provide healing to victims of sexual abuse "have routinely been ignored or under-reported by media in the public sphere. Despite ample evidence of the scope of the sexual abuse problem beyond the Catholic Church, some continue to perpetuate the lie that the sexual abuse of minors is lopsidedly a 'Catholic' problem and that the church has done little to address it."

A Nov. 4 statement from the Boston Archdiocese said: "The report today in the Boston Globe examining how various bishops in the United States have addressed the clergy sexual abuse crisis provides a window into the depth of the problem facing the church."

It also noted that Boston Cardinal Sean O'Malley has "made it a priority to create safe environments in the archdiocese's churches and schools and to continue to support all people impacted by clergy sexual abuse." The archdiocese said it "began disclosing the identity of publicly accused priests of the Archdiocese of Boston in 2011" and no new allegations of abuse have occurred since 2006.

"We have learned much during the course of the past 16 years and made sweeping and significant changes to all dimensions of the life of the church, but we cannot be lulled into a sense of achievement that would risk complacency," O'Malley said.

The Globe/Inquirer said that amid new revelations of alleged misconduct by U.S. bishops or reported mishandling of abuse cases, the newspapers had "pooled their resources for a deeper look at the crisis" and as they put it, they "visited nine states, conducted scores of interviews, and reviewed thousands of pages of court and church records to produce this report," which received funding from the Lenfest Institute for Journalism, a Philadelphia nonprofit group dedicated to local journalism.

Revelations the newspapers cite include the August release of a Pennsylvania grand jury report covering 70 years of abuse allegations in six of that state's Catholic dioceses, starting in 1947. The grand jury detailed allegations of abuse by 300 clergy and other church workers and involving 1,000 minors. The report also claimed a church cover-up of abuse in some places.

Also, allegations came to light this summer involving retired Archbishop Theodore McCarrick, accused of sexually abusing a minor almost 50 years ago and having sexual contact with seminarians while he was a bishop in New Jersey. He has denied the allegations.

Although the article is the same in both papers, there are some differences in design and graphics and each ran its own headline. The Philadelphia Inquirer story has the headline: "Failure at the top," with the subhead: "America's Catholic bishops vowed to remove abusive priests in 2002. In the years that followed, they failed to police themselves."

The article does not mention previously unreported cases of alleged abuse or cover-up claims but delves into details about known cases and follows up with where it says many of these bishops are now: often in secluded retirement, still receiving a church pension.

The piece looks at reports of alleged abuse — or claims of a cover-up of abuse — by bishops who once headed the dioceses of Wheeling-Charleston; Kansas City-St. Joseph, Missouri; Cheyenne, Wyoming; as well as the Archdiocese of St. Paul and Minneapolis, when it was headed by Archbishop John Nienstedt, who resigned in June 2015.

For the past three years, Archbishop Bernard Hebda as the current shepherd of the Minnesota archdiocese has led the church there through bankruptcy proceedings to settle sex abuse claims from previous years; the archdiocese is now out of bankruptcy. He also has reached out to abuse survivors and made many pastoral visits to parishes.

The Globe/Inquirer report says that "more than 130 U.S. bishops — or nearly one-third of those still living — have been accused during their careers of failing to adequately respond to sexual misconduct in their dioceses" according to the reporters' examination of court records, media reports and interviews with church officials, victims and attorneys.

It also notes that at least 15 bishops, including McCarrick, former cardinal-archbishop of Washington who resigned from the College of Cardinals in July, have been accused of committing sexual abuse or sexual harassment.

What the article points out as "most telling" is that "claims against more than 50 bishops center on incidents that occurred after a historic 2002 Dallas gathering of U.S. bishops" when they voted to remove any priest who had ever abused a minor and set up civilian review boards to investigate clergy misconduct claims.

Although the 2002 "Charter for the Protection of Children and Young People" imposed standards that led to the removal of hundreds of priests, "the bishops specifically excluded themselves from the landmark child protection measures," the report claims.

This gap is one that U.S. bishops plan to address in mid-November during their annual fall general assembly in Baltimore when they plan to discuss and vote on specific measures to hold themselves accountable for their response to clergy sex abuse allegations in their dioceses.

Since Aug. 1, Cardinal Daniel DiNardo of Galveston-Houston, president of the U.S. Conference of Catholic Bishops, has issued five statements responding to various aspects of the sexual abuse crisis and has called for greater transparency and accountability in the church, particularly on the part of the bishops. In mid-September at the Vatican, DiNardo met privately with Pope Francis specifically about clergy sexual abuse in the U.S.

In a Nov. 4 letter to Catholics in the Archdiocese of Newark, New Jersey, posted on the archdiocesan website, Cardinal Joseph Tobin responded to the Globe/Inquirer report, saying that although "the information must be verified, even one situation in which a bishop violated our 'Charter for the Protection of Children and Young People' or did not put victims' needs first is a grave concern."

He said after McCarrick's resignation from the College of Cardinals, "we are now realizing that some bishops did not enter into the covenant we call the 'Charter for the Protection of Children and Young People' wholeheartedly. This is sinful and unacceptable. It has caused irreparable harm to every priest's and bishop's relationship with the faithful. Only intentional acts of restorative justice can help us reform and renew our deeply wounded church."

As the Globe/Inquirer piece points out: "This month, U.S. bishops will gather in Baltimore to debate — once again — how to regain the trust of the faithful."

Julie Asher contributed to this story.