Nuns on the Bus meet tea party protests in Ohio 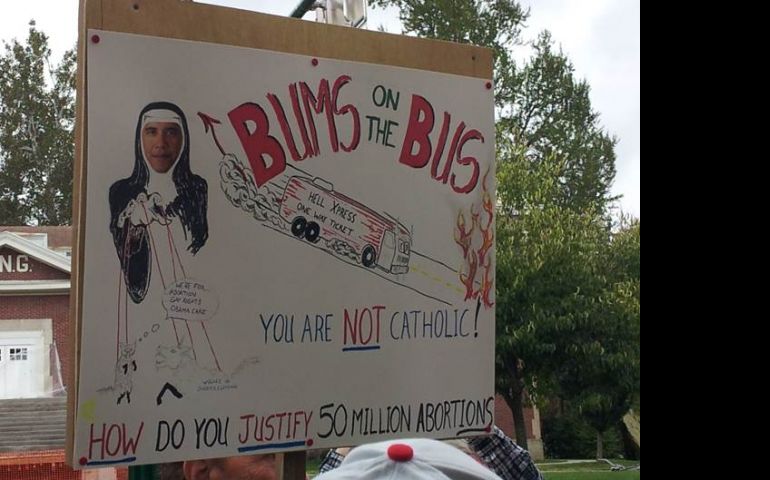 The Nuns on the Bus have been a consistently popular and effective faith-based tool for religious progressives this campaign season, but on Monday a group of demonstrators apparently organized by a local tea party affiliate met the nuns at a stop in Marietta, Ohio, and provided a far different welcome than the sisters usually receive.

Holding placards with slogans like "Bums on the Bus" and "Romney-Ryan Yes, Fake Nuns No," the protesters focused their fire on the abortion issue, accusing the sisters of not being sufficiently anti-abortion.

Someone claiming to be a member of the local "We the People" chapter -- that is the name used by some tea party affiliates in the region -- posted a YouTube video of the counter-demonstrators taken before the half-dozen nuns and about 100 supporters arrived. It says there were more than 175 marchers opposing the nuns, and it shows the demonstrators praying the rosary and singing hymns before challenging the sisters.

"What could be more innocuous, unless of course the nuns happen to be a group of radical, feminist ideologues whose previous political actions have been so out of step with the teaching of the Catholic Church that they have been condemned by the Vatican," the YouTube poster wrote in text accompanying the footage.

Sr. Simone Campbell, who leads the Washington-based NETWORK, a left-leaning Catholic social justice group, has spearheaded the Nuns on the Bus tours and spoke against the budget drafted by GOP vice presidential nominee Paul Ryan during the Democratic National Convention in Charlotte, N.C.

The Nuns on the Bus have stressed social justice causes in their tours of areas hard-hit by the recession, and many conservative critics and political activists say their message shortchanges the abortion issue.

The sisters reject that criticism, and one of the nuns on the bus, Dominican Sr. Monica McGloin, on Monday told the protesters in Marietta that "we are 100 percent pro-life."

"As many of your signs are showing, we believe life begins at conception and ends with natural death," McGloin said in remarks that were transcribed by Faith in Public Life, a liberal advocacy group that has provided media support for the sisters.

"And that we do not see focusing on one issue, one point of life, as a way that we should proceed. And that pro-life for us means that we do concern ourselves with living wage, just wage, access to healthcare, education, food, housing, care for our seniors, Medicare and other kinds of healthcare programs that are supportive. Providing daycare for children so their parents can work ...

"So we know from talking with people that what the people want is to continue to support the services that are helping us remain healthy, wholesome communities. So that’s what pro-life is."

"So what we’re hearing people say is that giving tax cuts to the very wealthy is not the way to go. Trickle-down will not provide jobs. What we’re seeing is the real job creators are the sisters, the nuns, the people who operate in these not for profits, the people who operate in our local governments. They’re the ones that are doing the job creation. Not the wealthy -- who seem to be saving their money -- so they become wealthier."

McGloin directed the protesters to their only proposal, at FaithfulBudget.org, for "principles that should really undergird any budget we have. Because no matter who gets elected in November, we are going to need a budget."

Monday's confrontation came on the final day of a weeklong tour by the Nuns on the Bus, at a morning stop near the local office of Republican congressman Bill Johnson.

The sisters had to be escorted through the protesters to reach Johnson's office, where they met with the congressman.

"Basically we wanted to talk to him about our trip ... and express the concerns that we've heard," McGloin told the Marietta Times. "People are really concerned about the notion that would give tax breaks to the wealthy while we're cutting funds that support programs that help people and communities."

| Nuns on the Bus meet tea party protests in Ohio