Bob Dylan explores death to self in 'Rough and Rowdy Ways' 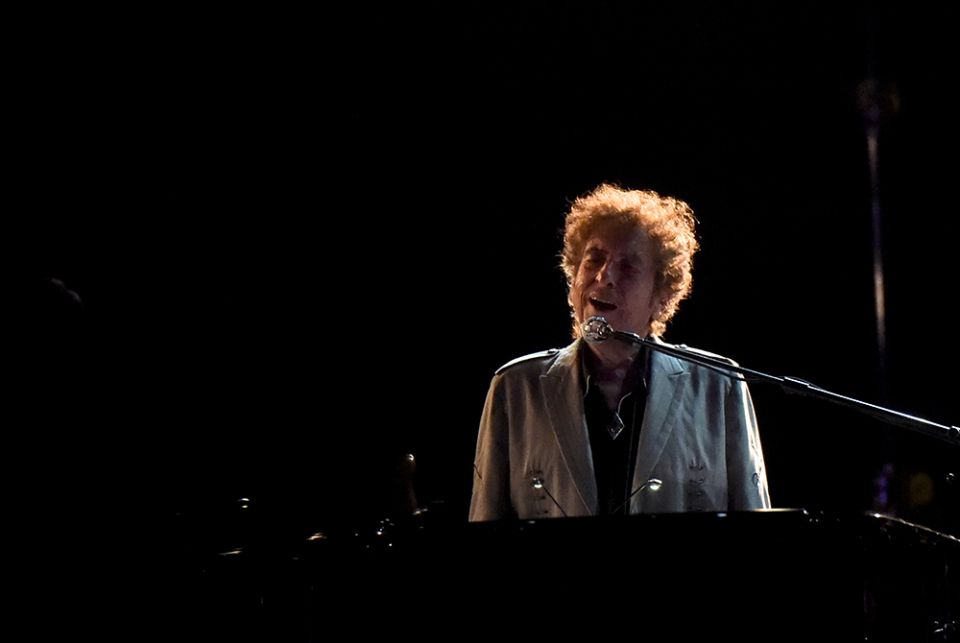 One of the bright spots for me during the COVID-19 summer of 2020 was the unexpected release of a new Bob Dylan album in June. The album, entitled "Rough and Rowdy Ways" was announced via social media after Dylan released two of its tracks earlier during the pandemic. 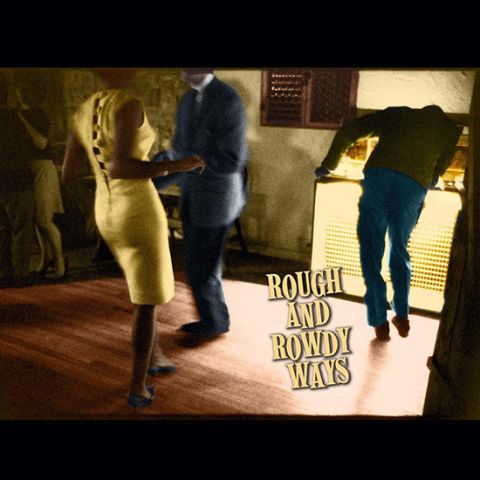 Being an obsessive Dylan fan, I very much looked forward to what the Nobel Prize laureate had to offer the world during this unprecedented time.

Dylan's last album of original material was in 2012 with the release of "Tempest." (In fact, the first track that was released from the new album, "Murder Most Foul," was most likely an outtake from that album.)

Once again, the singer-songwriter does not disappoint, and even as he approaches his 80th birthday, he is still able to reinvent himself and surprise even his most loyal fans. The dark sound and lyrics of the album initially suggest Dylan's personal wrestle with mortality, yet I find that this record is not a "swan song" or the musings of an old man who is waiting to die. "Rough and Rowdy Ways" highlights an ongoing death to self, which every person must choose to embrace.

In 2018, author Robert Hudson released an engaging book entitled The Monk's Record Player: Thomas Merton, Bob Dylan, and the Perilous Summer of 1966. The book highlights the famed monk's profound interest in the music and lyrics of Dylan. The image of Merton cranking up "Bringing It All Back Home" on vinyl in his hermitage with visitors, who included the 83-year-old French philosopher Jacques Maritain, is amusing to say the least! Yet, what Merton recognized in Dylan's earlier records can be equally applied to what Dylan unknowingly recognizes now in Merton's writings.

In the early pages of New Seeds of Contemplation, Merton writes that "contemplation is always beyond our own knowledge, beyond our own light, beyond systems, beyond explanations, beyond discourse, beyond dialogue, beyond our own self. To enter into the realm of contemplation one must in a certain sense die: but this death is in fact the entrance into a higher life. It is a death for the sake of life, which leaves behind all that we can know or treasure as life, as thought, as experience, as joy, as being" (emphasis mine). 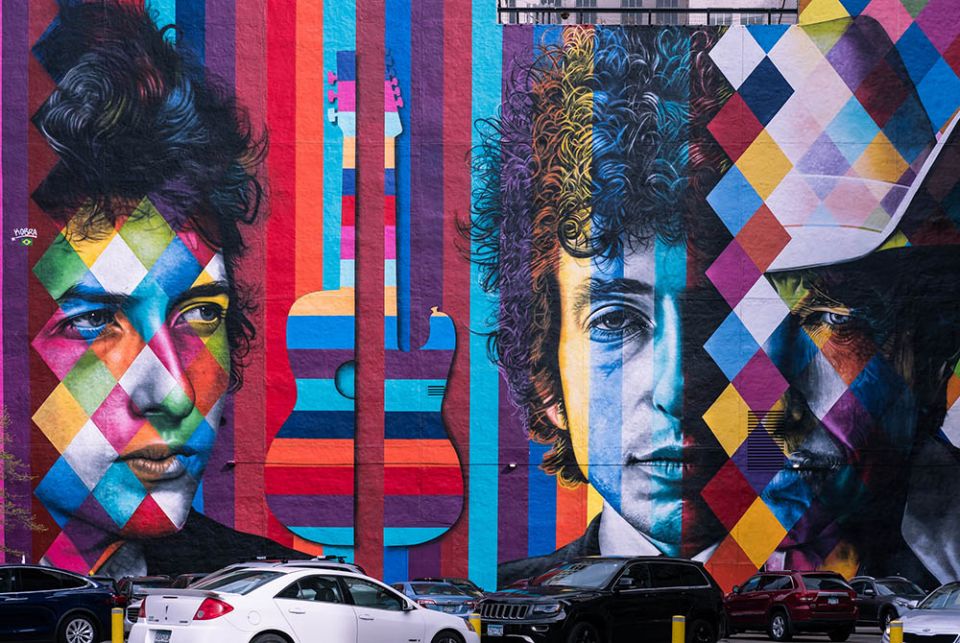 A mural of Bob Dylan in Minneapolis, Minnesota (Flickr/Sharon Mollerus, CC by 2.0)

Throughout "Rough and Rowdy Ways," Dylan's allusions to death are clearly more than physical, they are spiritual; yet, not in the sense that the protagonist is preparing his soul for heaven, but in order that one may put to death what Merton calls the "false self" so as to live freely in the "true self."

The tension between the false and true selves is expressed in the opening, Walt Whitman-inspired track "I Contain Multitudes." Dylan sings:

I'll sell you down the river, I'll put a price on your head
What more can I tell ya, I sleep with life and death in the same bed.

The tension continues in the second track, "False Prophet," where the ever-prophetic Dylan croaks:

I ain't no false prophet, I just know what I know. …
Can't remember when I was born and I forgot when I died.

The true self, according to Merton, is discovered through contemplation — a process whereby one no longer finds identity in doing, but in being. To embrace the reality that human existence is of infinite worth is difficult to accept. Dylan sings in "My Own Version of You" of "visiting morgues and monasteries" in order to "create my own version of you."

Who may this you be? It may very well be God — thinking, as we often do, that God's unconditional love is too good to be true. Instead, we burden ourselves with earning God's love rather than receiving it. Yet, there will come a time when we just accept God for who He is:

Dylan has always introduced his listeners to unique characters and places as a means of suspending a space between fact and fiction. In this album we hear of the "Black Rider" (an allusion in the Book of Revelation to the rider of the black horse who holds a scale of balance), Jimmy Reed (the often overlooked blues great), and the Rubicon, (the river that Julius Caesar unlawfully crossed in battle and where, in the song, Dylan trans-historically "stood between heaven and earth").

Another character, the "Mother of Muses," could be the Mother of Christ, Mary. Dylan sings to her as if he was praying to (once again) accept his true self:

Mother of Muses unleash your wrath
Things I can't see, they're blocking my path
Show me your wisdom, tell me my fate
Put me upright, make me walk straight
Forge my identity from the inside out
You know what I'm talking about.

The last two tracks on the album stand out in both their length and how they each reference a president of the United States who was assassinated. In "Key West (Philosopher Pirate)," Dylan unconventionally asserts the death of William McKinley as a transformative moment. Historically speaking, McKinley, the president during the Spanish-American War, indirectly facilitated the displacement of non-fighting Cubans to Key West. Dylan sings of the place as "the gateway key, to innocence and purity" especially if you were "born on the wrong side of the railroad track, like Ginsberg, Corso, and Kerouac." In "Murder Most Foul" Dylan intertwines the historical details pertaining to the assassination of John Kennedy with 74(!) references to songs and/or artists that have been written throughout much of the 20th century.

What could Dylan possibility be doing in this 17-minute epic that fills the entire fourth side of the two-disc vinyl version?

As has been the theme throughout the entire album, physical death provides a motivation for the ongoing death of self. Perhaps there is no better means of expressing death to self than through the art form of music. An assassination is carried out by a person who wants his or her victim to be someone different. We continually assassinate our true self in favor of the false self — a futile struggle that has been expressed in song throughout time.

The songs that Dylan references in "Murder Most Foul" are more than a sentimental journey, they highlight contemplative moments that persistently aid their listeners to understand how to live by being present in the moment. There is no better way of understanding how to be than by just taking in, or contemplating, music and letting it transform you.

In "Rough and Rowdy Ways" Dylan gives us much more to contemplate by listening to a "non-false" prophet who has been contemplating how to be true to self throughout his entire career.

This review is republished with the permission of The Tablet (the Diocese of Brooklyn's diocesan paper), in whose print edition it was originally published.

A version of this story appeared in the Nov 27-Dec 10, 2020 print issue under the headline: Bob Dylan explores death to self in 'Rough and Rowdy Ways' .

Neutrality is not necessarily peaceful