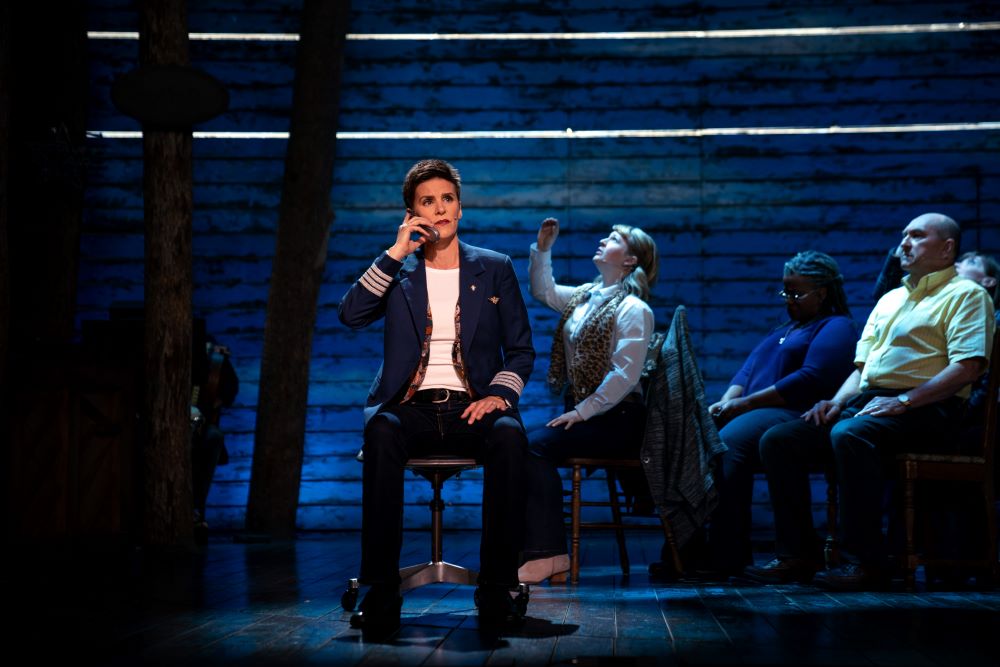 Jenn Colella, who was nominated for a Tony award for her role in Broadway's "Come From Away," plays Captain Beverly Bass in the Apple TV+ live film recording of the stage production. Also pictured are Emily Walton, Q. Smith and Joel Hatch, all of whom play multiple roles in the onscreen recording that premiered Sept. 10. (Apple TV+/Sarah Shatz)

Fourteen months after the pandemic forced Broadway to shut down, the Canadian musical "Come From Away" was filmed in May 2021 at the Gerald Schoenfeld Theatre. The live film recording of the 2015 musical of the same name by Irene Sankoff and David Heih — filmed over four days using 10 cameras — is an incredibly moving, entertaining and inspiring production. The production premiered Sept. 10 — just before the 20th anniversary of 9/11 — on Apple TV+ and the ensemble cast, directed by Christopher Ashley, includes members of the current and original productions. Sankoff and Heih wrote the original book, music and lyrics for the musical and serve as executive producers on the Apple TV+ live film recording.

The Apple TV+ musical, as well as the original, is based on real events. Following the 9/11 terrorist attacks, all air traffic came to a halt, including all flights to and from the U.S. Within hours, all U.S. airspace was cleared.

The Federal Aviation Administration diverted all incoming flights from the northern Atlantic to the airport at Gander, Newfoundland. Mayor Claude Elliott (Joel Hatch) and others stepped up to prepare for 38 planes and the influx of almost 7,000 passengers (and 19 pets, including two bonobos — apes similar to chimpanzees) that nearly doubled the town's population in a day. The planes parked on the tarmac, and no one was allowed to disembark for 28 hours. Anything could happen.

The 7,000 visitors had "come from away" and Gander residents called them "the plane people." By the time this adventure in grace was over six days later, many townspeople and passengers had become friends for life. Something romantic happens — a true story — but you have to watch it to find out.

People were tired, afraid and had little information. A couple from Africa did not speak English. One Newfoundlander saw that they had what looked like a Bible in their own language and figured that the numbering was the same. He found Philippians 4:6 in an English Bible so they could see the situation. When the couple read "Be anxious about nothing" in their Bible, they realized they were among friends.

During an interview with the cast, I asked Hatch and Q. Smith (who plays Hannah, the mother of a New York City firefighter) if they thought there was a providential reason the large Gander airport, built as a refueling station for U.S. military planes, had never been torn down and rebuilt.

He didn’t answer directly, instead sharing a story that did not make it into the play.

Elliott, the now retired mayor of Gander, told Hatch (who played him), that when he became mayor in the late 1980s, the town had already lived through a tragedy. On Dec. 12, 1985, Arrow Flight 1285R, carrying 256 U.S. troops and crew on their way to Fort Campbell, Kentucky, miscalculated the landing and overshot the runway. The plane crashed, killing everyone aboard. Elliott told his staff he never wanted another tragedy like this, so the town created a plan to meet almost any challenge that might come their way. They updated the plan over the years. When the FAA called on 9/11, the key people were in Elliott's office within an hour. "Not one person saved the day, people came together," Hatch said.

Smith added, "I want to be like this, a person of hope, acceptance and kindness" as the Newfoundlanders were to "the plane people." 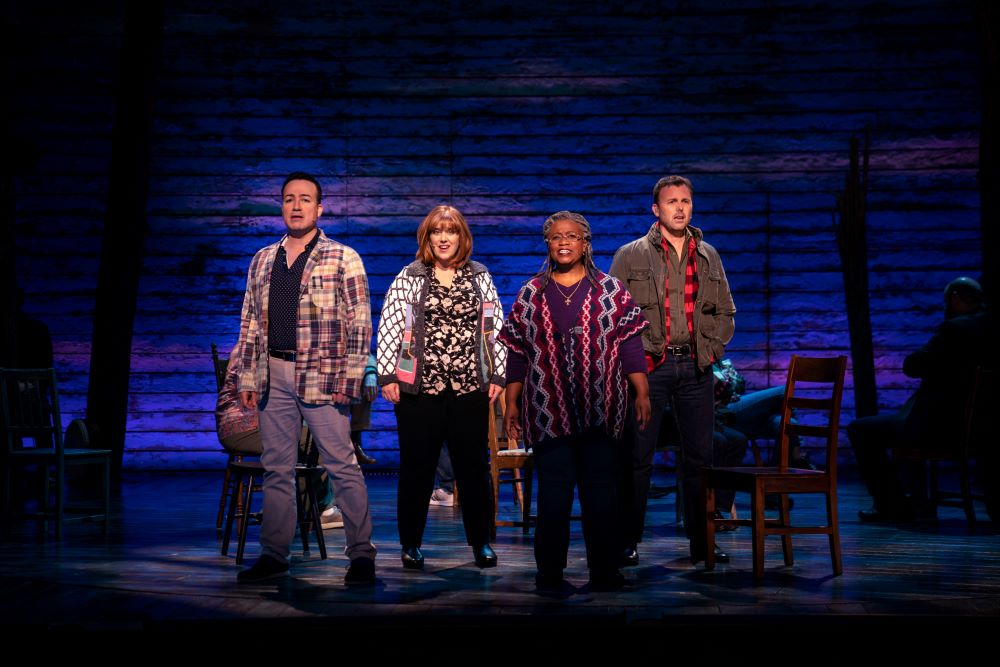 "Come From Away," which premiered Sept. 10 on Apple TV+, is a live film recording of the 2015 musical by the same name and fictionalizes the real story about planes diverted to Gander, Newfoundland, immediately following the 9/11 terrorist attacks on the U.S. From left are Caesar Samayoa, Sharon Wheatley, Q. Smith and Tony LePage. (Apple TV+/Sarah Shatz)

The musical cast of about 12 takes on two or three roles each during the show. The stage setting is an odd assortment of mismatched kitchen-like chairs, perhaps a nod the diversity of the people from away. The chairs, easy to move around, serve as passenger seats and as chapel chairs in the library turned into an inter-religious worship space. Cast members include Petrina Bromley (original cast member) as Bonnie, Jenn Colella as Beverly, De’Lon Grant as Bob, Tony Lepage as Kevin T and Caesar Samayoa (original cast member) as Kevin J/Ali and others.

Faith figures large in this production. The ever-familiar "Peace Prayer of St. Francis" composed by Sebastian Temple (Johann Sebastian von Templehoff) forms a musical centerpiece for hymns from a variety of traditions. This is one of the most moving parts of the film. It is a blended medley of melodic prayer that is unforgettable. The performances of the ensemble cast, script, stage settings, costumes, music, cinematography, editing and production qualities in “Come From Away” are pure harmony.

I started crying at the beginning and cried throughout the almost two hours of the film. … Experiencing this heart-heavy and humor-light musical, I had yet to deal with many 9/11 emotions. This production was very cathartic for me.

In truth, I started crying at the beginning and cried throughout the almost two hours of the film. I was assigned to Staten Island, New York, before the World Trade Center was built and was there as the towers climbed to the sky. I visited the customs house many times for convent business and took numerous visitors to visit the observation deck atop the South Tower. I was in Boston on 9/11, as I wrote for the 10th anniversary of the terrorist attacks, but had spent 13 years watching the skyline and loving the city and its people. Experiencing this heart-heavy and humor-light musical, I had yet to deal with many 9/11 emotions. This production was very cathartic for me.

I asked producers Hein and Sankoff how children responded to the musical. Sankoff replied that the story shows that people are there to help and that "it is a safe place for parents" to talk about what happened on 9/11 because it shows a "revolution of kindness."

Director Christopher Ashley said that the musical does unearth "unresolved feelings, but that it takes good care of the wounded," because producers strove for the authenticity of human collaboration and generosity.

On the fourth taping day, the audience was filled with first responders and front-line workers. I have seen other musicals and plays made into films, but never one with the emotional depth and humanity of this 9/11 tribute to our neighbors to the north. "Come From Away" invites us to rejoice in the heart of human compassion, love and caring 20 years after one of the worst days in U.S. history.

While the story of the diverted plane passengers' stay in Gander may be familiar to those who lived through the events of that day, weeks, months and years that followed, this musical is a powerful witness, simply told and sung, to the soul and ingenuity of humanity that lifted us up during a time of deep sorrow.

*An earlier version of this essay incorrectly cites Ephesians 6:18 as the scripture found by one Newfoundlander in the film. The correct scripture citation is Philippians 4:6.

This story appears in the 9/11: 20 years later feature series. View the full series. 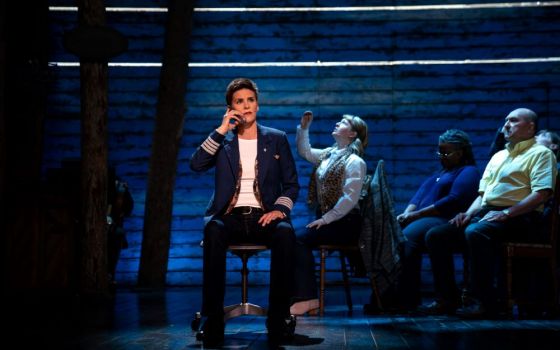 ‘Come From Away’ mixes 9/11 memories with tears and laughter